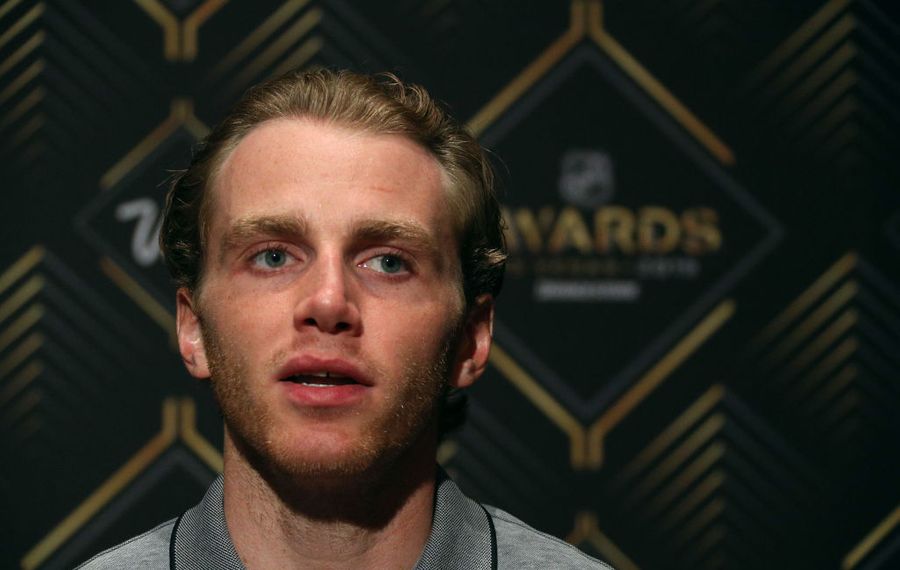 LAS VEGAS – Patrick Kane is a self-professed hockey nerd. The South Buffalo native watched the Stanley Cup playoffs closely as Central Division rival St. Louis capped its run from last place in the league in January to the summit in June. It's a lesson Kane said his Chicago Blackhawks and a lot of other teams can learn from.

"You're just watching as a fan, not really rooting either way," Kane said Tuesday at Encore at the Wynn. "I thought it was a pretty cool story being in the position they were in halfway through the season. That's kind of the position we were in. It goes to show you that you can turn it around pretty quickly in this league."

The Blackhawks had the league's sixth-best record (20-10-3) from Jan. 20 to the end of the season but missed the playoffs by nine points as they dug too deep a hole early and longtime coach Joel Quenneville was fired. Kane had 44 goals and a career-high 110 points but was snubbed as a finalist in balloting for the Hart Trophy as NHL MVP. He's nominated for the Ted Lindsay Award as the players' MVP.

Kane said he's fascinated to see how Chicago GM Stan Bowman works the offseason. The Hawks got some lottery luck to snag the No. 3 overall pick at the draft Friday night in Vancouver and are expected to make other moves to retool their roster under new coach Jeremy Colliton in an effort to snap their two-year playoff drought.

"It's going to be fun to watch the next couple of weeks unfold. I like the position we're in, to be honest with you," Kane said. "We finished the season strong. We had a chance to make the playoffs. I'm happy with the progression.

"I think we got a good coach who really got his feet wet, has a smart hockey mind and it will be fun to play for him from the beginning with him knowing the league a little bit more. We've got cap space and the third overall pick. Interesting to see what happens."

St. Louis center Ryan O'Reilly was still basking in the glow of his team's Stanley Cup victory and his Conn Smythe Trophy as the playoff MVP.

O'Reilly said he was floored by the scope of the team's victory parade Saturday, which culminated in a rally under the Gateway Arch.

"That was one of the coolest things I've seen. It was shocking," O'Reilly said. "We walk out of the arena and it's fairly busy, people on each side of the street going crazy but they we turn a corner and it's a little more nuts.

"The next corner, more people and louder and it just kept evolving to where you couldn't believe it. Every guy was like, 'What just happened?' It was so incredible to see that many people out."

O'Reilly is nominated for the Selke Trophy as the league's top defensive forward and the Lady Byng for gentlemanly conduct. He finished second in the voting for that award last year with the Sabres and won it in 2014 while with Colorado.

He said he was happy to hear he still had plenty of people in Buffalo rooting for a Blues victory over Boston, one of the Sabres' chief rivals in the Atlantic Division.

"The support there was always great," O'Reilly said. "There's a lot of people I still talk to back there. They've always been happy for me and want the best for me and that's great. It's a heck of a hockey town and I enjoyed my time there for sure."

New York Islanders goalie Robin Lehner said he was thrilled to see the accolades for O'Reilly, his teammate the previous three seasons in Buffalo.

"Man, I had chills. Just chills watching that Game 7," Lehner said. "I couldn't be happier for him. One of the best teammates I've ever played with. He set a great example. He was first on the ice, last off every day. He did all the stuff in the gym you should do and he was a quality person to every single player on our team. I don't think anyone can say anything else about him.

"It was tough years for us in Buffalo. I'm just happy to see him having some success. It was a huge deal. He got a Cup and won the MVP. There's no other person I could be happier for than him."

Lehner, who battled back this year from substance abuse and bipolar disorder, is expected to run away with the Bill Masterton Memorial Award for perseverance and dedication to hockey. He's also a nominee for the Vezina Trophy as best goalie.

Mike Harrington: Lehner takes another big step in his personal battle with win over Sabres

The appointment came Tuesday with the announcement that the NHL has joined the Billie Jean King Leadership Initiative to expand "Hockey is for Everyone," a campaign run by the NHL and its players association to promote inclusion on the ice, in locker rooms, boardrooms and the stands.

The council on which Pegula will serve will "demonstrate the league's continue commitment to diversity and inclusion and work to bring about internal change through workplace culture initiatives and employee engagement," according to a news release.

The NHL and the NHLPA also announced the creation of the Female Hockey Ambassador Program, which will provide NHL clubs with funding and enhanced opportunities to use ambassadors – either current or former women's national team players – as community liaisons to promote women's hockey.