Those were Lindy Ruff's final two words to fans in Niagara Square when a rally was held in 1999 to celebrate the Buffalo Sabres' run to the Stanley Cup final.

You all know what they mean. In the annals of Buffalo sports, there is Wide Right and there is No Goal and every other disappointment has to take its place in line.

It was 20 years ago Wednesday when the Sabres suffered an indignity unmatched in the NHL when they lost the 1999 Stanley Cup final on Brett Hull's goal in triple overtime of Game 6. Virtually every Buffalo fan, of course, will go to their grave insisting it should not have counted.

It's still a bitter chapter in franchise history, as close as the Sabres have ever been to the Cup. And it seems like light years away now when you consider that they haven't even made the playoffs for an NHL-high eight straight years.

You think there was controversy about officiating in the playoffs this year? We're talking the Stanley Cup-winning goal here. Ruff called it "our worst nightmare" that night to reporters. Truer words have never been spoken.

"We didn't really know anything on the ice. I found out in the locker room about what happened with the goal just taking off my pads," Hall of Fame goalie Dominik Hasek told The Buffalo News in an interview earlier this season. "I knew it was a huge disappointment. We were upset, so upset.

"I was thinking, 'How could that happen? We were so close. We give up a goal in overtime.' Maybe we were a better team. We don't know. It's Game 6. So close. We've worked so hard for so many years and now it's all over."

If you're too young to remember or just need a refresher of a scene-setter, it goes like this: It was a day with temperatures in the high 80s. Awaiting the start shortly after 8 p.m., fans tailgated all day downtown, many on the surface lot in front of then-Marine Midland Arena that is now the site of Harborcenter. Another 10,000 watched the game on the Big Board down the street at then-Dunn Tire Park, home of the Bisons.

Twenty years beyond No Goal game: Where did you watch it?

With Dallas leading the series, 3-2, the Sabres and Stars were tied at 1-1 in Game 6 through two overtimes as the clock moved past midnight and then 1 a.m. It was a Saturday night, June 19, 1999, that turned into Sunday morning of June 20.

The end came at 14:51 of the third overtime as Hull jammed a loose puck under Hasek to give the Stars a 2-1 victory and their first Cup title. Everything seemed normal. The players bolted on to the ice and cameramen and league officials immediately entered through the Zamboni entrance to document things and set up for postgame ceremonies.

Commissioner Gary Bettman gave the Conn Smythe Trophy to Stars center Joe Nieuwendyk and the Cup to captain Derian Hatcher. The Dallas team paraded it around the ice to mild applause from Buffalo fans, many of whom had quickly left the building due to the Sabres' heartbreaking loss and the ungodly hour. The Stars took the traditional team picture around the Cup and left the ice.

But the normal became weird. As Bettman started to speak, Ruff came back on the Buffalo bench and started to yell at him. The commish never flinched.

"I wanted Bettman to answer the question of why this wasn't reviewed," Ruff said after the game. "He turned his back on me. It was almost as if he knew this goal was tainted."

It wasn't until the Cup had been handed out and ESPN and CBC finally started showing multiple replays that the reason for Ruff's ire was apparent.

Hull's left skate was clearly in the blue paint of the goal crease as he swept the puck under Hasek. Buffalo fans don't like to hear this, but that's a good goal for much of the league's 100-plus year history. The issue was it was absolutely not a good goal during the 1998-99 season, when the league took multiple goals off the scoreboard with a strict interpretation of a player being in the crease.

Why didn't it happen in this case? Conspiracy theorists say the league wasn't prepared to take the goal back once the ice got stormed and the celebration started. Especially since it was nearly 2 a.m.

Officiating supervisor Bryan Lewis made the rounds of the television networks that night, saying the league had sent a memo earlier in the season reminding teams goals were good if the same player who possessed the puck entered the crease to get it if there was no change of possession.

That, the league said, was the reason Hull's goal stood. Of course, no one had ever heard of said memo until roughly 2:30 a.m. that night.

The Sabres were watching replays in their dressing room and getting more infuriated by the second.

"We're in the locker room and all of a sudden somebody said, 'He was in the [bleeping] crease,' '' Hasek said. "My first reaction was 'Let's get back on the ice.' But it's 2 o'clock in the morning and I look at everyone and it's like, 'I'm already out of my pants. It's impossible.'

"I said we should go back out there but then I realized, 'This is stupid.' My jersey is off, one of my pads is off. People would have to wait another 15 minutes to get dressed again. It was pretty clear that nothing can change at that time."

When Hull spoke to reporters in 2009 prior to his induction to the Hockey Hall of Fame, and just after the 10th anniversary of No Goal, the controversy in Buffalo was a prime topic.

"The NHL decided they weren’t going to tell anybody but the teams. … They changed the rule to say if you have control in the crease, you can score the goal, and that’s exactly what it was," Hull said. "But nobody knows that. You can tell people that a million times and they just will not listen.”

Hasek and Hull ended up as teammates in Detroit in 2002, and that's where Hasek finally won his first Cup. The two spent the whole season leaving any discussion of how 1999 ended unsaid, Hull clearly not wanting to bring it up and disturb the ultra-intense Hasek.

"We never once talked about it until we won the Cup and then we were making fun of it. I don't know why," Hasek said. "I just didn't want to talk about it. He didn't want to say a word about it, so we walked around it and we're good friends. Brett is a fun person. He never said one thing about it but then the reporters were asking and we were making fun about it that evening. I think right after the game in the locker room we talked a little and just agreed it was one of those crazy things." 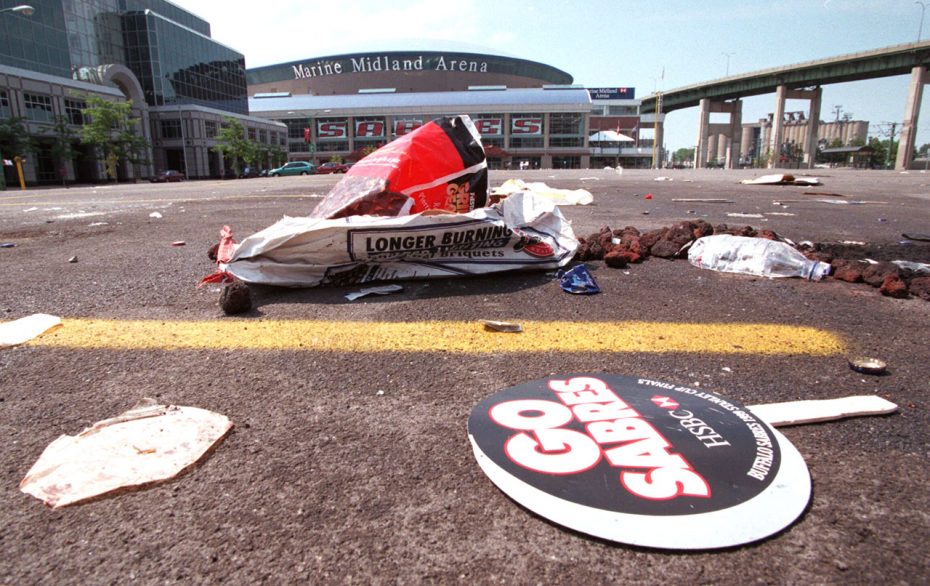 All that remained in the parking lot adjacent to Marine Midland Arena on June 20, 1999, the morning after the Buffalo Sabres lost in the Stanley Cup final to the Dallas Stars. (Robert Kirkham/News file photo)

Hull has been mighty obnoxious with Sabres fans over the years, often tweaking them about the goal. One of the greatest social media trolls ever came in 2012, when Hull unveiled a carved pumpkin that depicted the famous overhead shot of him scoring the goal.

Frivolity aside, Hull has said repeatedly it was the most important goal of his career. And he scored 844 of them between the regular season and playoffs.

"It ranks No. 1 to me,” Hull said. “There was a boatload of people saying when I was leaving St. Louis, ‘You’re never going to win with Brett Hull on your team.’

"To go to Dallas and be the missing piece of the puzzle that’s going to help them win their Cup, and then to go out and score the goal in overtime – who hasn’t sat as a kid on the ice with his buddies and dreamt or pretended that’s the goal they’ve scored? To do it in real life was something special.”

It's been a few years, but its Halloween so I'm re-sharing. My bro @travcurrie carved this pumpkin depicting Brett Hull's (controversial) Stanley Cup winning goal in OT - 1999. Look closely at the pumpkin, was his foot in the crease? #GoStars #Sabres pic.twitter.com/cQHgPeVPK6

When he came to town in March with the Edmonton Oilers, then-Stars coach Ken Hitchcock didn't get into the controversy but provided some coachy insight to the victory. Sure, Hitchcock loved winning the Cup but he was still bummed 19 years later about the double-overtime loss in Game 6 of the 2000 final to New Jersey that kept the Stars from repeating.

"I know this might sound strange but I never looked at that game from the day we left here at 5 in the morning for almost 15 years," Hitchcock said. "I never watched it back. I watched the game we lost to New Jersey 20 times. I know every shift, everything that went on in that Jersey game. I never looked at this one until it came up in the summer on NHL Network."

Hitchcock took note that the visitors locker room his team celebrated in is long gone, taken over by the Sabres for their 2011 expansion project.

"I couldn't remember much about it other than we were in a nice locker room across the way and stayed and talked to each other until 5 in the morning and got on the flight," he said. "Our life as coaches is winning is relief and losing is just like living in hell. We celebrate for about five seconds and the rest of the time we live in misery."

The Sabres, of course, are left with a different kind of misery from one of the most sordid finishes any team has ever had to endure.

"It's something to remember but every game is different," Hasek said. "It was part of the history, part of the great memory. But once the game is over, you always have to look forward. That's the way I always approached hockey.

"It was my most exciting year of my career in the '90s. We had a talented team, hard workers, players who could score. We were close. But you never know in this game what can happen. I can still see when Brett Hull got the third shot and put it behind me. Disappointing. So disappointing."