Construction crews building new apartments on the site of the former Buffalo Forge Manufacturing Co. on Broadway have moved to the next phase of the $50.7 million project.

Workers have finished framing the four-story section of the project along Broadway and are installing the roof. The last foundations along Mortimer Street are being completed, said Stuart Alexander, founder of Stuart Alexander & Associates.

Rain delays had held up the project, particularly the roofing, but that won't be an issue once the complex is "closed in" by midsummer, Alexander said.

The initial "binder" for the parking areas is also in place, and the children's play equipment has been selected for the green-roof playground. The last elements of the environmental remediation of the site are also on schedule under the oversight of the state, with officials expecting to file their "certificate of completion" on time, Alexander said.

Stuart Alexander & Associates and developer Rhonda Ricks are transforming the site of the former Buffalo Forge plant at 490 Broadway into the Forge on Broadway, a mixed-income development with 158 affordable apartments in the two-building main complex.

As part of the project, Alexander said, the developers have hired a consultant to identify and collect memorabilia on Buffalo Forge for a future museum exhibit on the company's history, with tools, graphics, literature and mechanical equipment.

"Having watched east Buffalo implode from when I first returned to Buffalo in 1969 into the early 2000s, it is rewarding to be a part of the rebirth," Alexander said. 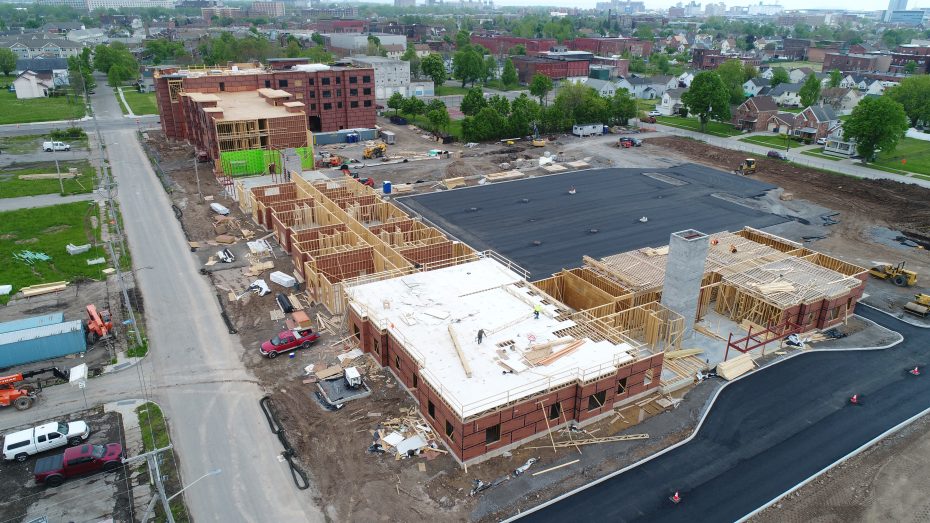 A view of the progress at the Forge on Broadway site. (Photo courtesy of Stuart Alexander & Associates)