A Buffalo firefighter and a New York City landscape architecture firm emerged as top winners Friday in a design competition for a linear park proposed along the former DL&W rail corridor.

The plan calls for an all-season 1.5-mile nature trail along the former elevated rail line between Canalside and RiverBend. Along the way, it’s expected to include nature and bike trails, art exhibits, parkland and other features with the idea of connecting neighborhoods to an eco-friendly urban land and water network.

Renkas said his college days — and yearning for the excitement of presenting a project — motivated him to submit an entry for the competition.

Instead, his design took first place in the community choice category, determined by a popular vote among those who attended any of three public exhibitions.

“His proposal captured the heart and soul of the project in a way that really resonated with the community," said Jajean Rose-Burney, deputy executive director of the Western New York Conservancy, which sponsored the design contest. "He clearly understands our city, the people that live here, and the importance of this project."

Renkas submitted a colorful poster that showed a pollinator garden path, elevated forest walk, sculptures paying homage to the area's Seneca Nation roots with other elements of the corridor’s history of steel production and railroading. 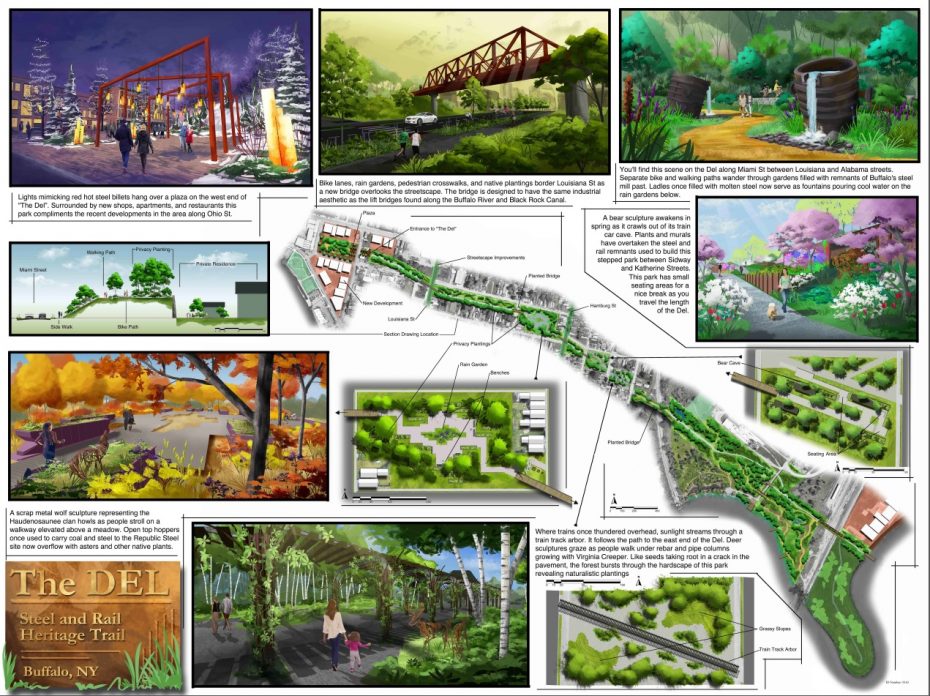 The firm's submission, “All Aboard! Reclaiming Hill & Del,” calls for a bicycle, pedestrian and recreational path in an environment of native trees, shrubs and wildflowers. Its concept gives a nod to the corridor's transition from rail to a "trail experience aided by bridges and lookouts providing Buffalo residents with the space to walk, run, bike, skate, ski, slide, play while connecting with each other and the surrounding nature."

"We really love Buffalo," said Molly Bourne, principal at MNLA. "There is so much opportunity here, and there's a lot to work with."

It's not the firm's first connection to the city. It has also done work at Canalside and in designs to return traffic to Main Street.

What's more, one of its senior associates, Greg Leonard, is from Elma.

"What's so exciting about a city like Buffalo when you're a landscape architect is not just the legacy of Olmsted but also the legacy of industry and the transportation corridors that are now getting re-purposed to create a new geography and ecology for the city," Leonard said. "It's really a new identity that's evolving and it's taking shape in all sorts to places all over the waterfront — Canalside, Outer Harbor, Solar City."

"What's exciting about this particular project is its about to bring these all together," Leonard added. 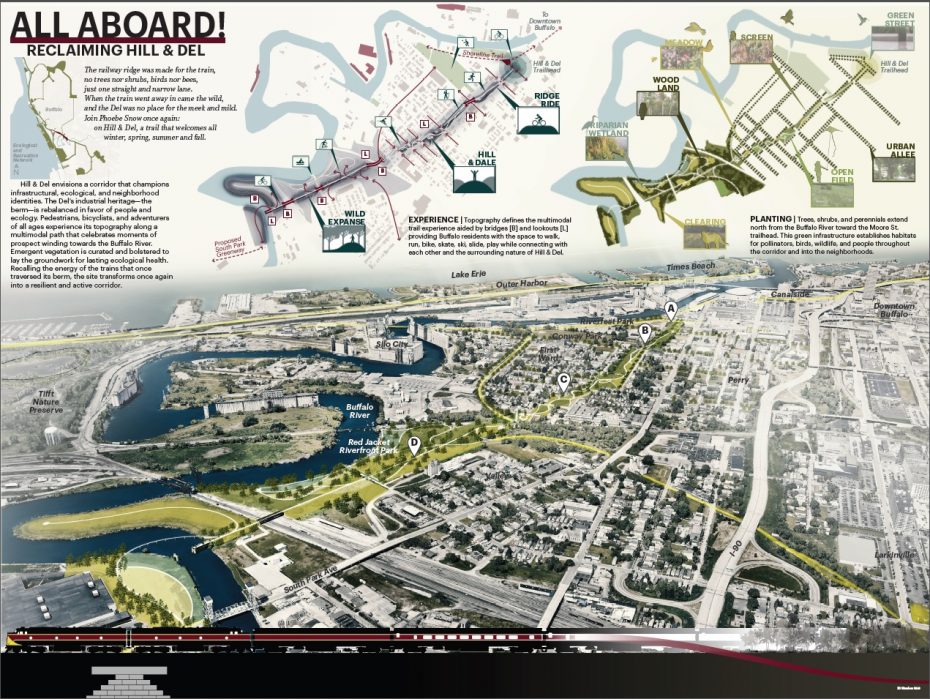 The jury — which included the Albright-Knox Art Gallery director and a former Toronto urban design and architecture director — visited the site and reviewed the submitted design concepts in March.

The land conservancy received some 98 design proposals, which led to Friday's announcement of three community choice awards and the jury's selections.

“These designs boldly capture the essence of this place as it is now and all that it could become,” said Nancy Smith, the land conservancy’s executive director. “They point the way forward for a corridor of connections — connecting our community with the Buffalo River, with nature and with emerging regional destinations.”

But the announcement of winners comes with a disclaimer: The winning designs won’t necessarily reflect what the finished linear park will look like.

It was an ideas competition. The concepts submitted by the winners and even those who lost may find their ways into the final project design.

That’s the next phase of the process, conservancy officials said.

Over the next year, the conservancy expects to use a $369,000 grant from the New York State Office of Parks, Recreation and Historic Preservation to craft the concept and schematic design. The conservancy said it still needs to raise about $200,000 by year’s end to continue the project’s next phase.

The next phase will last a year, beginning later in 2019, and will include many opportunities for community engagement, according to the conservancy.

To date, nearly $1 million has been raised, the land conservancy said.

The jury’s other awards included:

• Second Place: “The Dell, The Link & The Wander,” a joint effort by Marvel Architects and NOWHERE Office, both of New York City.
• Third Place: “Rail-n,” a design by six Beijing Forestry University students and “The Loop Line” by Brooklyn-based designer Kerry O’Connor.

"From each of the three neighborhoods through which this project will run — Perry, Old First Ward and Valley — we had tremendous support and tremendous enthusiasm," said Anthony Armstrong, the project manager.

The jury and those who voted for their favorites at the exhibitions did not know who submitted the entries. They saw only an entry number. The names of the project teams and information about them were not disclosed during the contest.

"This was a giant design inquiry into the future of the city and the future of this corridor and its neighborhoods," said Robert Shibley, dean of the University at Buffalo's School of Architecture and Planning and a competition juror. "That kind of inquiry makes me, as a designer and a planner, proud because it is the way of thinking that contributes substantially to the quality of life of the communities we serve."

The first of the jury’s honorable mentions — Del Buffalo — was also the community’s second choice.

It married the city’s rail and maritime histories in a concept it promoted as a place for “connecting” and “reconnecting.” The design incorporated a trailhead park overlook from a modified replica of a canal barge. It also included a perch overlooking the city’s rail yard, a meadow, community garden and a sledding hill along with play and picnic areas.

The community’s third-place selection was “The Del-Line.” The design, by Cannon Design and Supermass Studio of New York City, featured “parallel pathways” for bicyclists, cross-country skiers and snowshoers and another for pedestrians. There are parcels set aside for food trucks, community event spaces, gardens and outdoor classrooms.