ALBANY – Amid the nation’s worst outbreak of measles in a quarter century, lawmakers at the State Capitol Thursday approved a measure halting the practice of some parents using religious beliefs as a reason not to vaccinate their children.

After an at times contentious debate – with protesters shouting down from a balcony – the Assembly narrowly approved the measure, by a 77-53 vote, one more than required to pass a bill. [Hours later, after some lawmakers had seen how the voting played out, the official roll call vote was amended after nightfall: 84 for and 61 against.]

The demonstrators, many with small children in strollers, erupted in a storm.

The legislation comes as parts of New York City and Rockland County – mostly in ultra Orthodox Jewish communities – have become the epicenter of a measles outbreak over the past eight months or so.

The U.S. Centers for Disease Control and Prevention this week said 1,022 measles cases have been reported in 28 states, the most in 27 years and after measles was declared eradicated in 2000.

The New York vaccination bill by Hoylman – sponsored in the Assembly by Jeffrey Dinowitz, a Bronx Democrat – removes religious beliefs as an exemption that parents can use to keep their children from getting vaccinations in order to attend school or day care.

Parents currently can fill out a form and declare their religious opposition, leaving it in the hands of a school principal to decide if the request is valid – a position Hoylman said puts school officials in “an impossible position."

Vaccinations can be rejected only for a child’s health reasons.

Asked how the state might monitor that such health exemptions are properly given, Hoylman said medical professionals are already highly regulated in New York. “We can regulate the medical profession and make certain doctors aren’t selling exemptions to parents," the senator said.

Critics of the vaccination bill came to the Capitol to protest against its passage. Besides people who raise religious objections, there has been a vocal minority of opponents who are skeptics about the safety of vaccines.

The issue raised high emotions for dozens of parents who, with kids in tow, descended on the Capitol to monitor and try to halt the legislation's approval.

As the Assembly debate began, Julie O'Shea, a Nassau County mother of two children with religious exemptions, watched the proceedings from a balcony overlooking the chamber. 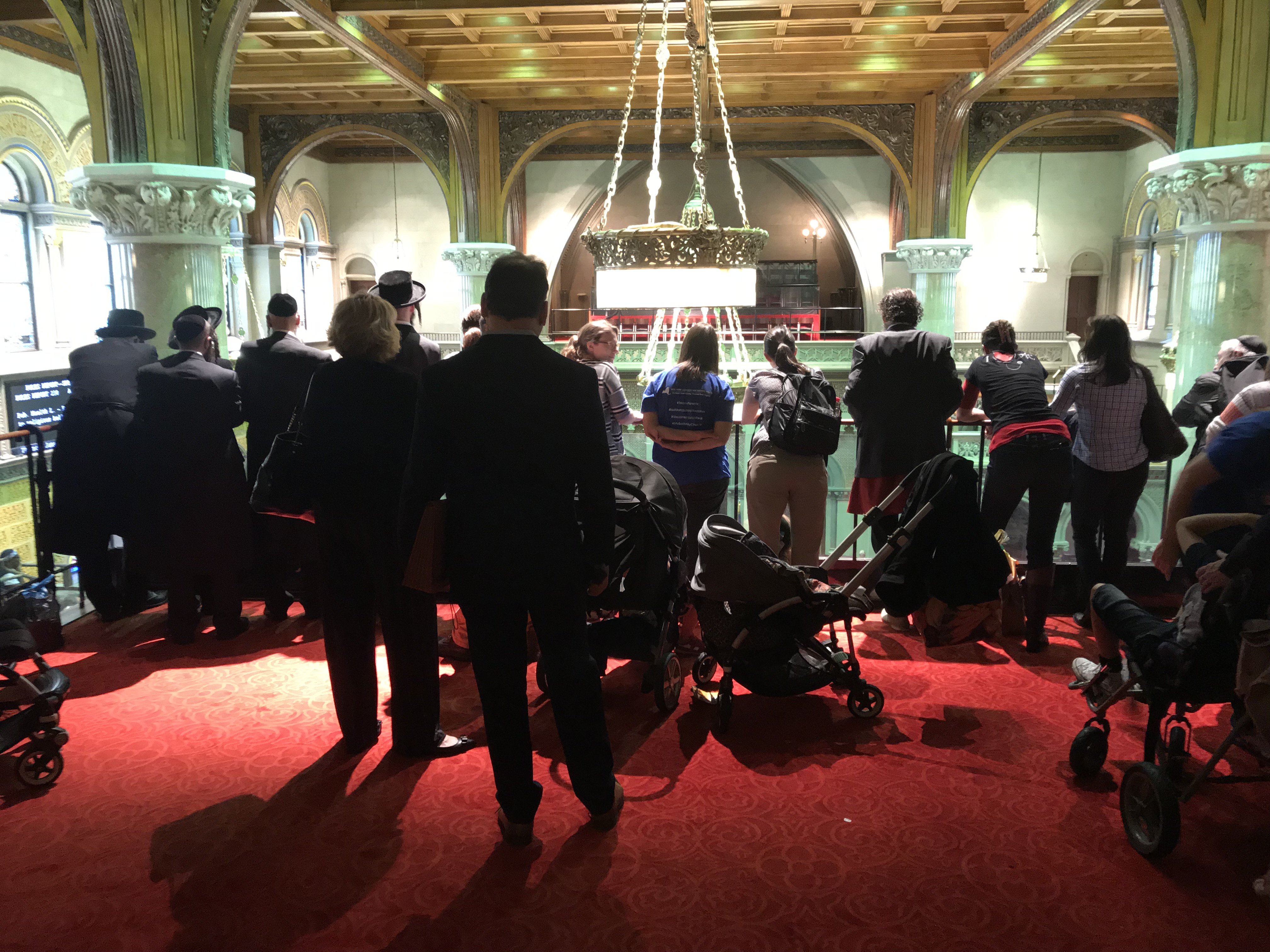 “I don’t think the state has any business telling us what to do with our children. It’s not a socialist country," she said. O’Shea and other critics of the bill said no one has died from the measles outbreak, which she said is being used as an excuse to limit religious beliefs.

“I think it’s not the place of the state to tell us what to do with our bodies. They’re pro-choice when it comes to killing babies, which I think is morally reprehensible. But why can’t we do what is right for our children who are not actually sick?" the woman said.

The measure narrowly passed the Assembly health committee – 14 to 12 – after one lawmaker reversed his no vote in order to allow the bill to go to the floor for debate.

Assemblyman Thomas Abinanti, a Westchester County Democrat, was one of the no votes in the health committee meeting and on the floor.

He said New York is going down a slippery slope based on a false pretense that people with religious exemptions were somehow responsible for the spike in measles this year.

Assemblyman Kenneth Zebrowski, a Democrat in Rockland County where nearly 300 measles cases have been seen in the past year, noted the passionate voices at the Capitol Thursday. "I know it's a difficult vote ... but we have to protect the public health," he said, warning that lawmakers needed to act now to help prevent a future epidemic spreading to other areas of the state.

Asked by one lawmaker about parents who decide not to get their children vaccinated for nonmedical reasons – preventing their children from attending schools in New York under the legislation – Dinowitz said: "Then you're the one who's choosing not to send your kid to school, not the people, not the state."

Assemblyman Angelo Morinelli, a Niagara Falls Republican, lamented days long ago when society was less regulated. "We have to stop legislating at the front door. ... We seem to want to regulate everything here," Morinelli said.

Assemblyman Robin Schimminger, a Kenmore Democrat and one of many veteran lawmakers voting no, said the bill "chips away and diminishes our protections of religious liberty in our state."

“It’s a public health crisis. I understand freedom of religion. We all do. We respect it. I’ve heard the anti-vaxxers theory, but I believe both are overwhelmed by the public health risk," Cuomo said Wednesday at the Capitol.

The Buffalo News earlier this year found that every school district in Erie and Niagara counties have granted religious exemptions to students to avoid getting vaccinated. In nearly all cases, the percentages of religious exemptions were far higher than health-related objections.

In the Holland and North Collins districts in the 2017-18 school year, nearly 3% of students did not get vaccinated for religious reasons.

Hoylman's office, citing state health department data, said 0.8% of students – about 24,000 children – in New York had religious exemptions in the 2017-18 school year. About 4,500 students had medical exemptions to avoid vaccinations.

Lost in the debate are children who can’t attend school because they have compromised immune systems and can’t be around students who are not vaccinated. “What about their rights to be in school or a day care center?" he said. Like California, he predicted, New York will see a sizable increase in vaccination rates with the passage of the new ban on religious exemptions.

A Siena College poll this week found that 84% of New Yorkers favor ending the religious exemption for vaccines.

Religious exemption for vaccines will be a legal question, Cuomo says