Jeff Toussaint worries about what will happen to his Medina farm if he is required to pay overtime to his workers once they have put in 40 hours per week.

"I think there's a lack of understanding, that agriculture just can't function like a factory," Toussaint said. He's concerned about the financial impact on his operations and whether his workers might leave if he limits their hours to keep costs in check.

Farmers around upstate are objecting to elements of state legislation called the Farmworker Fair Practices Labor Act. The bill would allow farmworkers to collectively bargain, pay them overtime after more than eight hours a day and 40 hours per week, guarantee them at least one day off per week, and give them the right to strike, among other provisions.

Proponents say the changes on behalf of farmworkers are long overdue.

"What we're talking about here is trying to provide the same rights and protections for farmworkers that every other class of worker in this state has," said Mario Cilento, president of the New York State AFL-CIO.

Advocates have pushed legislation promoting farmworkers' rights for years. But this year, the political landscape is different, with Democrats holding a majority in the State Senate.

Some area farmers say they favor two particular changes to the legislation: a higher threshold for overtime, and a no-strike clause.

Vegetable farmers, for instance, have to pick their pepper crop when the peppers are ripe, whether it takes eight hours or 12 hours a day, or else they could rot. Rain can also wreak havoc with farm workloads.

The farmers argue there's a need to balance the legislation's goals with the costs, pressures and demands of running a farm.

"We want to compromise," said Pat McCormick, of Robbie Hill Family Dairy in Java Center. "We realize we're not going to get everything we want."

McCormick said his farm's workers routinely put in 60 to 70 hours a week. If he had to pay them overtime starting at 40 hours per week, he said it would cost him an additional $50,000 a year, at a time when he said his farm is headed for a fifth consecutive year of financial losses.

The farm, which has 600 cows and grows corn and alfalfa, dates to 1854. McCormick runs it in partnership with his parents and brother.

McCormick said if he restricts workers' hours to 40 per week to avoid paying overtime, he fears they will leave. "They'll go to New Jersey, they'll go to Pennsylvania, they'll go to a different state where they can get 60 or 70 hours, because there's not many farms in the state that will be able to survive paying on 40 hours."

McCormick said his workers want the additional hours, to maximize their income.

"We offer them time off; they don't want it," he said. "They're here to make money for three or four years and then they'll go back home, to Mexico." 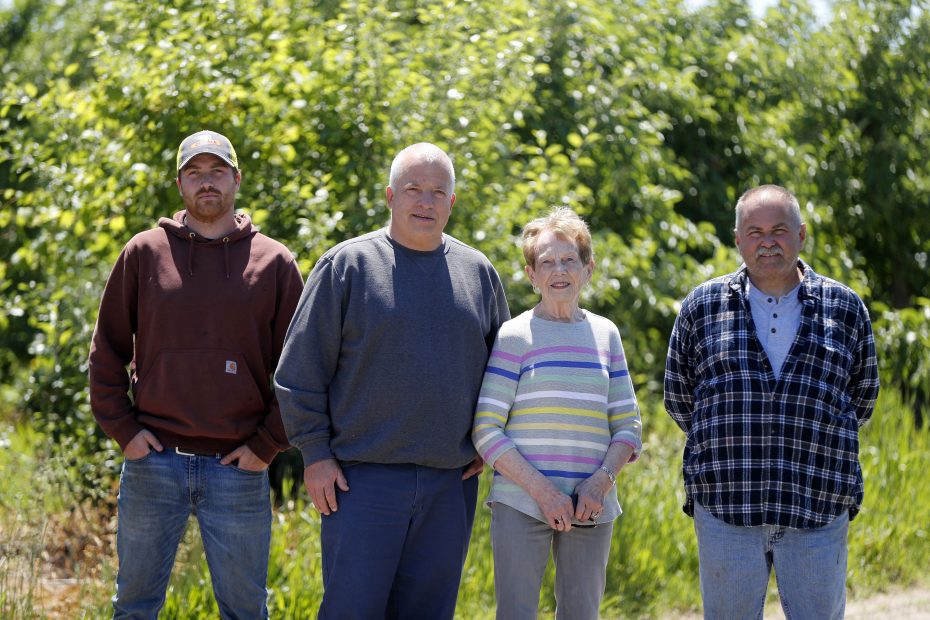 Nancy Gomez, a longtime employee of Toussaint Farms, said 40 hours of work per week would be insufficient for her. She plans to attend college in the fall, and is trying earn more money.

"I have two kids," said Gomez, who has worked on Toussaint's farm for about 10 years. "I have bills to pay, baby sitters." Gomez's parents, Maria and Emilio, have worked on the farm since the early 1990s.

Natasha Sutherland, one of the owners of Stein Farms in LeRoy, said nearly all of the workers on her farm are paid more than the state's minimum wage.

"People don't stay at minimum wage on dairy farms, on fruit farms," she said. Sutherland and other farmers say they face a combination of financial pressures from a rising minimum wage, a tough price climate for their products and, potentially, an overtime requirement starting at the 40-hour mark.

The Democratic Rural Conference of New York State, consisting of Democratic members of the State Senate and Assembly from many rural areas, has raised objections to the legislation in its current form. The conference issued a statement calling for overtime for farmworkers to start at 60 hours, taking into account "the realities of farming with unpredictable weather and harvest requirements."

Cilento, the New York State AFL-CIO president, challenged the idea that workers should routinely put in an additional 20 hours of work per week before collecting overtime.

"I defy anyone to even be able to withstand that, and that's what they're trying to deny these workers," he said.

Farmers who spoke to The News also said a no-strike clause was important to them. They said a strike would wreak havoc on farm operations requiring constant attention, from milking cows to harvesting crops ready for picking.

Both sides of the debate expect action on the legislation before the end of the session.

Cilento said farmworkers in New York State are "fighting to be treated just as everyone else."

"Right now, we treat them as second-class citizens and we should be ashamed of ourselves, as New Yorkers and as human beings, that we would treat any class of worker or any other human being as such," he said.

An hour in Albany: Amid much noise, dealmaking looms in Capitol