As a 3-year-old idolizing his 8-year-old brother, Cal, O'Reilly had practiced this in the family kitchen of their home outside London, Ont. Take the Stanley Cup and hold it over your head. Use whatever you could. A garbage can, milk jug, whatever.

Hold it as high as you could. And O'Reilly did just that Wednesday night in TD Garden. Now 28, he was a champion just over 11 months after the Sabres kicked him to the curb because Jason Botterill went all rookie general manager on his team in the aftermath of a 62-point season by flushing what he felt was a part of a negative locker room culture.

"I was trying so hard not to smile and show emotion on the bench," O'Reilly said after the Blues' 4-1 win over the Boston Bruins in Game 7 wrapped up the franchise's 52-year Cup quest. "You try to keep it cool and keep playing and finish the game. As a kid, that feeling comes back to you what it means to win this thing. I still can't believe it. I can't believe I'm here as a Stanley Cup champion with this group of guys."

The giving continued. Families came on the ice. O'Reilly and his wife, Dayna, shared a pair of long embraces. Other friends grabbed him. Then came his parents, Bonnie and Brian, and Cal, whom he played with parts of two years with the Sabres.

The hugs were long. Brian O'Reilly kept screaming, "We did it." Ryan barely kept his composure when talking about them afterward.

"It was really emotional," Ryan O'Reilly said. "The hours and money they put in, I wouldn't be here. I wouldn't be in the NHL having this as a job if it wasn't for them and all the stuff they've done. It was very emotional. I couldn't stop thanking them for putting their lives aside for us, for the kids. And doing whatever I needed to take us to practices, training things. I can't thank them enough."

"It was a we-did-it hug," Brian O'Reilly said. "We’ve been working together for years and the resilience of this kid to just keep working on his weaknesses and get better and get better and find himself in it. He deserves this. He’s put in the miles. His confidence comes from his hard work and that is something that when you have that kind of confidence with the hard work you can share it. That hug was all about, ‘Dad, we did this. We did it.’ ”

ROR with family and brother Cal on the ice. #StanleyCup #StlBlues pic.twitter.com/5yZiH0aQtB

Ryan O'Reilly sure did the entire postseason – even playing with a cracked rib that Dad revealed happened in the second round against Dallas. O'Reilly led all players in the series with five goals and nine points, and his 23 points in the playoffs set a St. Louis franchise record.

He scored the game's first goal on the tip-in of a Jay Bouwmeester shot with 3:17 left in the first period and it changed the momentum of a period that was being dominated by the Bruins. Alex Pietrangelo's backhand from in tight with 7.9 seconds left made  it 2-0 and had Boston on its heels the rest of the night, especially since Blues goalie Jordan Binnington deftly stopped 32 of 33 shots.

Game 7 was the 108th of the season for O'Reilly, tying him with nine other players for the most in NHL history when you combine the regular season and postseason.

"He was just a relentless hockey player for a long time," said Blues coach Craig Berube. "Never quits and such a smart two-way player. He's special."

O'Reilly said he was overwhelmed at the thought of winning the Conn Smythe.

"Looking at the names on this thing, to be part of that group, most of these guys on here I pretended I was as a kid," O'Reilly said, looking at the trophy on the interview room dais with him. "Now to be with them it's an incredible feeling. I have so many people to thank. I'm so proud of this group and myself too. I can't believe we hung on and got this done." 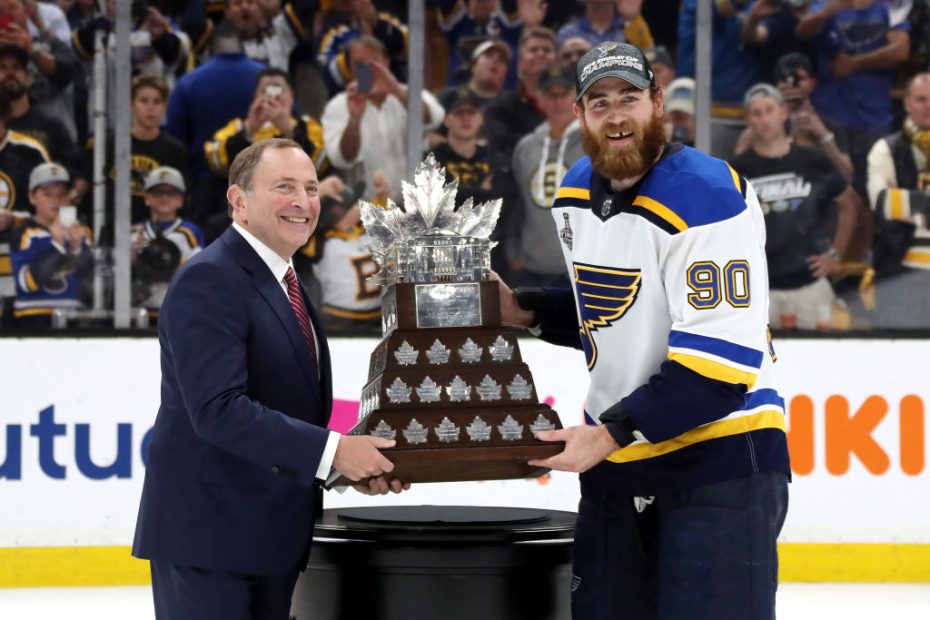 O'Reilly's heroics helped end a drought that stretched to the birth of the Blues in 1967. It leaves the Sabres and Vancouver Canucks – both born in the 1970-71 season – as the teams with the longest Cup droughts among franchises that have never won one.

The Sabres constant parade of bad trades and bad drafts has contributed to this feeling of hopelessness among the fan base of the team sporting the NHL's longest playoff drought. Botterill has drafted well but has brought in too many lousy NHL players, already fired a coach and just became the first GM in history to trade away a player who won the Smythe the next season.

ROR recounts his first chat with GM Doug Armstrong about winning a Cup and says about the finish: “It was there that we could do it bit gosh, it’s exhausting. I’m exhausted.” #StlBlues #StanleyCup pic.twitter.com/VmJPZ56j6Q

In Botterill's defense, remember, is the fact that the trade's ultimate verdict can't yet be written. The GM can't be blamed for perennial 20-goal scorer Patrik Berglund quitting on his team 10 days before Christmas. Perhaps Tage Thompson becomes a 30-goal scorer some day. Perhaps the 31st pick in the draft, now officially Buffalo's in the wake of the St. Louis victory, becomes a strong player in the future or is used to acquire NHL talent right now.

And Botterill will point out that there's probably no eight-year, $72-million contract for Jeff Skinner if O'Reilly is still on the roster. Fair enough. Of course, Skinner leads all active NHLers in games played without ever appearing in a single playoff game. Right now at least, advantage to O'Reilly.

Blues GM Doug Armstrong was clearly doing a bedraggled fellow GM a solid after the game when he said straight-faced: "I think it's a good deal for Buffalo too. They got a great player in Tage Thompson. They got a first-round pick. It's going to work out well for them and Ryan's worked out perfect for us."

When I saw O'Reilly in Chicago in November a week before the firing of Mike Yeo, he didn't have a lot of answers. The Sabres were flying without him and his new team was struggling. He leaned on his parents during those dark times, getting reassurances that he wasn't the one causing his teams' troubles. Eventually things turned around for the Blues.

"There was a picture of him in Colorado when they lost and he just takes it all on. It’s the same thing in Buffalo," Brian O'Reilly said. "If the team loses, he takes it personally. I always say this: Give me a group of athletes that completely hates losing. I’d rather have those athletes than athletes that expect they’re going to win because they’re more talented."

"It was crazy how quick things happen," Ryan O'Reilly said. "I get traded. I'm talking to Doug. I'm familiar with a bunch of guys on the team. Looking at the roster, I was so amped up. I said, 'Let's go win a Cup.' For that to come true ... It was there that we could do it but gosh it's exhausting. I'm exhausted."

Sabres fans seem exhausted about the reviews on the O'Reilly trade but the indisputable fact is that it currently rates as one of the worst deals in NHL history. It puts huge pressure on Thompson, on whichever player is taken No. 31 next week in Vancouver (or acquired in a trade for that pick). And it is currently job-defining in a very negative way for Botterill.

O'Reilly never wanted to be traded when he said he had lost his passion for the game. He told TSN that last year at the World Championships, saying he was looking forward to playing with Rasmus Dahlin. His father reiterated the point on the Garden ice Wednesday night.

"His comment about being complacent with losing and we have a culture where we're not doing the hard work was what he believed," Brian O'Reilly said. "We've always told our kids if you want to find the truth, you've got to remove and point out what's false. And he pointed out the falsehood. There are false things and he called them out.

"He had no intention of leaving. He wanted to stay there and build it. But once something leaves your mouth, people pick up anything they want from it and make it into anything they want. I guess that's what happened. We love Buffalo. I have the greatest respect for Terry (owner Terry Pegula). They treated him so well. I love the city. It was so nice to drive three hours and go to games. We were happy there. But they decided to move on."

The O'Reillys are more than happy that decision was made.