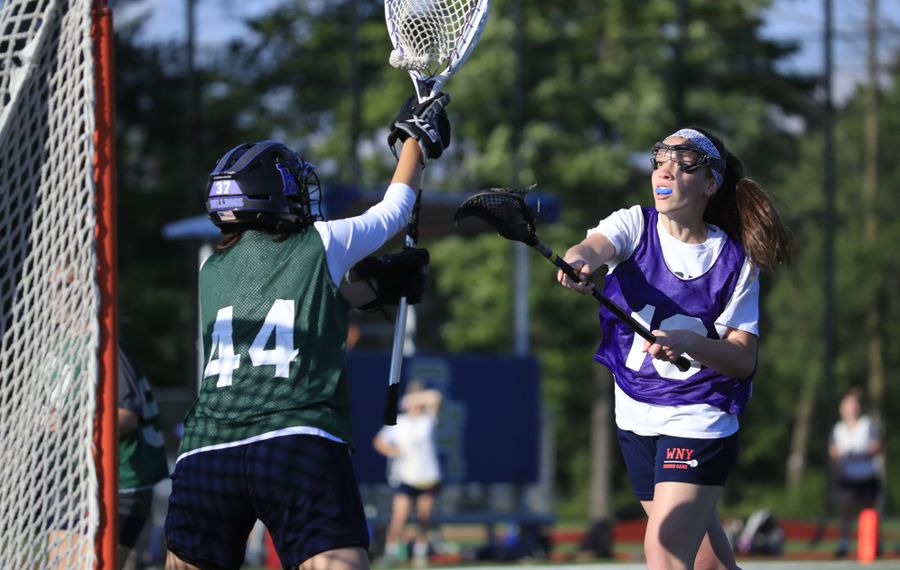 Sean Hayes (Bishop Timon-St. Jude) scored the go-ahead run on the front end of a double steal in the top of the ninth and Jacob Belote (Williamsville North) followed with an RBI single for the Chuck Senn Sr. All-Stars in a 13-11 win over the Chuck Senn Jr. Stars in the first annual WNY High School Baseball Senior All-Star Game Tuesday at Orchard Park.

The teams were named in honor of the long-time Cattaraugus-Little Valley baseball coach and his son.

Vinny Stutz (Lancaster) had a three-run triple and Alex Rodriguez (Lackawanna) had a triple and a two-run single for the winners.

Mike Hartman (St. Francis) pitched a scoreless eighth inning for Senn Sr. to pick up the win. Jordan Prince (Orchard Park) pitched the ninth to get the save.
Ian Evans (Wilson) and Aiden Bova (Kenmore West) each pitched a perfect inning for the winners.

More than 50 senior high school stars played in the game and each side used nine pitchers, one per inning.

The Senn Sr. Stars scored five times in the third for a 6-5 lead. The Senn Jr. team then scored five in the bottom of the sixth to move ahead, 11-10. Griffin Smith (Holland) singled home Hayes for Senn Sr. to tie it at 11-11 in the top of the seventh.

Eveline Butlak, senior softball pitcher at Lake Shore, has signed with Genesee Community College, where she intends to pursue a degree in substance abuse counseling. Butlak helped Lake Shore to a second-place finish in ECIC III this season.

Joseph Colson of Niagara Falls, a senior at Amherst Christian Academy, received the 31st annual $1,000 scholarship presented by the Bowling Proprietors Association of Western New York at the organization’s 65th annual Championship Awards dinner at Salvatore’s Italian Gardens.
Colson, who bowls in a youth league at Classic Lanes, is president of the student body at Amherst Christian, carries a grade average of 98 and is an active volunteer in community causes. He is headed for Niagara County Community College, then hopes to go on to the University at Buffalo and study mathematics.
There was a record 233 at the banquet honoring youth bowlers from bantams to senior boys and girls who participated in the BPAWNY’s four tournaments. The organization also presented $250 scholarships to four Tournament of Champions winners - Mattingly Selk (Broadway Sports Center), Paige Bartosz (Broadway), Kobie Wiewiorski (Manor Lanes II) and Thomas Klenke (Pepsi Travel League).