Ambitious restaurant owners have long focused on increasing their business’ popularity by improving what’s on their plates.

Lately, an increasing number is looking at another issue: the plates themselves.

The takeout ones, at least. Years ago, the doggie bag became a plastic clamshell, and restaurants expanded their to-go offerings. Millions of plastic containers – and all the attendant Styrofoam cups, straws, utensils and packaging – go out the doors each year in Western New York.

As plastics stuff landfills, dot landscapes and form trash archipelagos in our oceans, more local places have been investing in alternatives made from trees, corn, bamboo and sugar cane, among other biodegradable and recyclable alternatives.

The change can be expensive, but restaurant owners say they have more than money on their minds. Slowing down the trashing of the planet, and appealing to customers’ environmental concerns are often factors. Some restaurants are even finding the switch seems to be paying off, in increased sales. 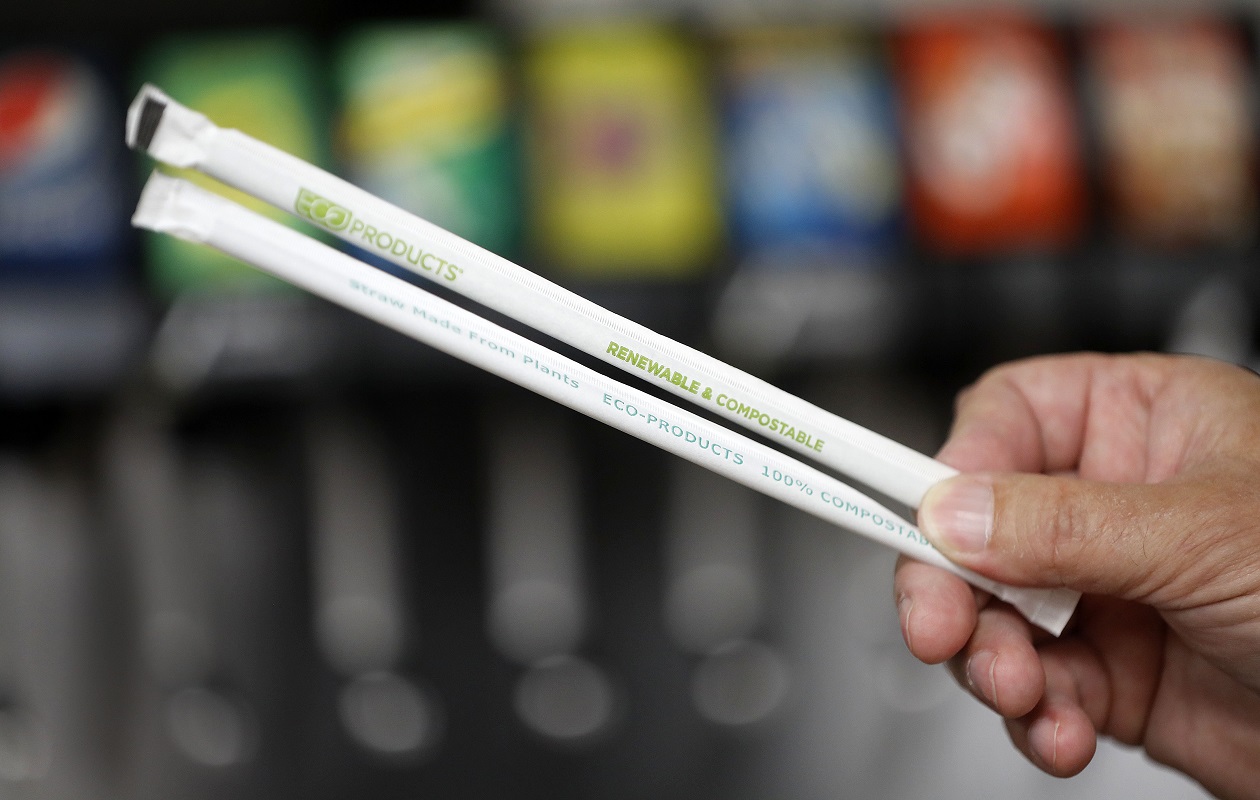 In Hamburg, Bob Brunner has been running neighborhood tavern J.P. Fitzgerald’s as a successful business for 29 years. Two years ago, he decided it made sense to start spending more than he had to on one perennial expense: disposable wares.

“The young people are caring a lot more about the environment, and there’s been a big push to do recycling,” Brunner said. “We’ve been doing recycling for years – we’ve always separated our glass, our cans, our cardboard in our garbage. But all our to-go products were always in Styrofoam.”

A company called Eco-Products got his attention at a Chicago food convention, and Brunner put in his first order. The dishes, lids, straws, bags and utensils were made from sugar cane fiber, sweet potatoes and recycled compostable plastic, certified biodegradable. The bill came to $15,000, about four times what he usually paid.

“On a sandwich you might only have a $2 margin, and if the container’s $1.50, you’re only making 50 cents,” he estimated. “But I don’t look at it that way. You have to do volume, and it’s also marketing, and doing the right thing for us, and the consumer.” 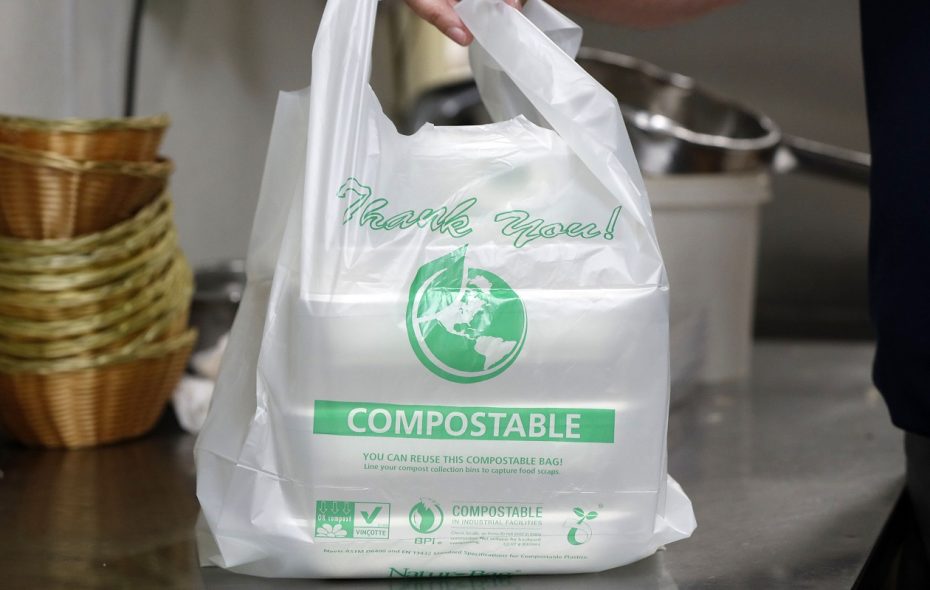 Prish Moran has been ahead of the curve since opening Sweet_ness 7, her neighborhood restaurant on Buffalo's Grant Street in 2008.

Disposable wares that don’t last forever have been part of an ecology-friendly, waste-reduction approach that includes composting food waste. Farmer Pirates, an urban farming collective that collects compostable waste from local restaurants, used to fill that role, but now Sweet_ness 7's vegetable waste goes to a nearby urban farm, and coffee grounds are available to whoever wants to enrich their soil. 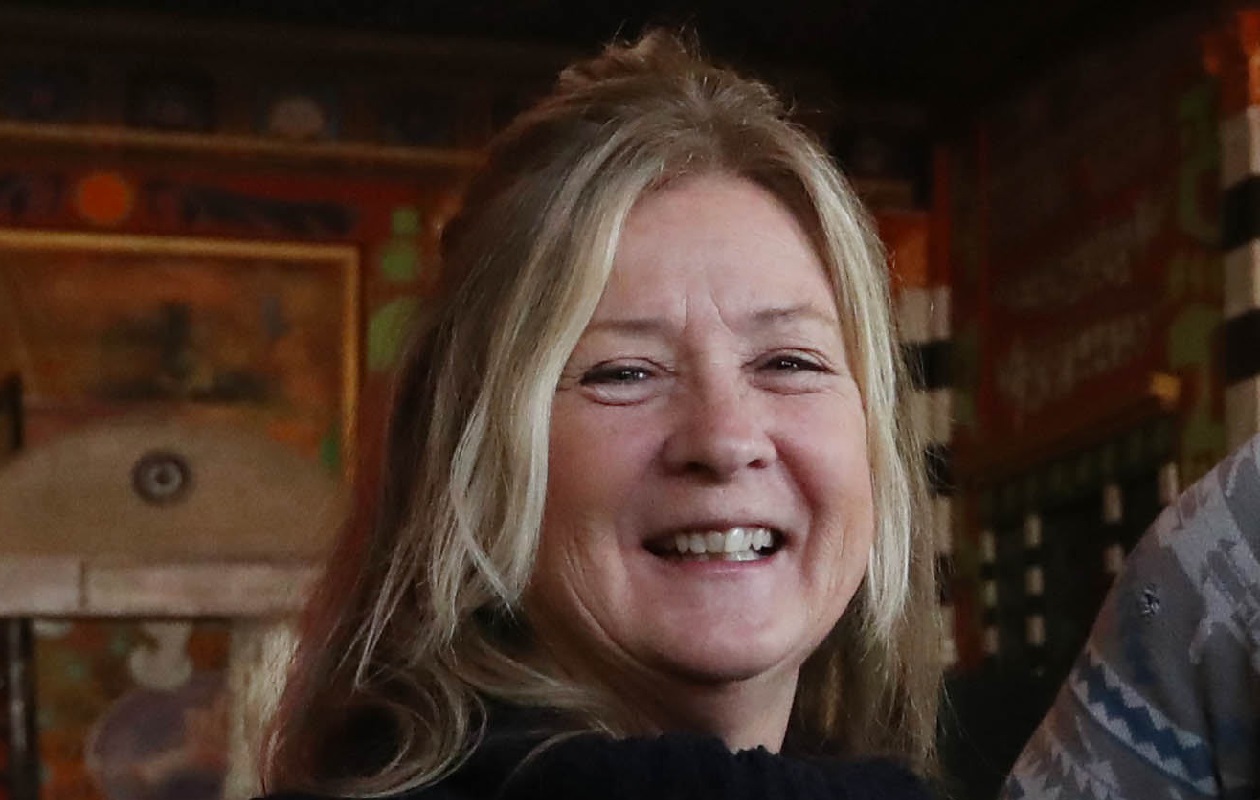 “I’m a bit fanatical about it,” Moran said of her ecological standards. “We’ve done no straws for years. The straws we do have are paper. I hate them.”

If you bring your open cup, it’s 50 cents off coffee. The takeaway eating utensil is a bamboo spork, and takeaway containers are recyclable or compostable sweet potato or sugar cane.

It’s part of what draws customers to her place, Moran said. “The bottom line is that you attract a clientele that is as big a believer as you are.”

Between Lloyd Taco Factories on Hertel Avenue in Buffalo and Main Street in Williamsville, and its fleet of five food trucks, Lloyd produces tons of trash.

“Being in the taco business, there is a responsibility to be a steward of the earth,” said Pete Cimino, who owns the company with Chris Dorsaneo. “Everything – from the proteins you purchase, the cabbage you purchase, the boxes things get delivered in – all has some sort of impact.”

For the most part, Cimino said Lloyd is doing well, including a robust kitchen and drinking room recycling program. The company sells about 75,000 orders of nachos a year, each in a recyclable paper box.

But it could do better on forks, Cimino allows. “We’re not using a biodegradable one because of the cost,” he said, about four times as much.

It’s under discussion, though. In the meantime, drinkers aren’t offered straws, and if they ask, they get one made from sugar cane. Used kitchen oil goes to Buffalo Biodiesel.

But “you have to be practical,” Cimino said. Would customers go along with it “if we have to increase prices to do it?”

Next door to Lloyd's Williamsville location, Fresh Catch Poke has offered customers containers and utensils that are 100% biodegradable from the day it opened, owner Michael Tobin said. The packaging is "corn-based, no petroleum," he said, and kitchen scraps have gone to Always Something Farm in Darien.

"The industry's margins are so thin from rising wages and food costs, add in this movement and some places may be operating on less than 5% margin," Tobin said. "I haven’t met one operator who doesn’t want to make a change, it’s just a matter of costs."

Some operators have considered a packaging charge to cover the cost, partly to educate customers about the financial impact on restaurants.

Not J.P. Fitzgerald’s Brunner. “If I go some place and somebody puts a charge, whether it’s because of minimum wage increase, or a charge for to-go packages, whether 25 cents or $1, I’m offended, and I’m not going back,” he said. “It doesn’t need to be taken out on the consumer.”

At J.P. Fitzgerald’s, the response has been “unbelievable,” Brunner said. “People call me over in the restaurant and tell me how happy they are we’ve taken the lead with this. And our to-go business has gone up – we’re doing more volume in to-gos than we were before. No doubt about it.” 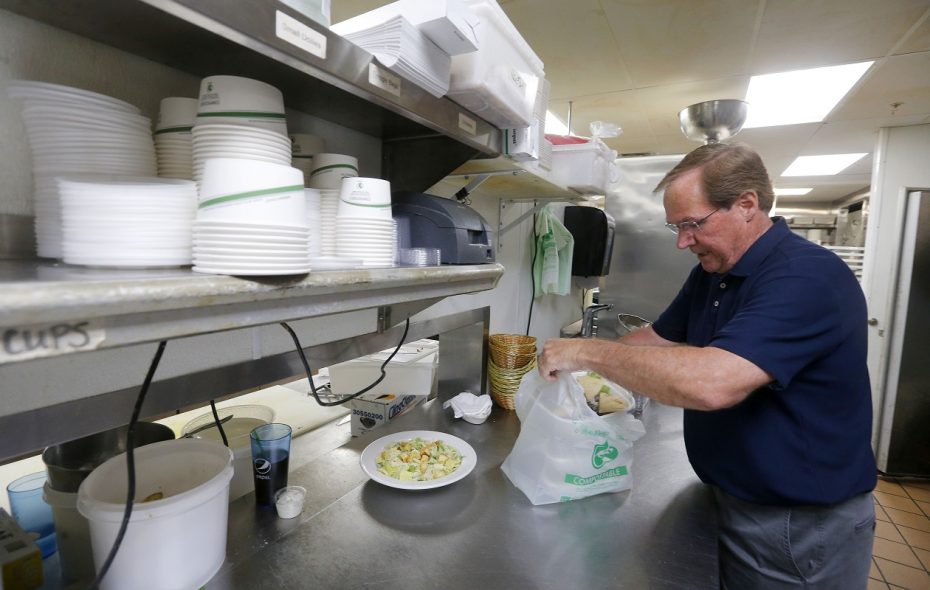 “The young people are caring a lot more about the environment, and there’s been a big push to do recycling,” Bob Brunner of J.P. Fitzgerald's said. (Mark Mulville/Buffalo News)

There’s more to it than money, though, he said.

“We need to make the right decision,” Brunner said. “We need to be aware of the plastics that are being thrown out windows, left on beaches, in fields and backyards. If we can get products in here so that when people are lazy and they just throw it out, they don’t care, we know it’s going to break down.”

“That’s helping the consumer,” Brunner said. “We’re doing the work for them.”

Brunner said he hopes other restaurateurs take steps towards biodegradable packaging. As more businesses start buying, the prices of what are now considered specialty items should drop, he said.