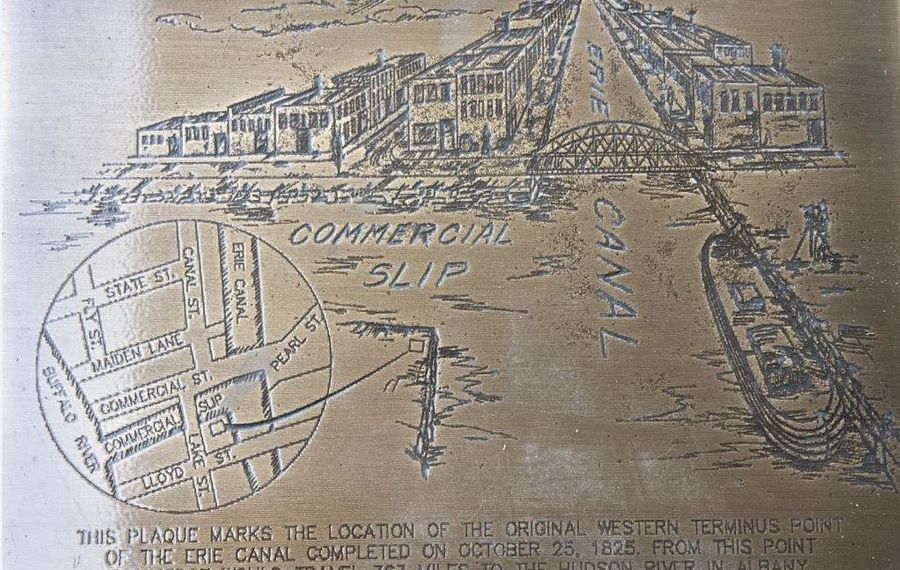 A land survey marker at Canalside now commemorates the original western terminus of the Erie Canal.

Officials from the Niagara Frontier Land Surveyors Association and the Erie Canal Harbor Development Corp. dedicated the plaque at a ceremony Wednesday.

The roughly 12-inch-by-10-inch plaque shows an image of the setting at the time the canal opened.

It reads: "This plaque marks the location of the original western terminus point of the Erie Canal completed on October 25, 1825. From this point commerce would travel 363 miles to the Hudson River in Albany, connecting Buffalo to New York City and the world. Dedicated June 2019."

A surveyor monument, usually a small ground-mounted marker, is used in land surveying to record key survey points on the Earth's surface.

The plaque was installed by the replica canals next to the Explore & More Ralph C. Wilson Jr. Children’s Museum.

"Our role as professional land surveyors is to retrace steps from our predecessors," Brian Skalman, NFLSA regional secretary and former president, said in a release. "Those involved in this dedication all have contributed in some effort to retracement of portions of the Erie Canal."