This is part of a series of profiles on players who might be available for the Buffalo Sabres with the seventh overall pick in the NHL Draft on June 21.

“He’s a fierce competitor,” said Cavallini, Turcotte’s former youth hockey coach in Chicago. “It’s one of those qualities, you either have it or you don’t. He wants to possess the puck. He’s been gone two years now from our program, but he was one of those kids, if he got the puck stripped from him, he was getting it back. There was no quitting in him.”

Cavallini knows a few things about players who possess a competitive fire. He was a left wing for 13 years in the NHL, and is now the director of hockey with the Chicago Mission youth hockey program. He also knows a thing or two about Turcotte, who played the 2016-17 season with the Mission.

Turcotte doesn’t hesitate to describe himself as an NHL prospect, either.

“I’m a really competitive hockey player and a person, and that’s why I play a 200-foot game,” Turcotte said at the NHL scouting combine. “I’m someone who’s really great offensively, and someone who can be relied on in the defensive zone, and can just be a really good hockey player.”

The 5-foot-11, 180-pound Turcotte isn’t bragging about himself, either. He is projected as a top-10 pick in this year’s NHL draft, which begins June 21 in Vancouver. NHL.com’s June 3 mock draft has Turcotte going No. 3 to his hometown team, the Chicago Blackhawks, or at No. 4 to the Colorado Avalanche.

But there’s also a chance that he could go to the Sabres, who pick at No. 7 in the first round of the draft. 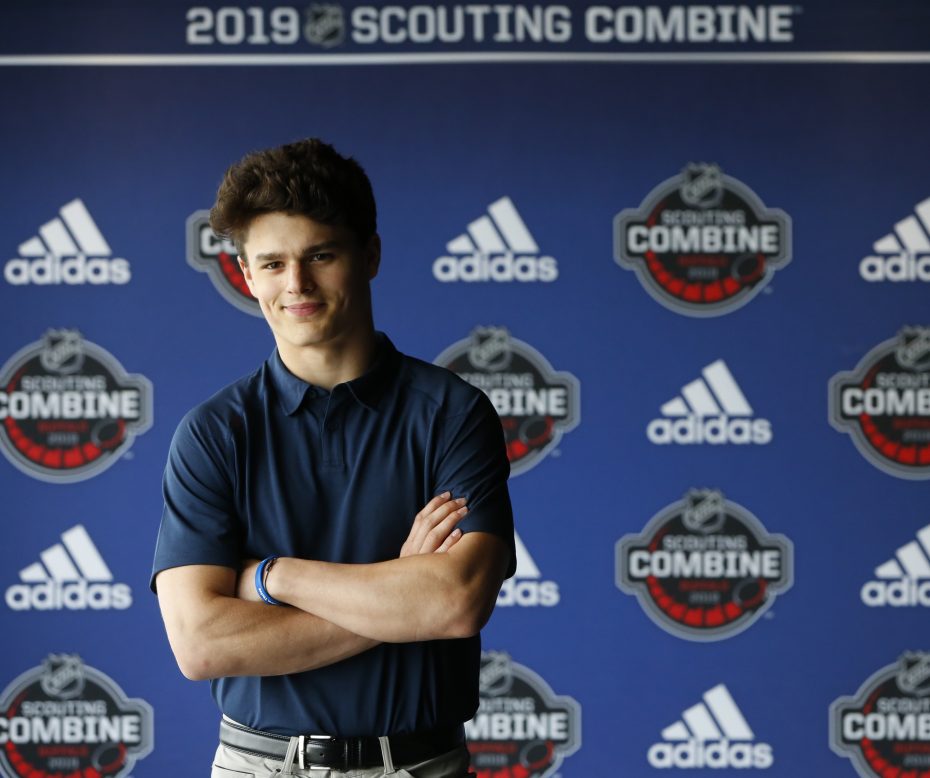 The Sabres have a need at center both short term and long term, and Turcotte is part of a draft class that’s already center-heavy. Other top centers include likely first-round picks Jack Hughes, Kirby Dach, Dylan Cozens, Trevor Zegras, and Peyton Krebs.

Turcotte scored 27 goals and had 35 assists with the U.S. National Team Development Program's Under-18 team despite playing only 37  of 64 games; he missed parts of the season because of mononucleosis and a hip injury.

“He has an ability to read the play, go out there, make the right decisions and execute the plays,” NHL Central Scouting director Dan Marr said of Turcotte at the combine. “He just has a real good understanding of the game, but everything about him, with his speed, his skill set there, there’s a little bit of deceptiveness there, and that’s hard to defend against.”

The Montreal Canadiens selected Turcotte’s father, Alfie, in the first round of the 1983 NHL Draft. Alfie Turcotte played from 1983 to 1991 in the NHL and the American Hockey League. He told the Chicago Tribune last month that he anticipates Alex to be selected between No. 3 and No. 7 in this year’s draft, and that he doesn’t expect him to go any lower than seventh. 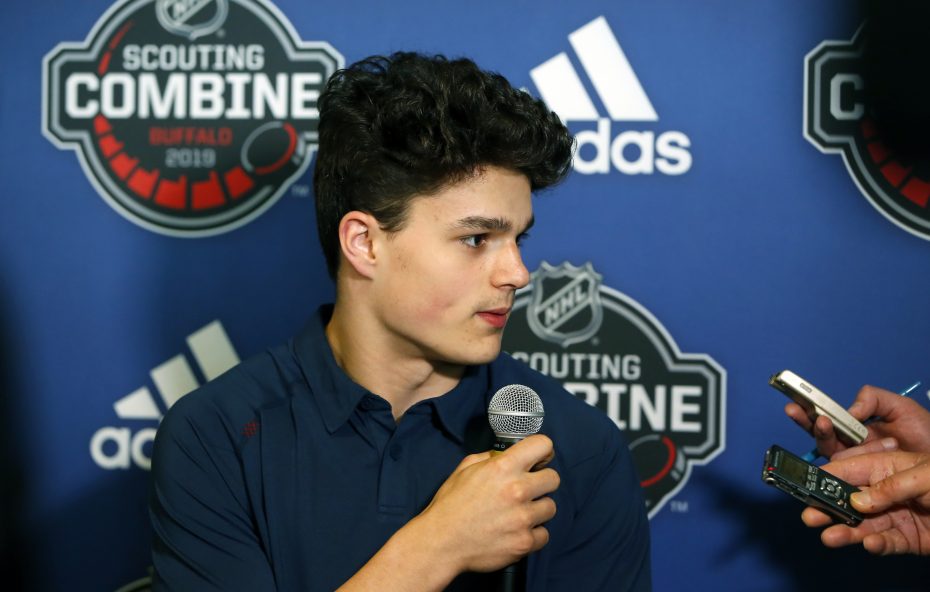 NHL prospect Alex Turcotte speaks with the media during the 2019 NHL Scouting Combine at Harborcenter on May 31, 2019. (Harry Scull Jr./Buffalo News)

“Not being on the best team sometimes, I had to show up, play my game and be at my best, at all times,” he said. “I didn’t have anyone holding my hand, and it taught me how to be competitive and be consistent.”

Hughes, who played in the U.S. National Team Development Program with Turcotte, recognized quickly what distinguishes Turcotte as an NHL prospect.

“The way he plays, how skilled he plays and how hard he plays. I like to compare him to (Colorado’s Nathan) MacKinnon a little bit," Hughes said. "MacKinnon, obviously, is a top-three player in the league but the way that Alex plays, he plays with a little skill and hardness, at the same time. That’s unbelievable. Anyone you ask here will say how competitive a kid he is, and how he prides himself on his hard work.”

In addition to his competitive level, Cavallini also said the work ethic Turcotte possessed stood out, even as a 15-year-old.

“There’s no shortcuts in this,” Cavallini said. “You can’t show up for a workout and sit around chatting. He’s the kind of player who understood, if you’re not putting in the work, you’re not going to get there.

“Talent takes you only so far, so you have to put the time in. When players like that work as hard as they do, it rubs off on the whole team. There’s no cheating, there’s no shortcuts. You take a shift off, bad things happen. And it’s so magnified now, and Alex understands that.”