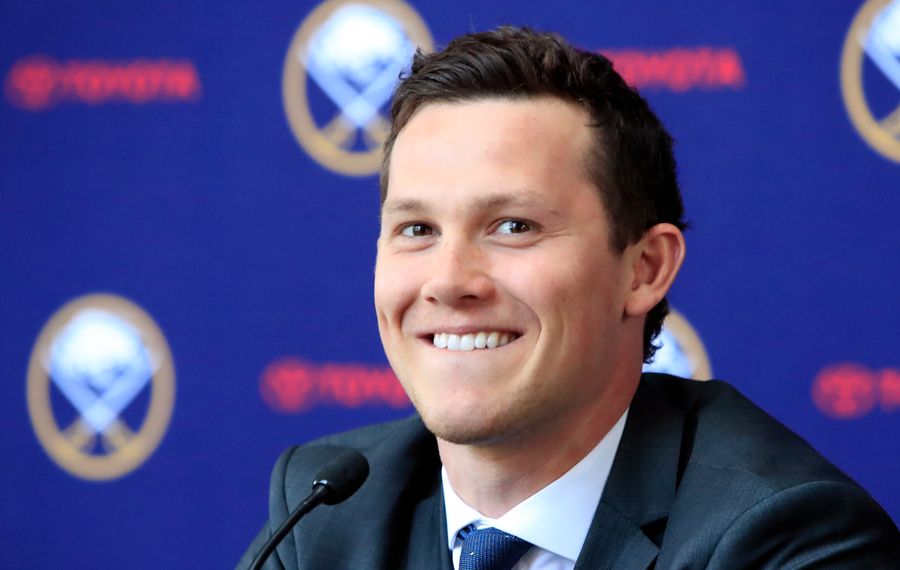 Jeff Skinner paused and smiled when he heard the applause, stepped away from the press conference table and walked to the back of the KeyBank Center atrium to greet three Buffalo Sabres fans who were leaving the nearby team shop Tuesday afternoon.

Skinner, the recent recipient of the second-largest contract in franchise history, chatted with the group and posed for a few pictures. The fans had just listened to a portion of a 13-minute press conference in which Skinner detailed why he chose to return to Buffalo, beginning with his positive experiences on and off the ice.

Skinner, a 27-year-old winger, is suddenly one of the franchise's pillars after the Sabres signed him to an eight-year, $72 million contract late Friday night, and, as he recalled Tuesday, there was never any doubt where he wanted to continue his career.

"For me, I love it here," Skinner said when asked about not reaching unrestricted free agency July 1. "I had a great time. Last year, obviously disappointing with the result but when you’re sort of looking at the overall picture, I had a great time and a great experience with everything, my teammates, the fans, the community, everyone in the organization. Obviously we just didn’t feel the need to get to that point because I like it here and I didn’t feel like it needed to get to that point where I wanted to look elsewhere."

Aside from the contract, there was not one particular ah-ha moment that swayed Skinner to return. He didn't even begin to seriously contemplate his future until the questions from reporters became frequent during the latter portion of the season.

Upon arriving in a trade from Carolina in August, Skinner gradually evaluated the City of Buffalo and his new team. He grew up only 67 miles away in Markham, Ont., which allowed his family to watch him play in-person more often. Skinner also joined a roster that had several young, promising players, including Jack Eichel, Sam Reinhart, Rasmus Dahlin and Casey Mittelstadt.

Skinner and Eichel formed instant chemistry when the two were united on a line and sparked a 10-game winning streak that sent the Sabres to the top of the NHL standings. Yet, the team's 16-33-8 record following the streak was the worst in the league and continued Skinner's run as the NHL's active leader in games played (661) without a playoff appearance.

Though General Manager Jason Botterill likely will make a number of roster changes this offseason, the 10-game win streak and progress made by young players such as Eichel made a lasting impression on Skinner as his agency, Newport Sports, continued contract negotiations.

"There’s some talented players that are pretty young and they’re going to get better," Skinner said. "As they grow older, they’re going to mature and keep taking next steps. I think when you look at the start we had, I know that we sort of ran through a speed bump there and didn’t finish off the way we [wanted], but I don’t think that sort of takes away from the part of the season when we did go on a bit of a run and we had a fair bit of success."

Despite Skinner's desire to stay in Buffalo, he would not decide on his future until the Sabres hired Phil Housley's replacement. When Ralph Krueger was named coach May 15, Skinner received a number of "extremely positive" text messages from players who had either firsthand experience, or secondhand accounts, about Krueger's coaching ability.

Skinner and Krueger then had a phone conversation, the tone of which led the latter to proceed on the basis the team's leading goal scorer would be on the roster in 2019-20. The conversation also showed Skinner the sort of qualities that aren't evident on a coach's resume.

"He’s excited to be here, he’s hungry and obviously his resume speaks for itself," Skinner said of Krueger. "He’s incredibly intelligent, he’s got a lot of experience in numerous situations I think will benefit him, but for me, the thing that sticks out is his genuine excitement to be in Buffalo and to get things rolling, and as a player that’s the kind of thing that excites you. When a coach has that, I think sometimes when your leader has that, it can be kind of infectious and it can sort of spread from him on down. It’s nice to see he has that."

Once the conversation was completed, Botterill proceeded with negotiations that culminated in Skinner committing to Buffalo through the 2026-27 season. The contract made him the league's 16th highest paid player and includes a full no-movement clause, which prevents the Sabres from trading Skinner without his permission.

The contract also comes with immense expectations. The Sabres' eight-year playoff drought is the longest in the league, and 22.5 percent of their projected $83 million salary cap for 2019-20 is going to Skinner and Eichel.

Skinner scored a career-high 40 goals and matched his previous best of 63 points while appearing in all 82 games for the Sabres this past season. He has only missed three of a possible 328 games over the past four seasons and has never missed more than 18 in a season since a concussion sidelined him in 2011-12.

Since the start of the 2010-11 season, Skinner ranks fifth in regular-season even-strength goals, trailing only Alex Ovechkin, John Tavares, Patrick Kane and Steven Stamkos. The contract will cause many to expect Skinner to continue that consistent goal scoring.

However, he welcomes the challenge. Skinner has faced those sort of expectations since being drafted seventh overall by Carolina in 2010. To him, no one can expect more from Skinner than himself.

"I think you expect to keep getting better," Skinner said. "Any athlete in this sport is a competitive person, I think. You put pressure on yourself to perform and you hold yourself to a high standard. For me, that’s not going to change. That’s a mindset. I don’t think it can be changed by outside influence. I think it’s something that you kind of have in you. I know there’s going to be more expectations, there’s going to be talk about it in the media and stuff like that. But for me, I just focus on playing."