David Bellavia acknowledges he does not know what lies ahead after the Army’s official announcement that he will receive the Medal of Honor on June 25 at the White House.

But he does realize that, as of now, his life has changed forever.

The Lyndonville High School graduate met reporters at the Army recruiting station in Cheektowaga on Tuesday, where he reflected on the events of Nov. 10, 2004, in Fallujah, Iraq. During intense, house-to-house fighting that day, he is credited with saving the lives of the squad he led.

Now he is destined for a medal ceremony conducted by President Trump and some kind of return to Army service. On Tuesday, he seemed almost relieved to be surrounded by uniforms and military trappings once again.

Bellavia listed for the cameras all the men who fought with him in Fallujah that day, recalling their contributions to winning the firefight and the combat that resulted in victory. That’s when he acknowledged what is expected of a Medal of Honor recipient – a continuing duty to the Army and fallen comrades.

“I have so much respect for the men who wear this,” he said of the nation’s highest military award, and for those who were not able to be with their families.

“Everything has changed,” he added. “I have to represent those people because that’s what we have to do.”

Now on leave from his WBEN talk show, Bellavia explained that his platoon was assigned to clear a block of nine buildings during some of the toughest fighting of the Iraq War. A cannon malfunction on a Bradley Fighting Vehicle meant they would have to kill or capture insurgents without the advantage of armor.

The Army describes his actions as he encountered member after member of the enemy force, each of whom he fought at close range.

“That night, Staff Sgt. Bellavia single-handedly saved an entire squad, risking his own life to allow his fellow soldiers to break contact and reorganize when trapped by overwhelming insurgent fire,” the Army’s official narrative states. “He then voluntarily entered and cleared an insurgent strong point, killing four and seriously wounding another.”

Bellavia said he never envisioned a news conference or White House ceremony in his future – only that the “wheels had come off” their situation. He tried in that moment in Iraq to remember hymns he  learned as a kid, but he could only conjure mental scenes from – of all things – “The Exorcist” movie.

“I probably never thought I would spend the rest of my life in that moment,” he said. 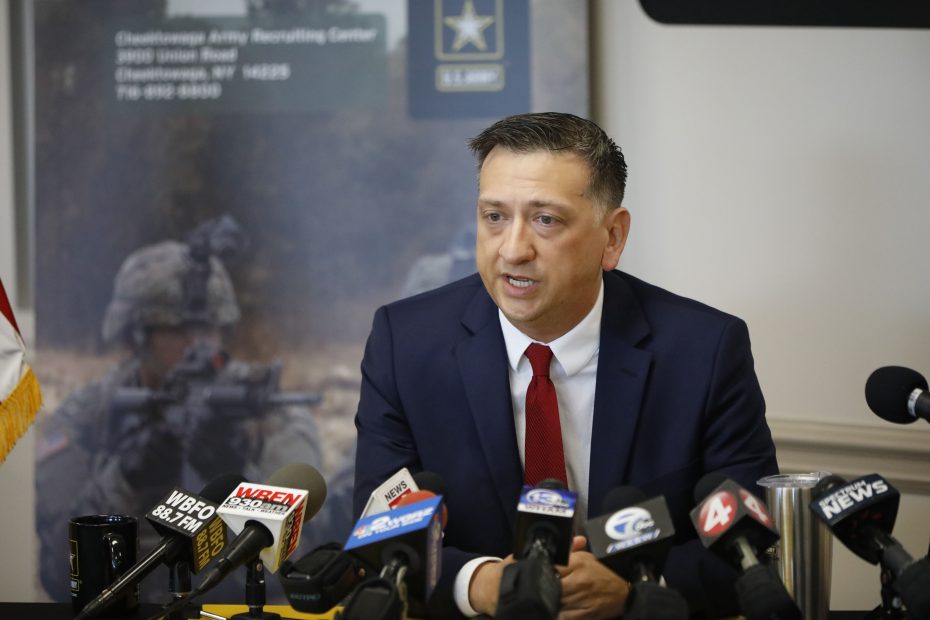 Bellavia has always dismissed the controversy surrounding the Iraq War, feeling only a duty to the mission and the people serving with him. The goal that day and all days in Iraq, he recalled, was that “you have to stop the threat.”

As far back as his theatre major days at the University at Buffalo, he added, he has reveled in being part of a team.

“Win or lose, we were part of something,” he said. “I’m really motivated by being part of that dynamic. I love that camaraderie.”

At 43, the father of three anticipates a new life apart from espousing his conservative politics on Buffalo radio. He expects some new kind of military service, speaking at installations around the world and being part of the Army’s recruitment efforts – even urging young people on Tuesday to consider a career in the service.

He looks to be part of “closure in Iraq” for veterans of the war, and he knows that the opinions he once shared on daily radio will now be viewed differently. The medal changes everything. “It separates you, but at the same time, it automatically demands that you are not an individual,” he said. “I’m prepared for that.”

Speculation of a political future

Bellavia waged a strong but unsuccessful campaign for the 27th Congressional District in the 2012 Republican primary, losing to Rep. Chris Collins. Following Collins’ indictment on federal charges of insider trading last year, however, Bellavia was prominently mentioned as a potential successor – and is again for 2020.

He mostly dismisses that speculation. Instead, he embraces the labels of soldier, infantryman, conservative and Republican, but he says he never checked for party affiliation of the dog tags of his comrades.

“It may break a lot of hearts, but Democrats are pretty brave and they shoot straight,” he said, insisting that he has never eyed political office because he was “bored” or needed to advance from the Assembly, to the State Senate, to the House of Representatives.

“In 2012 I ran in a primary, and all these things were still part of my experience. What difference does an award make?” he said. “I have no need, no desire, to draft off the blood of a lot of people who sacrificed.”

Will he completely shut the door on running for the Collins seat next year?

“It would depend on who asked me and what the circumstances are,” he said.

When asked to recall his conversation last October as Trump informed him of what lies ahead, Bellavia labeled it “pretty humbling; pretty life altering.” The call arrived on his father’s 75 birthday, he said, just a year after the Lyndonville dentist’s death.

The close of his phone conversation with the president that day, he recalled, ended with the same admonition: “Good job, David. Way to go, man.”