The National Cancer Institute has reaffirmed its support for Roswell Park Comprehensive Cancer Center by renewing its status as one of 50 elite cancer centers nationwide and announcing a new $22.5 million grant that will bolster breakthrough treatments, cancer prevention efforts and clinical trials.

“You have to excel in so many areas to earn this — patient care, bench research, clinical research, education for the next generation of cancer scientists, and how you’re reaching out to your community,” Johnson said. “We have incredible teams working in all those areas, all fired by the passion to defeat cancer."

Cancer survivors sat in the front rows of a packed conference center to hear the announcement. Afterward, several of them circled a bell that rings on campus when a patient finishes treatment.

The five-year grant is $3.5 million higher than the previous one. It came after Roswell Park submitted a 1,700-page application and the National Cancer Institute put Roswell Park through a rigorous peer review of its organizational leadership and structure, as well as its ability to reduce the cancer impact in the region.

The announcement came as other cancer care providers in the region have amped up services, including with doctors and an administrator who once worked at Roswell.

Dr. Victor A. Filadora left his job as senior vice president and chief of mission support services at Roswell Park to become president of the collaborative, forged at a time when hospital systems seek new revenue streams as a growing number of surgeries are being performed in outpatient centers. 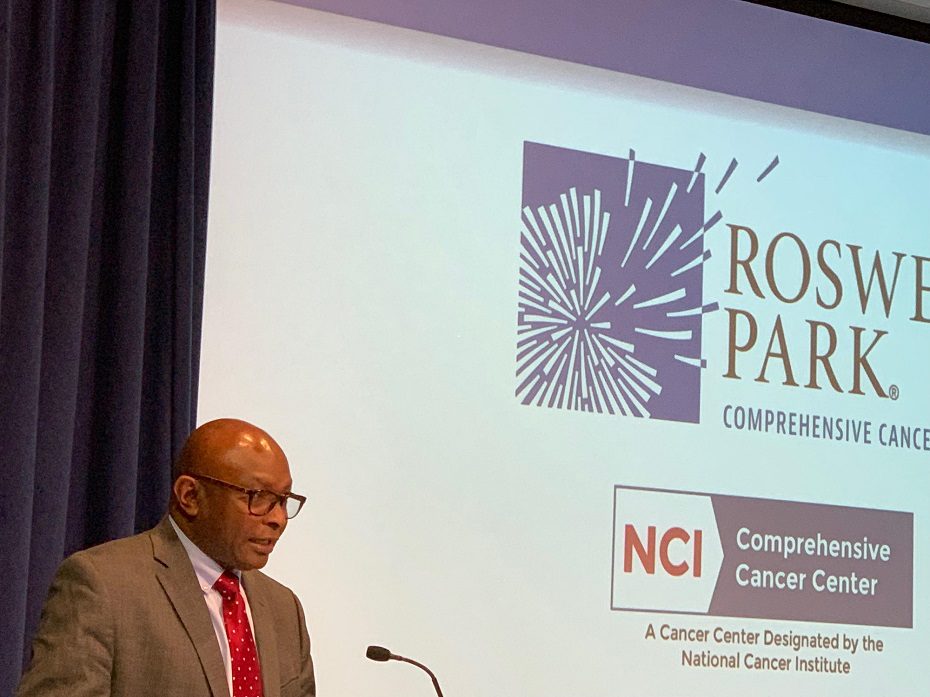 That said, Rep. Brian Higgins, D-Buffalo, was among those on hand for the announcement who underlined the importance of Roswell Park in a city with a revamped waterfront and small business base.

“The anchor of that revitalization is Roswell Park Cancer Institute, the anchor of the Buffalo Niagara Medical Campus, which is creating … employment through research dollars, thus creating a demand for residential development of all these beautiful historic buildings that we have,” Higgins said.

Odunsi and Johnson and said the two steps the National Cancer Institute took will continue to give cancer center doctors and staff access to other top comprehensive cancer centers, as well as boost key research tools at the Buffalo cancer center used by oncologists and researchers across many specialties.

The grant money mostly will be used to fund shared equipment and resources so a greater percentage of other grant money can go into specific research. Otherwise, Johnson said, “the cost to the [individual] investigator is huge.”

Much of the financial infusion will fuel continuing efforts by Roswell and its closest partners to develop immunotherapies starting to show progress in even the most advanced, hardest-to-treat cancers.

Some of the National Cancer Institute core grant will be used to expand the center’s nearly $600,000 Helios CyTOF cytometer, one of only about a dozen such machines in the country, which allows researchers to deeply examine cancer cells and immune cells and look for insights into how cancer cells try to escape from immune attack. Hundreds of thousands of additional dollars are needed to staff and operate the equipment each year.

“When we give immunotherapy,” Odunsi said, “we want to understand if it's working, how is it working? If it's not working, why is it not working?”

Ovarian cancer survivor Kathleen Maxian told the Roswell audience that nearly a decade ago she decided to get a second opinion after her gynecologist suggested surgery for the cancer without checking first with Roswell. She disregarded that advice at the recommendation of a family member in the medical field. She had surgery at Roswell less than a week later instead, and, after two recurrences treated at the cancer center, has been cancer-free for six years.

Studies show that women who had ovarian cancer surgeries performed by gynecological oncologists who are specialists in such procedures, and who work at high-volume hospitals, did better in their first year compared to those who did not.

“Roswell Park has five of these specialized surgeons,” said Maxian, of Pendleton, who is founder of the Ovarian Cancer Project and has served on several National Cancer Institute advisory panels.

“We at Roswell demonstrate to the NCI and the whole country that we have the expertise, we have the strategy, to put the tools that we have been handed … to use for the benefit of our patients — patients in Western New York, and patients beyond our region,” Odunsi said. “Moreover, we put them to use by generating an [economic] impact of more than $1 billion annually in the process.”