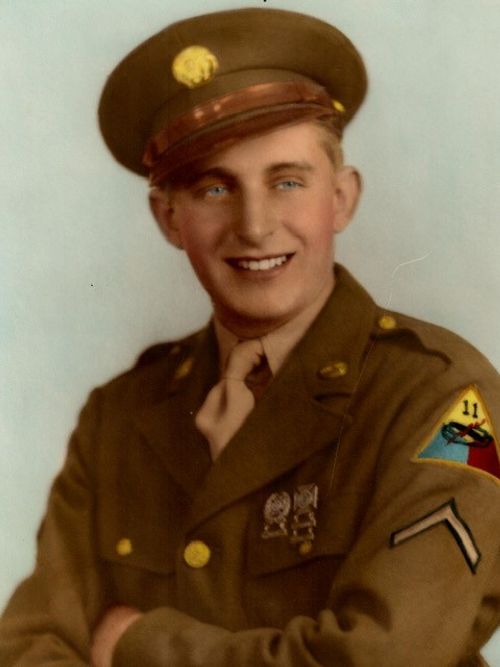 Harvey A. Burton Jr. held onto the photos a Jewish soldier from his platoon had taken of the horrors they witnessed when liberating World War II Nazi death camps.

Years later, Mr. Burton would show those pictures to local high school students when discussing his military service. He did not want the world to forget the inhumanity inflicted on concentration camp prisoners.

But the war was something Mr. Burton did not dwell upon. The Purple Heart recipient had lost his two best friends in the conflict.

On Sunday, after a long illness, Mr. Burton, 94, died at his home in Hamburg.

“My dad seldom spoke of his combat experiences,” said Thomas H. Burton, his son. “He went to war with his two best friends from South Buffalo. He was the only one to survive. Christmas Eve services were also accompanied by tears for his buddies who died during the war.”

A member of the 11th Armored Division, Mr. Burton fought in the Battle of the Bulge.

While he was recuperating from battle wounds, he and other soldiers were visited by the famed Gen. George S. Patton.

Of the photographs detailing atrocities at the Mauthausen and Gusen concentration camps in Austria, Thomas Burton said his father could not have imagined that one day some people would deny the Holocaust had occurred.

“The photos showed the ovens, bodies stacked like cord wood and electrified barbed wire fences and even the whips used on the prisoners,” said Thomas Burton, a well-known defense attorney.

In describing his father, he said, “Our dad typified the quiet heroes of the Greatest Generation that is almost gone.”

But there was at least one bright spot that had a connection to the war. Mr. Burton married the former Sheila Newnham, a veteran of the British Royal Air Force, who had moved to Canada after serving in World War II. She died in 2014.

Before Mr. Burton was drafted into the Army, he had attended Hutchinson Technical High School. After the war, he enrolled at the University at Buffalo and after graduation went to work with Blue Cross/Blue Shield.

He worked as an auditor for the health insurance company and retired, after 35 years, in 1987.

An outdoor enthusiast, Mr. Burton enjoyed fishing and hunting. He played golf and was on the pool team at Hamburg American Legion Post 527.

In addition to his son Thomas, Mr. Burton is survived by another son, James; a daughter, Pamela Mattulke; two grandchildren and two great-grandchildren.