Restoration of a vintage carousel is proceeding toward its expected opening at Canalside in 2020, with five horses and an ostrich the latest of a 34-animal menagerie to be worked on.

"I'm blown away," said Assemblyman Sean Ryan, who on Monday visited a workshop near the Herschell Carrousel Factory Museum in North Tonawanda.

Ryan said he remembers how the wooden animals once looked rundown.

"I saw the figures when they were being disassembled," said Ryan, who secured $600,000 in state money toward the restoration. "It really took imagination to figure out what they were going to look like, but this far surpasses what I closed my eyes and imagined."

The rare three-row, park-style carousel will be turned into a glistening, colorful attraction.

Ryan also saw the Wurlitzer band organ and heard its booming sound that will play music in the restored carousel. The band organ was purchased by Buffalo Heritage Carousel in 2018.

The carousel was kept in storage for over 60 years, and Ryan wondered whether the carousel could look as good as it did shortly after it was built in the Spillman Engineering Co. factory in North Tonawanda in 1924. 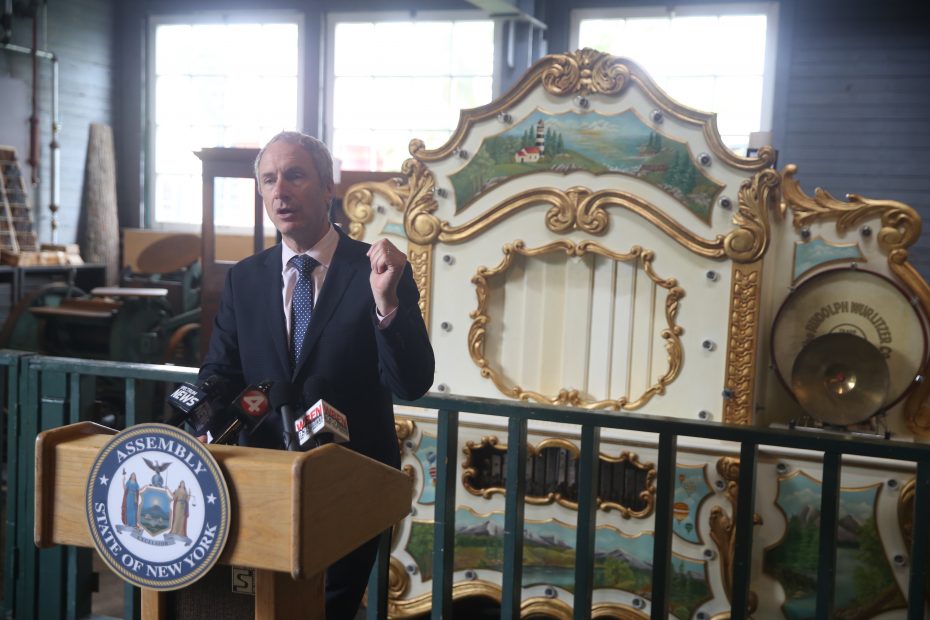 State Assemblyman Sean Ryan checked out the progress of a vintage 1924 carousel being restored by Buffalo Heritage Carousel volunteers. He spoke in front of a recently rehabilitated Wurlitzer band organ for the carousel during his visit to the Herschell Carrousel Factory Museum in North Tonawanda. (John Hickey/Buffalo News)

He added that he was impressed by the skill of the mostly volunteers who have toiled to bring the menagerie back to life. They have been trained by Rosa Patton, a renowned carousel painter based in North Carolina who returns periodically to check on and supervise the painters. The lone giraffe in the workshop, a block from the Herschell Carrousel Factory Museum in North Tonawanda, was painted by Patton.

The five horses and ostrich will be completed over the next two to three weeks. When they're done, that will leave three horses, three chariots, a sea serpent and 14 sideboards to be painted.

"It feels like we're seeing the light at the end of the tunnel," said painter Linda Chaffee of Akron, who added, "I can't wait to ride it."

"It's more than halfway, so that gives you a better perspective as to how long it will take us to be done," said Kathy Kwiatkowski of Clarence. "We're getting closer to the finished product."

As she spoke, Christine Kasprzak of Cheektowaga blended yellowish-brown and ivory colors as she painted a horse's hindquarter. Silver and gold leafing added to the whimsy.

"What the volunteers are able to pick out and to paint on these horses is really exceptional," Ryan said. "People from Buffalo are going to love this when it comes out."

At Ryan's insistence, it will cost just $1 to ride the carousel so it can be affordable for everyone.

"Next summer, you'll be able to come down, take the bike ferry, get an ice cream cone, and go on the carousel and go to the children's museum," Ryan said.

"It will be one more really nice amenity for Western New Yorkers, " Ryan said. "And, if we like something, usually the larger area likes it, too. So I think we will be pulling people from outside to see this great attraction."