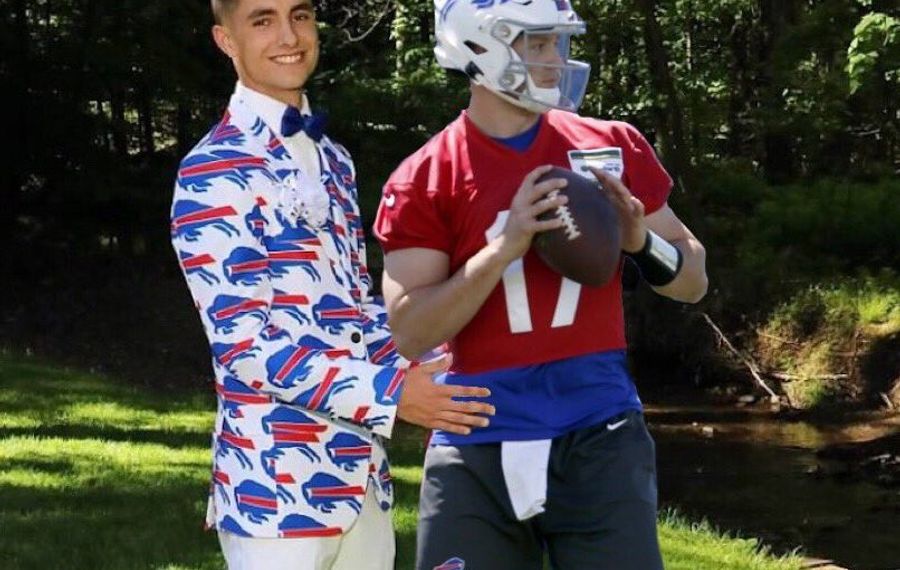 Jonny Wood’s love for Bills quarterback Josh Allen was apparent when he posted a Twitter video of Allen with the music of Mariah Carey’s “All I Want for Christmas is You.” The result was more than 408,000 views.

He continued showing off his Bills love with another viral moment. Wood wore a Bills tuxedo to his senior prom at Arcadia High in Greece, outside Rochester, last week. The result has been another social media uproar.

The photos from the prom were posted with Wood wearing a white jacket with Bills logos, white pants, a blue vest and blue tie. The outfit also featured white shoes with one red shoelace and the other blue, the words “Let’s Go Bills” and Bills logos. His left shoe had the No. 1 and his right had No. 17, in tribute to Allen. Only thing missing was the Zubaz pants.

The jacket was ordered, but the rest of the outfit was pieced together by Wood and his mother. The shoes took four days.

Prom was awesome last night, @JoshAllenQB ended up showing up! @BuffaloBills thanks for inviting the QB1! pic.twitter.com/VH8XkhjAko

“I just love the Bills, and somebody said it would be crazy if I wore a Bills tux,” he said. “We looked it up online, ordered it and I wore it. … It’s my senior year, so why not?”

“I’ve been a Bills fan my whole life. My dad raised me that way. I love football so much. I’ll take off from work Sunday and watch all the games I can. I love the team. I go to training camp. I try to meet the players. My Twitter revolves around Josh Allen.”

Wood’s date, Maddy Burke, deserves credit for a good sense of humor. These are her prom photos, too.

“We’ve been dating for a year or so and she was skeptical at first ,” he said. “But then she thought it was awesome and she was really cool about it.”

So what was the reaction when they arrived at the prom?

“It was kinda mixed,” he said. “Some people were giving me weird looks, but all my buddies and people I’m cool with were saying it looked awesome.

“I told a couple of my buddies in advance that I was wearing it and they thought it would look terrible. But they came up to me and said it looked great. I think I shocked some people with how good it looked.”

Along with photos with Burke, Wood has a prom photo with Allen, thanks to photoshop.

“I love that he has the intangibles that you can’t teach — the poise and the patience in the pocket and the ability to take a shot downfield,” Wood said. “Just unreal athleticism. You can’t teach that.”

"Hopefully, I’m at training camp soon," he said. "I can't wait for the season."