It was with pride and pain that Buffalo Bills safety Siran Neal wore his new No. 33 jersey as a tribute to his late childhood friend, as the second-year pro spent an afternoon last week running around with a handful of teammates and horde of children at Hillview Elementary School in Lancaster.

“My brother, he died, he got in a car crash right before I got drafted last year,” Neal said. “It was pretty hard on me. But I got this number in remembrance of him. He wasn’t really my blood brother, but he’s been my best friend since I was little, so actually growing up, me and him have been through a lot of things.”

Montrez Doran Brown, who wore the No. 33 in high school, was killed in a single-car accident in May 2017, just south of Neal’s hometown of Eufaula, Ala., when the driver of a Mercedes-Benz sedan he was riding in reportedly refused to stop for police. The car left the roadway, crashed into a ditch and overturned, ejecting both men, who were not wearing seat belts.

He had a history of trouble with the law.

In April 2013, Brown was arrested, along with two others, and charged with murder in the stabbing death of a 17-year-old boy. But before the verdict, while out on bail in August 2015, Brown had his bond revoked after being arrested for DUI and lying about his identity to police.

In October 2016, Brown was found not guilty on the murder charge and freed from jail, able to carry on with his life.

Seven months later, he was gone.

“Just growing up with him, you build a bond,” Neal said. “He was a close person to me that I lost, and I hate that it happened, but he’s in a better place now.”

I wear this number with pride and full of pain. I changed my number because last year right before I got drafted I lost my brother due to a car accident. He wore number 33 in high school. So I give this promise to him to give it all I got and leave it all on the field everyday. Day in and day out. I love you bro #RIP #TREZ #LONGLIVETREZ #billsmafia

Neal, 24, the Bills’ fifth-round draft pick out of Jacksonville State in 2018, spoke after volunteering his time in an event to promote the NFL’s and American Heart Association’s Play 60 Challenge, a program to inspire kids to exercise for an hour each day. He was among more than a dozen Bills players at the event.

He has twin daughters who will turn 3 years old in July.

“I love coming out here,” Neal said, “because I have kids of my own and I know how to act with kids. And I know how fun it is for them to see guys like us to look up to, big dreams and all that. So I come out here and have a lot of fun with all the kids, put a big smile on their faces. And you actually get closer to your teammates when you’re out here bonding together.”

Neal, who wore the No. 29 as a rookie, was able to switch to No. 33 after running back Chris Ivory, who wore it last season, was released in March.

Cornerback E.J. Gaines, who initially claimed No. 33, which he wore while playing with the Los Angeles Rams, agreed to surrender the digits, Neal said. Gaines wore No. 28 with the Bills in 2017 and will wear No. 26 this season.

Neal also changed his Instagram profile picture to a photo of Brown wearing a No. 33 jersey as a kid.

A sentimental image is seared in his memory.

“My daughters were really young when he was holding them,” Neal said. “And he has a daughter of his own. Him having a daughter before me taught me little things about being a father. He was a great father to his daughter.” 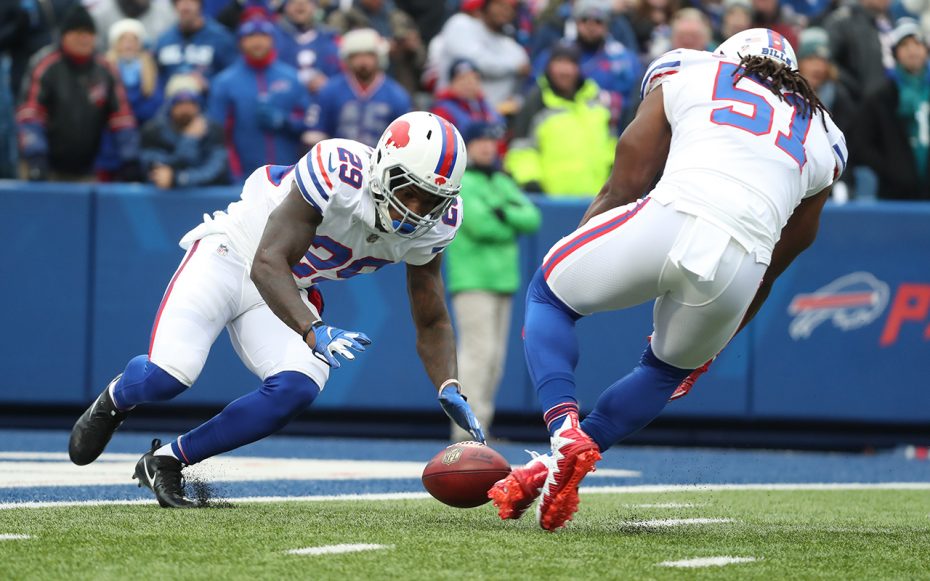 Bills defensive back Siran Neal downs the ball on the one-yard line on a punt on Sunday, Nov. 25, 2018. (James P. McCoy/News file photo)

The 6-foot, 206-pound Neal played in all 16 games last season, primarily contributing on special teams. He recorded 11 tackles, including a sack, a forced fumble and a fumble recovery.

In addition to a new number, he also has a new position this year. Neal has worked exclusively at nickel cornerback during spring practices. While he played safety in 2015, linebacker in 2016 and cornerback in 2017 at Jacksonville State, he said returning to corner felt like coming "home."

"I'm seeing a lot of things that I've seen before. I just feel more comfortable," he said.

It remains to be seen whether the position switch is permanent or just experimenting during the spring. Either way, Neal is facing a critical training camp. The Bills added to both cornerback and safety this offseason, signing Kevin Johnson and Gaines and drafting Jaquan Johnson. As a fifth-round pick in 2018, Neal is no longer a sure thing to make the roster.

"This is a year to come out and show coaches that they can depend on me – come out and do everything the right way," Neal said.

Bills linebacker Lorenzo Alexander, 36, has taken Neal under his wing, reiterating the importance of playing special teams and inviting the young defensive back out to meals and to spend time with his family.

"One thing I try to remind him – because he wants to do so well and be perfect – is just relax, you’re good, take it in stride and grow with the moment," Alexander said. "He’s a guy that has all the tools that you would want a football player to have – big, strong, fast, physical. Obviously playing at a smaller school and now coming to a defense that may be a little bit more complex, he had to have a little growth period.

"I’ve really seen leaps and bounds from last year at this time to this year. I really love where he’s at mentally and physically. He’s definitely developing into a guy that we can count on."

Neal acknowledged the difficulty in jumping from the NCAA’s Football Championship Subdivision to the NFL.

“It was definitely a learning curve, a bigger learning curve than I thought,” Neal said. “But coming in from last year to this year, I’m looking to just get better every day and have fun with it and win games.”

Each day he pulls on his jersey, he’ll think about a close friend whose life took a far different turn.