It took longer than usual for golfing buddies Scott Winkler and Jeff Farrell to get their clubs out and get onto the golf course this year. And when they first tried the Brighton Park Golf Course in the Town of Tonawanda about three weeks ago, they were forced to walk because the ground was too soft for a cart.

It wasn't much better for walking, either.

"It was like playing on a sandy beach," recalled Tonawanda resident Farrell, 58.

They couldn't play all 18 holes, either. The back nine were "under water" and closed off, they said.

Our soggy spring wasn't just a blow to local golfers. It was also a blow to golf course operators.

The long stretches of heavy rain and chilly weather forced municipal courses to open later than normal, to bar golf carts at times and, in some cases, to lower greens fees to offset the poor state of the grounds.

And even when courses were open, many golfers stayed away because conditions were so miserable or they have trouble walking courses.

"It was a workout the first time out," said Wheatfield resident Winkler, 50. "You slept good at night."

While some munis fared better than others, a few said May was almost a total washout and that it's not practical to try to make up this lost revenue by staying open later in the year.

Audubon Golf Course, operated by a private company under a contract with the Town of Amherst, opened April 15. But the course was in no condition to play, and few people showed up that month or in May, said Bryan Culver, director of golf for Value Golf LLC.

"I've been doing this for 40 years, and I'm going to say that I've never quite seen such a wet spring where we got such a late start with the cutting," said Culver, who oversees the 18-hole Audubon course, the Audubon par-3 course and the town's Oakwood executive 9-hole course. "By the time we got cutting, the grass was a foot tall."

Late April and May account for about one-fifth of the course's revenue for the season, he said. The course will stay open as late as possible in the fall, but by October interest in golf tends to fade compared to the first good weekends in spring.

The par-3 course still hasn't officially opened yet because several holes are still too muddy, and Oakwood is open but, as of Friday, for walkers only. 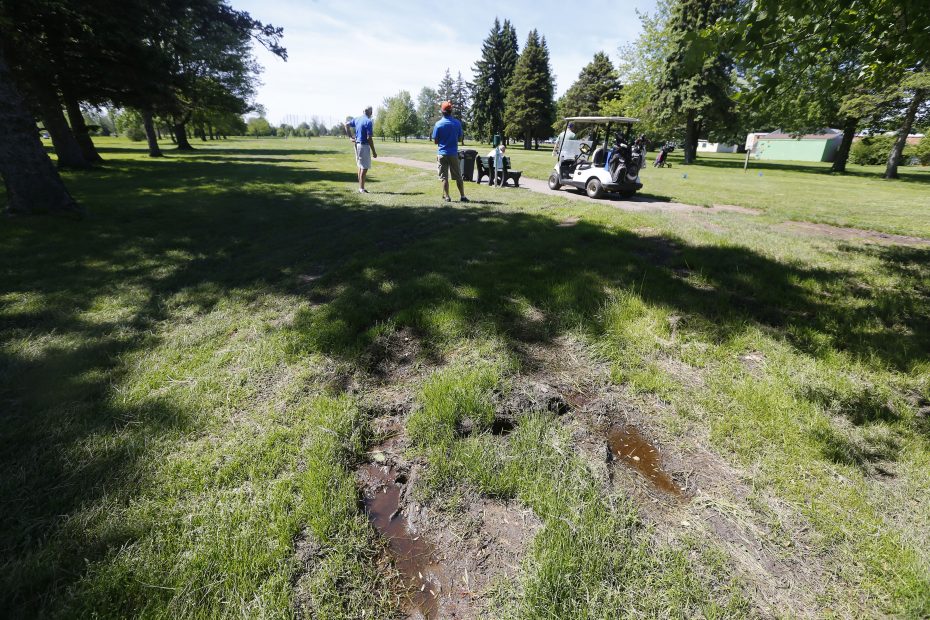 Leagues that play at the 18-hole course were delayed two or three weeks from the normal start of their season.

The outdoor driving range located next to Audubon's clubhouse has shut down on occasion, as recently as Thursday. That's because, if the landing area for the practice shots is too wet, golf balls end up plugged in the mud and can't be picked out easily, or the ball-collection machine sinks in the soft ground.

"It's not really worth it to make a few hundred dollars today and lose a thousand dollars' worth of golf balls," Culver said.

The region hasn't had enough consecutive days without rain to dry out the course and to give the course a better chance to handle a typical rainstorm, he said.

Grand Island resident Keith Mietlicki, 65, said that as a retiree who plays at different courses every week, getting started this year was tough because he and his golfing crew were hard-pressed to find a course dry enough to allow carts at the start of the season. They wound up at the privately owned Terry Hills Golf Course in Batavia.

"We're all older," said Mietlicki, who worked in construction for 42 years and is no longer up to lugging a bag around. "We've got to take the carts."

Total rainfall was average, but days without rain weren't

The rainfall levels for April and May were almost exactly in line with the average totals for those months, according to National Weather Service data.

But the region had more days than normal of measurable rainfall, the average temperature for both months was one degree below normal, and there were fewer days of 70 degrees or higher. So there weren't enough warm, dry and sunny days to dry up the rainfall.

Dan Rizzo, the county's commissioner of parks, recreation and forestry, said the lingering wet conditions kept crews from mowing for fear of damaging the courses, particularly on and around the greens.

The county initially opened both courses to walkers only.

"We were under pressure from the public to get these courses open as soon as possible," Rizzo said.

Grover Cleveland was in the worst shape, with pooling of water on certain low-lying holes on the course, mainly Nos. 5, 6 and 7, that crews used pumps to clear but not before some grass washed away, he said.

The course has an aging drainage system, though the amount of moisture would have presented problems no matter what, Rizzo said. The county has gotten estimates of up to $3 million to upgrade that system.

"It's a lot of money to install in a golf course," he said. 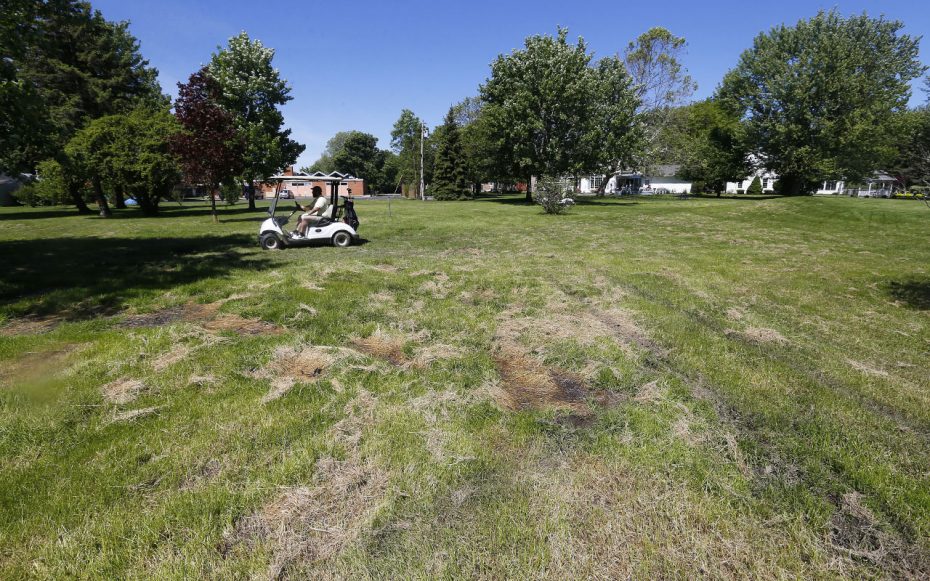 Frank Velocci drives around a soggy spot between the 17th and 18th holes at Brighton Golf Course on June 8. (Mark Mulville/Buffalo News)

"If we get into May, that's a pretty bad start," Sullivan said. "It was just soaking wet. The grounds crew, they were just getting stuck."

There were a couple of days of walking, only, and that's unusual for the course, he said.

The town tries to keep the course open until Veterans Day, but it's impossible to make up the lost springtime golfing, Sullivan said.

"We're going to squeeze every day out of the season that we can," he said.

Daily rounds – not counting golfers playing on a season pass – are down 21 percent so far this season compared to the same point in 2017, which was more of a typical year, Sullivan said.

"That's the tough part about a golf course – you're at the mercy of the weather," he said.

Rounds played in April and May are down 43 percent from last year to this year at the Town of Tonawanda's two courses, and revenue for the rounds is down nearly 33 percent.

The spring was grueling, said Mark Campanella Sr., the town's superintendent of youth, parks and recreation.

Both Brighton and Sheridan Park golf courses opened April 23, about par for the start of the golf season in years past, but Brighton didn't allow carts until late May, and it was a couple of weeks before they were allowed at Sheridan Park, Campanella said.

"Your stone-cold golf junkie is going to get out there," he said, but casual golfers stayed home.

The saving grace for the town is the driving range inside its Paddock Chevrolet Golf Dome, where golfers could go if the playing conditions on the courses were too dreary.

"The golf dome, it was good to have that," Campanella said.

Fortunately, he said, good weather was on its way.

Winkler and Farrell said Saturday's weather couldn't have been better, and the Brighton course was clearly recovering.