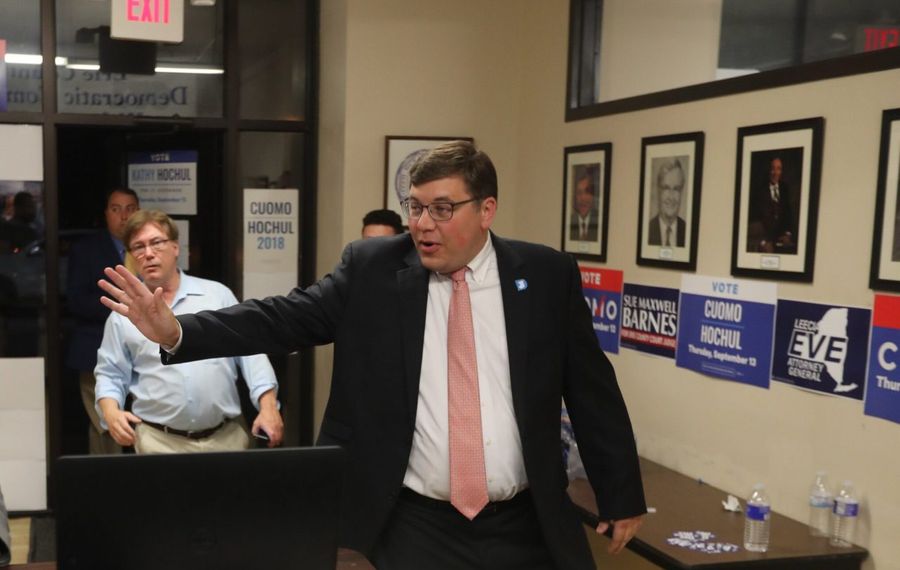 A former statewide Democrat often at odds with the party’s Erie County leaders is demanding an investigation of headquarters finances and alleging “apparent violations” of campaign finance laws.

James J. Eagan of Orchard Park, the former secretary of the Democratic State Committee, contends the Erie County organization led by Chairman Jeremy J. Zellner has “misrepresented” party finances since 2012 and is calling for a State Board of Elections probe.

“What does he do now to handle problems like this?” he added. “Where is the transparency?”

As he has since the County Legislature appointed him in 2017 to the $117,000 annual elections post, Zellner insists his oath of office requires separating party and government functions. He also notes an internal audit is underway to identify and correct “clerical errors” that Eagan says resulted in unaccounted for credit card expenses amounting to about $106,000.

“His claims are simply outrageous,” Zellner said. “These are all clerical errors from software; when you do all this data input there is a lot of room for error. It’s not like I’m out buying diamond rings for my wife or suits for me.”

Zellner explained that new laws and procedures have stripped county boards of their investigative and subpoena powers, shifting them to the state board. He said he will not forward Eagan’s complaint to Risa S. Sugarman, chief enforcement counsel for the state board, leaving any such action to Erie County Republican Elections Commissioner Ralph M. Mohr.

“Commissioner Mohr can send it if he feels it’s warranted,” Zellner said, adding he did not believe Eagan's complaint rises to the level of a state investigation.

Eagan, also a former gubernatorial appointee to the Niagara Frontier Transportation Authority’s board of commissioners, said he will submit his complaints to the state should the local board fail to act.

“If there’s nothing to hide, why won’t he send it to Sugarman?” he asked.

“I will always be a Democrat, but Lynne Dixon is a breath of independence,” he said.

In the past, he has been mentioned as a potential challenger to Zellner for chairman, and often issues anti-Zellner press releases. Now he dismisses the chairman’s “clerical errors” excuse for the discrepancies and believes the local Democrats “knowingly violated multiple laws, multiple times over many years.”

“I believe these violations may not be clerical errors and are most likely not a misunderstanding of the rules governing campaign finance, but more likely, a willful and deliberate obfuscation of the law,” Eagan wrote to the county board. “These possible attempts to circumvent the law may have misled party committee members. cheated donors and possibly affected elections outcomes.”

He then cites 153 instances over the past five years totaling more than $49,000 in which Erie County Democrats failed to itemize expenditures, including one for more than $2,400.

“This repeated offense has no explanation other than incompetence, ignorance or corruption,” Eagan wrote.

After speaking with The Buffalo News late Friday about Eagan’s charges, Zellner sent his own letter to county committee members informing them of the complaint and reiterating his contention that no inappropriate reports were filed.

“I am proud of this organization and its commitment to transparency and full disclosure,” Zellner wrote. “And I know you share my determination to never go back to the days of secrecy and corruption that left our party insolvent, divided, and defeated.”