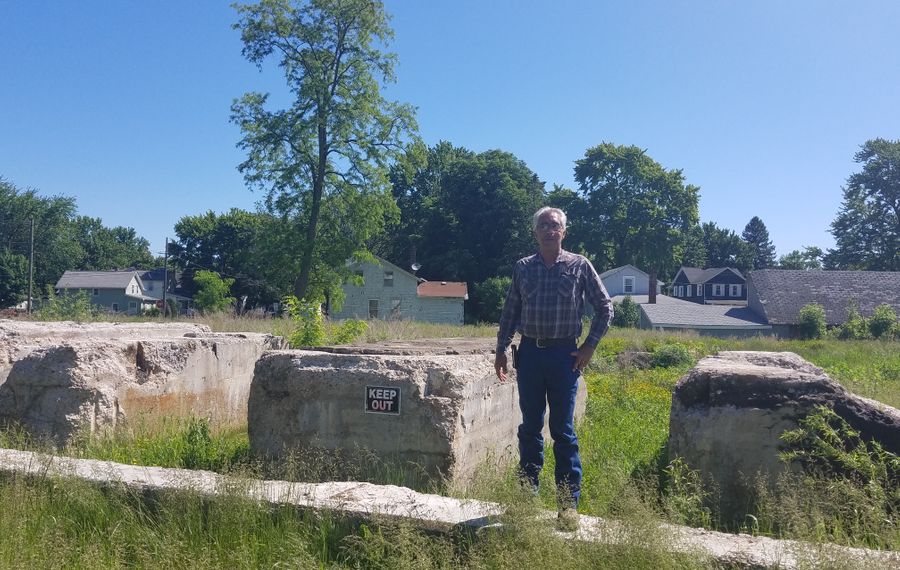 It seemed like a good idea at the time.

Nine years ago, Scott J. Krzyzanowski bought the remains of an old industrial power plant from the City of Lockport for $1,200.

He thought it would be a nice spot for a gas station, maybe offering diesel fuel or compressed natural gas to truckers and campers passing by on Route 78.

But he never built the gas station, and today the Dunkirk native may owe government agencies more than $2.4 million over the property, mostly to the U.S. Environmental Protection Agency, which added the site at 89 Mill St. to the federal Superfund list in 2012 and demolished most of the building in 2014.

"This whole thing is hard for me to wrap my hands around," said Krzyzanowski, who now lives in Dayton, Texas. "I don't know what kind of a mess I've got here now, but I know I've got people who want to develop it" — just not with millions of dollars in liens attached to it.

The Department of Environmental Conservation, the city and Niagara County also are among his creditors.

But he blames New York State for starting the problem. The Labor Department accused Krzyzanowski of disturbing asbestos in the plant's ruins without carrying out an asbestos survey or hiring a licensed contractor to remove it.

That charge by the state agency, which acted on an anonymous tip, blocked his partial demolition plan within days of Krzyzanowski's purchase of the three-story, 16,000-square-foot building in September 2010.

"If I had had any idea it was this difficult to do things in New York State, I certainly would not have done this," he said in interview Friday. "It's ridiculous."

Krzyzanowski operates Liberty Plant Maintenance, which owns other properties in Chautauqua County and in Texas, but he said he can't afford to pay millions on his Lockport lot.

"How much more do I want to invest into that when all I'm going to have is a hard time?" he asked.

But how can he sell the property with liens attached?

"We're going to get those taken off," he said. "Or, if I have to, if New York State chooses to, then I'll shut down my corporation and retire."

Krzyzanowski contends that before he bought the lot, he met with city officials.

"I was told the (asbestos) abatement had already been done, which it had been," he said. "There's been at least one, possibly two abatement projects there over the years."

Jason Dool, chief building inspector and one of the few top Lockport officials from 2010 who still works for the city, said he does not remember any such meeting.

The city Building Inspection Department also got involved, regarding a dumpster that Krzyzanowski placed on the site, which allegedly contained asbestos. Neighbors complained that it was left uncovered and its contents were blowing around the neighborhood.

"All I was doing is cleaning up the garbage," Krzyzanowski said. "I got screwed bad."

He contended that the primary source of asbestos in the building was pipe insulation, no more than 200 feet in all.

"The asbestos that was in there was floor tile from one of the neighbors that changed the tile in his kitchen," Krzyzanowski said. "I won't say which neighbor that was, but he said he was going to dump some garbage in my dumpster. I had no idea."

By 2013, a judge had fined Krzyzanowski $40,000 for violating the city building code by failing to remove the dumpster. The fines have never been paid.

Krzyzanowski's property is across Mill Street from the site of the former Flintkote plant, another Superfund site the EPA tore down. At the urging of residents, the EPA took charge of cleaning up Krzyzanowski's land, too.

The Superfund law allows the government to recover costs of the cleanup from the property owner.

The EPA said Friday the cost of the 89 Mill St. project was $2.3 million, although it hasn't taken any enforcement action "because it is unclear whether (Liberty) is a viable entity."

In 2016, the state Department of Environmental Conservation dug up an underground fuel tank the EPA discovered on Krzyzanowski's property.

Krzyzanowski said Friday he knew nothing of that debt until a reporter told him.

In addition, Krzyzanowski owes nearly $6,000 for eight years' worth of unpaid property taxes. The city hasn't tried to foreclose because of environmental fears.

"I don't know how enthusiastic we would be about taking title to a Superfund site," Corporation Counsel Allen D. Miskell said.

Krzyzanowski met Friday with Brian M. Smith, the city's planning and development director, to urge him to help with developing the site. Smith said he needs to research the situation, which blew up before he joined the city.

"This wouldn't be the first property where we've had a difficult road to development," Smith said. "We haven't given up on the property."