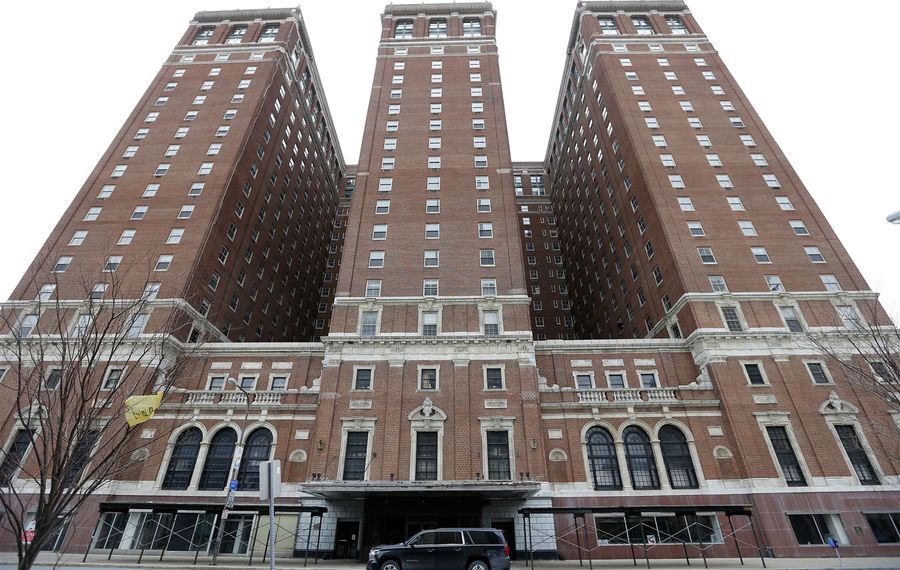 Eight years after buying the abandoned Statler Towers out of foreclosure, owner Mark Croce is now planning to spend $3 million on a series of exterior repairs and renovations as part of a comprehensive restoration of the building's first two floors.

Plans filed with the Buffalo Preservation Board show that Croce's Statler City LLC wants to remove elements of the building facades that are not part of the original design, while restoring stonework, reconstructing three entrance canopies, and repairing, replacing or reinstalling windows.

In all, the work will include a total of 10 overall tasks along all sides of the building facing Niagara Square, Delaware Avenue and West Mohawk, Franklin and Genesee streets.

The goal is to raise the appearance of the building at 107 Delaware to match the significant renovations Croce has already done on the inside, where Statler City has been operating successfully as a catering and banquet facility for the past few years.

"The work is all exterior," said Ray Bednarski, president and CEO of Kideney Architects, which designed the project for Croce. "Mark has done some fabulous work on the inside of the building over the last seven to eight years, but he really wants to bring that to the outside of the building because you can't tell in some cases that the inside looks fabulous because the outside isn't matching the quality right now."

The Preservation Board will consider Croce's application and the designs by Kideney on Thursday. The project does not require Planning Board approval.

If the proposal is approved, Bednarski said Croce hopes to start work this summer and "then see where it takes us." The designs aren't yet final enough for Buffalo Construction Consulting to project a schedule, but the architect said it could be completed by early next year.

Originally designed by George B. Post and Sons as the Hotel Statler, the 18-story building with its three towers was constructed in 1923, replacing a previous 300-room hotel that had been built in 1908 on another site and was later demolished.

The hotel included a ballroom, four dining rooms, a lounge, a tearoom, a cafeteria, a swimming pool, Turkish bath and a 24-chair barber shop, as well as a marble lobby with a 28-foot ceiling. It was the flagship of Ellsworth Statler's chain of hotels, which later included other locations in Cleveland, Detroit, St. Louis, New York, Boston, Washington, Los Angeles, Dallas and Hartford, Conn.

But as demand for hotel rooms in Buffalo fell, the Statler was gradually converted to offices starting in 1948, until the last hotel rooms closed in 1984 and the 750,000-square-foot building became the Statler Towers. It went through several owners before it was auctioned off in August 2010 after British investor Bashar Issa was forced into bankruptcy.

Croce bought the 18-story Statler in 2011 for $200,000, plus $500,000 in back taxes that he paid to clear the building's past debts. The veteran restaurateur renamed it as Statler City, and has invested over $7 million in an overhaul of the first three floors to create a successful banquet and events center, which reopened on Dec. 31, 2011.

"The Statler is a very popular building in Buffalo's social circles and preservation circles. It's such a prominent building on Buffalo's Niagara Square," Croce said. "I'm going to continue to do my part to be the steward of the building and improve its street appeal."

But aside from emergency stabilization, very little work has been done on the outside of the building, whose upper 15 floors remain vacant while the exterior continued to languish.

That's because Croce had returned his attention to his Curtiss Hotel project on West Huron Street and then the Emerson School of Hospitality building next door. Croce had been working on the Curtiss nearly a decade ago but stopped work when the Statler fell into bankruptcy. After the Statler was stabilized and returned to the tax rolls, he said, he was able to turn back to those projects, totaling more than $60 million, and he's only now getting back to the Statler again.

"The Statler is a massive building and a massive undertaking," he said. "It's going to take a lot of time and money and planning."

Croce has projected a full redevelopment would cost well over $100 million, but he insisted that the first steps required public help to shore up the neglected building's crumbling facade. That work was expected to total about $12.5 million, so the city and state agreed to give him $5.3 million in grants in three installments, with the rest coming from his own funds – including the current work.

So far, though, he has drawn down only $2 million of the government dollars, while he will have spent $8 million of private money once the new work is completed. After that, he plans to seek the second public installment of about $2 million to cover roof repairs on the top of the building and other work. He also plans to invest in security, fire and sprinkler systems.

"A lot of it is basic infrastructure work, and then we'll look to the next phase of getting investment capital to bring the building back," he said.

In the meantime, the exterior renovations will also address the frequent complaints he says he receives. "We thought it was the most appropriate time to get started," he said. "The building sorely needs some lipstick on the outside. The first three levels really need to be upgraded."

[RELATED: Croce "in no hurry" on Statler, estimates work could cost $100 million]

Bednarski said his firm and Croce have conducted research and "a little exploratory work" on the building as they've evaluated what work was needed. For example, they thought that certain materials that were added in the 1950s – when the look of the building had been altered – still remained on the structure after pulling back some panels and finding the original facade still intact underneath.

In other cases, prior owners either "removed wholesale stretches of what was ground-level storefront" or replaced masonry with new storefront, so the original appearance has to be rebuilt, he explained. That includes restoring "appropriate-sized windows," the architect said.

So part of the work is "restoring the historic fabric that is still there, or putting something back that is appropriate to the look of the building," Bednarski said. "We're trying to make it look like it's been there. We're not trying to modernize it or put a modern face on it at all. We're trying to restore it so it looks like it was all appropriate."

That means removing the concrete simulated pink granite veneer and clay tile backup from the 1960s, which covered up the original terra cotta, rusticated faux stone ornamental facade. The historic facade must also be repaired and restored, or in some cases replaced with replica stonework or decorative elements where the originals are missing.

That will allow Croce to seek new retail tenants. "If we get this cleaned up and looking good, maybe he can market the spaces again," Bednarski said.

Finally, the project will include restoration of the three entrance canopies to their original look and condition, using historic photos and examples from a similar hotel in Syracuse that is now a Marriott. Workers will first remove the cladding that now covers the original steel canopy frames and will put up "something more appropriate." Bednarski said they are still determining what name will go on the canopy.

"The goal is to try to have something that looks very similar to the original," he said. "Very little of the original detail is still there."