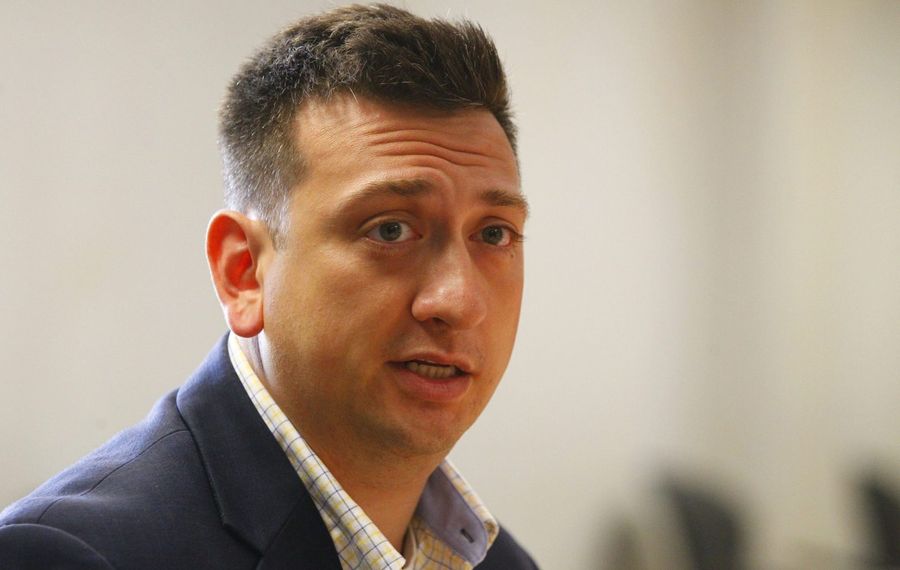 David Bellavia will travel from his Albion home to the White House sometime late this month, where President Trump is scheduled to drape around the Army veteran’s neck a gold medallion suspended by a blue ribbon — the Medal of Honor.

But his journey really began on Nov. 10, 2004, in the dusty streets of Fallujah, Iraq. That’s where the Army staff sergeant, on his 29th birthday, found himself in deadly hand-to-hand combat with some of the enemy’s toughest fighters.

In the end, five of them died. He prevailed.

Now a nation will say thank you.

He will now be instantly catapulted into a national spotlight that his friends say will change his life as the first living Western New Yorker in memory to receive the award.

As news broke late Friday while co-hosting his “Bauerle and Bellavia Show” on WBEN Radio, Bellavia reserved any comment until the official White House announcement expected this week. But he told partner Tom Bauerle on the air that the valor associated with the medal, whether exhibited by him or others, stems from love of country, the military and fellow soldiers.

“That’s the building block of anything you do in a combat zone,” he said. “That love makes you do things you would not ordinarily do. I am super proud of that part of my life.”

Sources are pointing to a three-day Washington observance during the last week of June to which dozens of local friends and supporters may be invited, though official details remain unannounced.

But it is now certain that the Silver Star Bellavia was already awarded for his actions in Fallujah will receive the ultimate upgrade, overshadowing his previous fame.

A re-entry into politics?

Could that translate into another shot at the 27th Congressional District? Indeed, Bellavia took on well-heeled Chris Collins in the 2012 Republican primary, posting a respectable showing in defeat. And his name has already been more than floated for 2020 as Collins faces federal charges of insider trading and a host of fellow Republicans look to possibly succeed him.

In addition, the conservative views he espouses daily on his radio show reflect the uber-Republican district. And any potential candidacy would absorb a major boost from the optics of Trump — enormously popular in the rural-suburban district — slipping the nation’s highest medal over the head of a soldier once again in uniform.

Bellavia, 43, told The Buffalo News last month he feels no overwhelming need to re-enter politics, but would not discount the possibility. It might also prove difficult for him to resist any effort by Trump and his allies to entice him into a race he has waged once before.

Even if he forgoes another run for Congress, it is possible, however, that Bellavia could still be thrust into the public arena. Sharon Edgington, deputy director of the Congressional Medal of Honor Society in Mount Pleasant, S.C., said many recipients go back to work for the Army, traveling to bases and making public appearances as many as 200 times per year.

“They become extremely active,” she said. “They have a sense of duty with the medal.”

Edgington added that the society receives five to seven requests per day for recipients to speak or make appearances at patriotic events.

An 'accurate description of war'

Now Bellavia’s world may return to his Army days and the exploits which he turned into a critically acclaimed book: “House to House — an Epic Memoir of War,” published by Simon and Schuster in 2007 as the war in Iraq still raged.

“It’s not a love letter nor an apology,” he told The News then. “It’s an accurate description of war. People say we don’t need to hear about it. I think you need to. Don’t tell me you don’t have the stomach to read what’s really happening.”

Back then he recounted his men waging urban warfare and house-to-house searches as the enemy rained fire upon them. He told of killing four men that day, only to wrestle with a fifth in a vicious knife battle, culminating with Bellavia thrusting the weapon into the insurgent’s neck.

“I was slamming him with my Kevlar helmet and my bulletproof vest plate. I kept telling him to shut up. His handgun went off, and I found my blade and hit his collarbone and neck,” he recalled. “I put pressure on his carotid artery. In the book, I called this ‘Satan’s version of CPR.’ ”

And he discovered that even the worst of war can produce the unexpected as the dying man used his last seconds to reach up and caress the side of Bellavia’s face.

The son of a Lyndonville dentist and part of a devout Christian family, Bellavia was a theatre major at the University at Buffalo before joining the Army in 1999. As a member of the First Infantry Division (the “Big Red One”) he was first assigned to the NATO peacekeeping mission in the Balkans before shipping off to Iraq in 2004.

He worked in the private sector and for veterans’ causes after leaving the Army in 2005.

For his Army service, he was also awarded the Bronze Star, three Army Commendation Medals, two Army Achievement Medals and the New York State Conspicuous Service Cross. Having received the Silver Star for his actions in Fallujah, he has been in the nomination process over several years for the Medal of Honor, as well as the Distinguished Service Cross, the nation’s second-highest military decoration.

It is not uncommon for supporters to continue advocating for soldiers to receive the Medal of Honor, Edgington said. Normally the process involves a commander or comrades initiating a process in Congress, where the issue could be examined by more than 20 committees.

“It’s not very easy for it to happen,” she said.