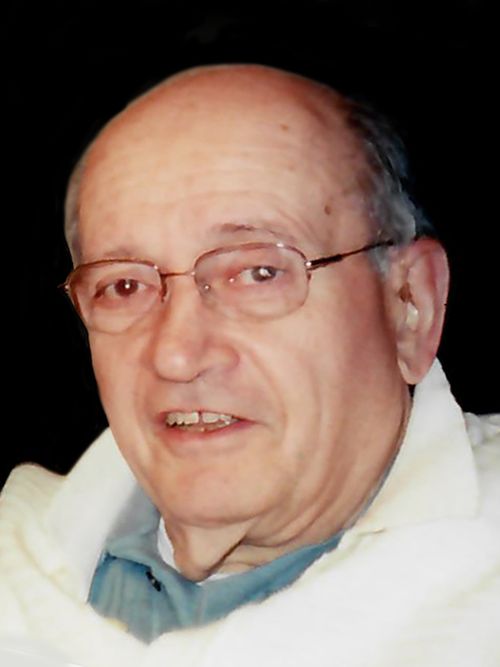 Ralph L. Pignataro was a star baseball player at Grover Cleveland High School who was playing in a local municipal league when he was scouted by the Cincinnati Reds for a possible pro career.

But Uncle Sam wanted him too.

"He couldn't go anywhere because he had to go into the Army," said his daughter, Margaret Ritz.

Mr. Pignataro enlisted on April 18, 1945, serving as a tank driver in Germany, she said.

Despite never making the big leagues, Mr. Pignataro maintained his love for baseball, watching almost every Bisons home game with his brother Lawrence from a seat behind home plate. He also proudly wore a Cincinnati Reds jacket and hat. "He loved his Reds," Mrs. Ritz said.

Mr. Pignataro, a resident of Cheektowaga, died June 4, 2019, in the Veterans Affairs Medical Center in Buffalo after a period of declining health. He was 92.

He was born in Buffalo, the middle child of Lawrence and Margaret Gnozzo Pignataro. His father died when he was young, and Mr. Pignataro grew up on Pennsylvania Street on the West Side with his older sister, Frances, and brother, Lawrence. He graduated from Grover Cleveland High School around 1944.

After completing his Army service, which "he never really talked about when we were little," said his daughter, Mr. Pignataro worked as an agent for Phoenix Mutual Life Insurance Co. while studying for his bachelor's degree in English at Canisius College. He graduated in the early 1950s.

In 1952, he married the girl next door; Serena Rita DeMarie had grown up on Pennsylvania Street too.

Their first child, a son they named Ralph, died a few days after his birth. The Pignataros always remembered "the baby," as they called him, and made sure their four daughters did too. "They always talked about him; they never really got over losing him," Mrs. Ritz said.

In 1963, Mr. Pignataro passed an exam allowing him to work in the Buffalo Schools as an English teacher. His daughter Margaret recalled that his first teaching job was at Boys Vocational High School.

He later worked at Emerson Vocational and Bennett high schools, sometimes at the same time, his daughter said. "He would often fill in at night school at Bennett after working all day at Emerson," Mrs. Ritz said. "They were saving for a house" while living in an apartment on Connecticut Street next to the Armory.

In the 1960s, the Pignataros bought that house, moving onto Greenfield Street in North Buffalo. They lived there through 1983.

In 1967, Mr. Pignataro earned his master's degree in education from Canisius College.

Mrs. Pignataro, who worked as a legal secretary, died in 1984.

Mr. Pignataro retired from teaching in 1987 due to inherited hearing loss, his daughter said. "He taught as long as he could," she said.

Like most teachers, he enjoyed encountering his former students in restaurants and while out shopping, exchanging greetings and reminiscing, Mrs. Ritz said. "He would always tell me when that happened," she said.

Mr. Pignataro was social and funny, his daughter said. "He was big around Cheektowaga, everybody in the area knew him," said Mrs. Ritz.

After returning from the service, Mr. Pignataro was active in the Holy Cross Post 1524, Catholic War Veterans. He served as an officer, including historian, for the group for several years starting in the 1940s. He was also a past commander of Troop I American Legion Post 665 on Franklin Street in Buffalo.

He was an avid bowler and a lifetime member of the YMCA.

He enjoyed listening to live music in restaurants, and sometimes would join the band on stage at the Williamsville Inn on Main Street, which closed in 1998, his daughter said. As a younger man, he would say, "Gregory Peck's got nothing on me!" she said, and in later life, when he was preparing to leave an event, he would announce, "Brad Pitt is leaving the building!"

At her wedding reception, he joined the band and sang a song for her about a bride carrying roses, she said.

Besides Margaret Ritz, he is survived by three other daughters, Catherine Cappellino, Susan Pignataro and Elyse Wack; five grandchildren, four great-grandchildren, a brother, Lawrence Pignataro, and nieces and nephews.

A Mass of Christian Burial will be offered at noon Saturday in Our Lady Help of Christians Chapel, 4125 Union Road, Cheektowaga.