It started with the bees.

After Jennifer Zeitler decided to become a beekeeper, she faced some tough choices about clearing brush from property she owned in Franklinville. She didn't want to use herbicides that would have harmed her beekeeping colony. But she couldn't afford to bring in heavy machinery to remove it.

On the internet she learned about "goatscaping," which relies on the giant appetites of farm goats. The goats eat away unwanted plants.

But while goatscaping has become quite popular in other areas across the country, no businesses in the region offered the service.

So the Orchard Park resident started her own business, Let's Goat Buffalo, and she picked up Erie County as her first client. Beginning last weekend, her six goats got to work consuming invasive Japanese knotweed at Como Lake Park in Lancaster. Zeitler is optimistic about the company's growth.

"It's scaleable," she said. "We've had nothing but support so far from this community."

Zeitler was repeatedly interrupted by curious parkgoers who wanted to know all about her six furry landscapers – the male goats DeeDee and Mr. Craps, and the female goats Opal, Meeps, Oprah and Helcha.

"Are you the goat lady?" a park visitor asked her as her fenced-in crew rested from their gluttonous morning meal of the bamboo-like plant. 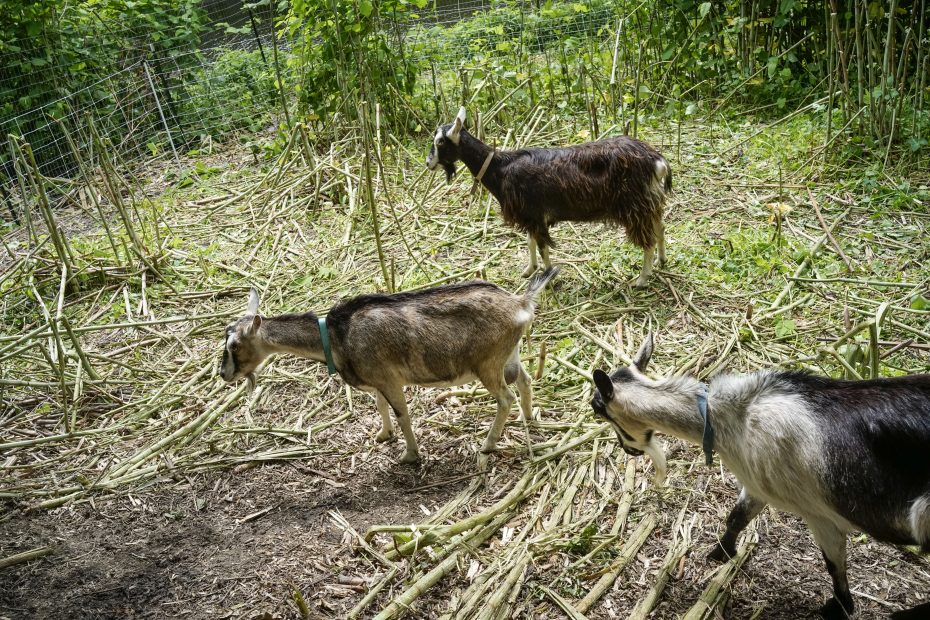 In her first hour at the county park, she was approached by a thrilled botanist and retired professor, who said she looked forward to the return of native plants to the park; animal control and police officers, who suggested the park could use 50 more goats; and a woman with a property at Rushford Lake who passed photos of her yard to her over a wire fence and asked for the goats' help.

Several young mothers with strollers also stopped by and pulled out their phones to grab pictures of the goats at work.

One sighed and said, "Oh, I wish I had a job where I could just eat all day."

Zeitler, a parent who holds another full-time job handling benefits, said she started her business by reaching out to Kerry Planck, who operates a goat farm in Wales and runs a goat milk-based soap and lotions company called Alpine Made. She spent a year volunteering on Planck's farm learning how to care for goats, she said.

Then she bought six of Planck's goats, all of whom had outlived their milk producing or stud service usefulness. The goats range in age from one to 10, with most of them on the older side. As part of the agreement, Planck will board Zeitler's goats on her farm over the winter months.

"We call this the retirement community," she said, referring to the movable pen enclosure in the park island behind the casino.

Setting up the fencing is the toughest part of the job, she said. It involves two layers of fencing, a taller exterior wire fence and an interior, electrified fence designed to keep the goats in and, more importantly, keep unwanted guests and predators like coyotes out. After the goats consume all the brush in the pen, Zeitler and her son relocate the pen to another stretch of overgrown property along the water's edge.

Because of how the tall Japanese knotweed plant reproduces, simply mowing it down does nothing to deter it from springing back up and spreading and can even make the problem worse. Herbicides, meanwhile, are an indiscriminate plant killer and are not ecologically friendly.

Goats, meanwhile, enjoy all sorts of brush and even poison ivy, and they sterilize propagating seeds as the plants move through their digestive tracts, Zeitler said. Goats don't produce results as quickly as herbicides do, and they would likely need to make a few return trips to properties in future seasons. They also enjoy eating plants at a higher height, so they aren't good lawn mowers.

"Sheep are good for that," Zeitler said.

Goats, however, reach areas that are difficult for humans or machinery to access. 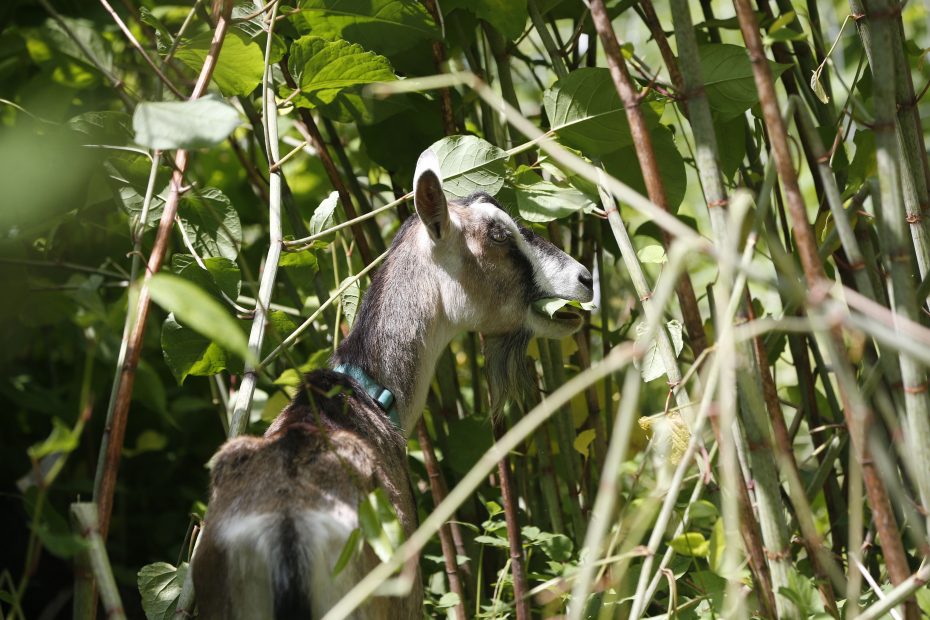 Helcha, one of the goats from Let's Goat Buffalo, munches on invasive Japanese knotweed on Tuesday, June 4, 2019. (Derek Gee/Buffalo News)

Every morning at 6:30, the goats are released from their trailer and get to work, using their necks and legs to tear down the long, overhead stems and satisfy their appetites. They eat leaves first, then stalks, taking periodic breaks to chew and digest. At sundown, the goats head back into their trailer for some supplemental grains and for protection from predators.

The only deterrent for these eating machines is rain, Zeitler said.

Zeitler submitted a proposal that led to a monthlong pilot program at Como Lake Park for $3,500. For county parks administrators, the goal is to see how much the goats can stomach in 30 days and consider whether the program is worth continuing, said Parks Commissioner Daniel Rizzo.

The county had considered having the goatscapers work in the county-owned riverfront parks in Buffalo before settling on Como Lake Park as a first choice. Rizzo pointed out that Como Lake Park had a petting zoo back in 1926, when the county took over the park. So bringing farm animals back to the park seemed like a natural fit.

"It brings people out," he said. "Everything we try to do in our parks is to try to get people to come out and enjoy our parks."