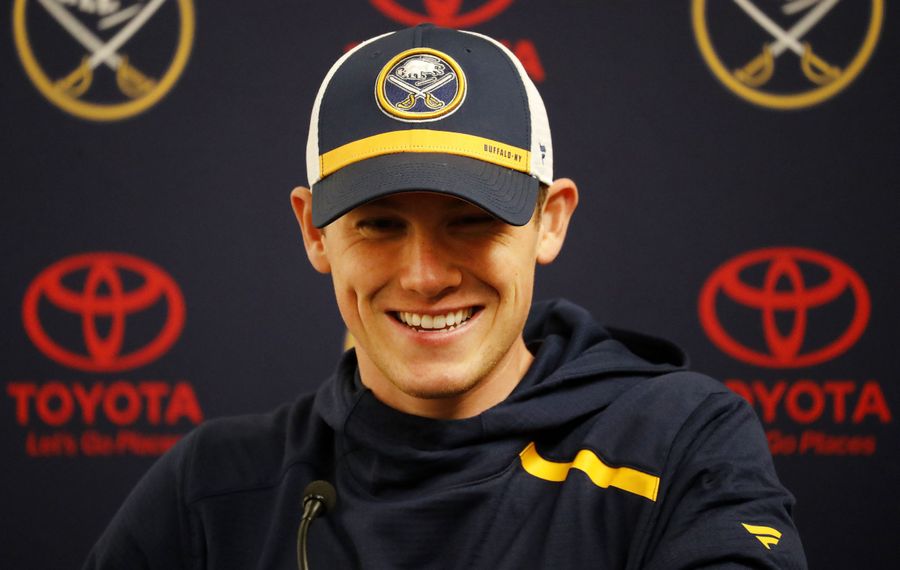 Sabres General Manager Jason Botterill finally has an answer to the question he's been asked since the moment Jeff Skinner arrived in Buffalo last summer.

Skinner, the 27-year-old winger who captivated the fan base with a career-high 40-goals last season, is remaining in Buffalo after signing an eight-year contract worth $72 million that could keep him in a Sabres uniform through the 2026-27 season, the team announced Friday night.

The $9 million average annual value makes Skinner the Sabres' second-highest paid player behind Jack Eichel and the 16th-highest paid player in the NHL. Their salaries will account for 22.5 percent of the $83 million projected cap space this season, which is the sixth-highest combined total for any two teammates in the league.

Skinner scored 10 goals during the Sabres' 10-game winning streak in November, leading to a "Jeff Skinner for Mayor" yard sign being placed in front of a Main Street shop, and matched his career high of 63 points while playing in all 82 games during his first season with the organization.

The timing of a deal is as important as its finality for Botterill. Preventing Skinner from reaching unrestricted free agency July 1 allowed Botterill to give the All-Star an eighth year on the contract and provides the Sabres with ample time to decide how to use their remaining cap space.

Most important, Botterill retained a player whom the Sabres would have a difficult time replacing through trade or free agency.

Skinner owns the NHL's longest active games played streak (661) without appearing in a playoff game and, much like his Sabres teammates, endured a difficult stretch during 2018-19, scoring only one goal in a 22-game span during the team's historic second-half slide.

Yet, Skinner has proven to be one of the league's top goal scorers since he was drafted seventh overall by the Carolina Hurricanes in 2010. Since the start of the 2010-11 season, Skinner ranks fifth in even-strength goals, trailing only Alex Ovechkin, John Tavares, Patrick Kane and Steven Stamkos.

When it comes to Jeff Skinner, Jason Botterill had no choice but to make a deal

Skinner, a native of Markham, Ontario, has scored at least 20 goals in seven of his nine NHL seasons and ranks 10th in that category since the start of the 2015-16 season, scoring more in the regular season during that span than Edmonton's Connor McDavid, Pittsburgh's Evgeni Malkin and Stamkos, among others.

Skinner scored 204 goals during his tenure with the Hurricanes, ranking fifth in franchise history, including those who played for the Hartford Whalers before the team relocated to Raleigh, N.C. Yet, he never achieved the level of success he experienced in Buffalo.

In need of scoring help following the trade of Ryan O'Reilly to St. Louis, Botterill acquired Skinner last August in exchange for prospect Cliff Pu and three draft picks, the highest of which will be in the second round at next month's draft in Vancouver.

The acquisition has proven to be Botterill's best since he was hired in May 2017. Skinner scored 10 goals during the Sabres' 10-game winning streak and was tied for third in the league in goals on Feb. 23, when the team hosted the Washington Capitals in KeyBank Center.

Skinner suffered what appeared to be a knee injury that afternoon, however, he returned for the third period in the 5-2 victory over the defending Stanley Cup champions. He would score only four goals, two of which came in the season finale, with four assists over the team's final 21 games.

Still, Skinner was selected an All-Star for the second time in his career and buoyed the Sabres into contention. Though he finished the season on the second line, Skinner also formed a dynamic pairing with Eichel, Buffalo's 22-year-old center and first-year captain.

The new contract ensures Eichel and Skinner will both be under contract through at least 2025-26, yet Botterill's work has only begun. He has an estimated $20 million in salary cap space with five pending restricted free agents — including center Evan Rodrigues, who should receive a significant raise -- and one unrestricted, 36-year-old winger Jason Pominville.

There are needs to supplement the team's forwards, particularly at center, and on the blue line, where Zach Bogosian (hip) and Lawrence Pilut (shoulder) are expected to miss some time at the start of the season because of offseason surgery.