The season could have unraveled quickly after FC Buffalo was played off the pitch by Rochester in the season opener. And that would have been a pity, considering the team's hard work in executing a 10th anniversary trip to Germany and scheduling two preseason friendlies against quality international foes.

Fortunately for head coach Frank Butcher and his squad, they ran into a downtrodden Syracuse FC at precisely the right time, pummeling the Salt City foe 5-0 last Friday.

With their National Premier Soccer League record level at 1-1, the Wolves will now tangle with the Erie Commodores, considered the club's fiercest rival over the course of its history. Kickoff is at 7 p.m. June 7 at Robert E. Rich All-High Stadium (2885 Main St., tickets).

"From top to bottom, we were strong in every aspect," Butcher said after the stomping of Syracuse. "It started up top; Kieran [Toland] and Nevado [Elliott] worked their butts off, and it's contagious -  if you see someone working that hard, you have to work that hard as well."

Neither Toland nor Elliott played in the opening loss to Rochester, leaving FC Buffalo thin in the attack and continuing a scoring drought that plagued the club in five of its first six matches (five exhibitions, one NPSL game), with the exception a 5-1 creaming of Dortmund XI one of the final days in Germany.

Billed as a striker with a nose for goal at Alderson-Broaddus (NCAA Division II), Elliott fit in seamlessly against Syracuse - tying a club record with three assists - and his perspective was wise.

"I've been here for a week now and have started to learn the players and how they move on the field," the Jamaican striker explained. "It was just about being unselfish and playing in the flow of the game." 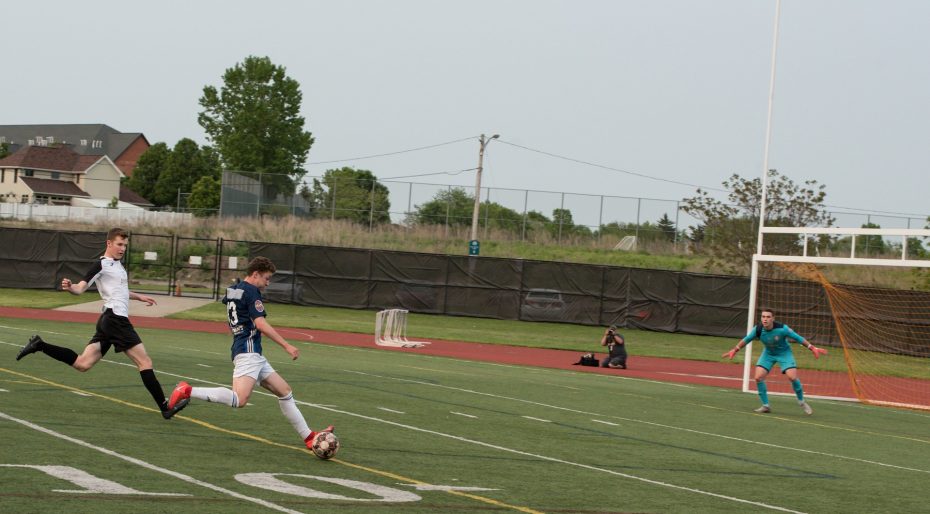 FC Buffalo winger Will Warren fakes a shot with his right before cutting back to his left and scoring against Syracuse. (RJZ Photography)

St. Bonaventure grad Toland, back with the Wolves after two summers away, scored twice against SFC - and rang the post on a breakaway. Typically a center midfielder in Olean, the Scot was deployed as a center forward three years ago for FC Buffalo and is now back in the role in 2019, this time in a 3-5-2 formation.

"I've never been a striker," Toland admitted. "I mean, I was when I was 6 years old, but then I lost all my speed."

[Related: Read a feature on Toland's Scottish background, from 2016]

But Toland is a nice foil for Elliott, as his deft touch and ability to strike from distance complements Elliott's movement off the ball and instincts for finding dangerous areas.

The formation of three defenders, five midfielders and two forwards is very unusual for FC Buffalo - I can't think of a previous season where the Wolves used three in the back with regularity - but it can evolve into a slightly less risky strategy depending on the alignment of the wide midfielders; the formation could resemble a 5-3-2 against certain opponents.

Even for a veteran like Toland, the combination of a position and formation change was a lot to absorb, and the adjustment wasn't immediate for FC Buffalo as a whole.

"I think we struggled with it [initially]," Toland said. "The last two games - against St. Pauli and [Syracuse] - we've proved that we can do it. It's all about know what to do and when to do it."

[Read more: Why you should care about St. Pauli | FCSP's visit a great day for Buffalo soccer]

When asked about the formation change, Butcher explained that faith in his three starting defenders - Josh Read, Chris Walter and Rob Williamson - allowed him to better use a midfield-heavy roster.

"We thought our backs were very good and felt we could risk it," the third-year head coach said. "I think that's our strongest lineup right now."

FC Buffalo can survive with three defenders as long as the midfielders understand their roles - it can be complicated playing with five - and the forwards remain productive.

"The way we did it [against Syracuse], we proved we could score goals," Toland echoed. "That's what we've been lacking."