Bad things happen to women in this world. In Gordon Farrell’s new play, “Girls Who Walked on Glass,” the playwright introduces us to three young women navigating the hazards of modern life in stories adapted from the work of contributing authors Molly Heckerling, Tatiana Gelfand and Lucy A Robbins.

The production marks the start of Farrell’s term as Playwright in Residence at the Alleyway Theatre. Back in the 1990s, Farrell’s work was a fixture at Alleyway. We saw “Voice of America” (1991), “Alice Again” (1992) and “A Tin Star Over Tombstone” (1993), followed by a trilogy of Sherlock Holmes musicals he wrote with Alleyway artistic director Neal Radice. After that, Farrell went on to an eclectic career that included forays into independent film, and this year’s remarkable Broadway play, “Lifespan of a Fact,” co-written by Jeremy Kareken and David Murrell, starring Daniel Radcliffe, Cherry Jones and Bobby Cannavale.

Farrell is back, and with “Girls Who Walked on Glass,” he has concocted an intriguing theatrical treat.

Under the direction of Neal Radice, the play offers us an immersive theater experience. The audience is divided into two groups, and after an initial scene, we are guided from room to room for each successive episode. While we are watching a scene, we can hear another scene playing simultaneously beyond the partition.

The result is a rare and special theatrical event reminiscent of Ivo van Hove’s 2014 staging of Ingmar Bergman’s “Scenes from a Marriage,” which also divided the audience into groups before sending them from room to room. Because each audience is very small, be sure to arrange tickets in advance. Serious theatergoers will not want to miss this exceptional event, which is still under development.

Todd Warfield has transformed the theater into a complicated network of performance spaces: a recording studio, a dining room, a comedy club, a bedroom, a patio, a restaurant. The performance space even extends back into the Alleyway dressing room area. 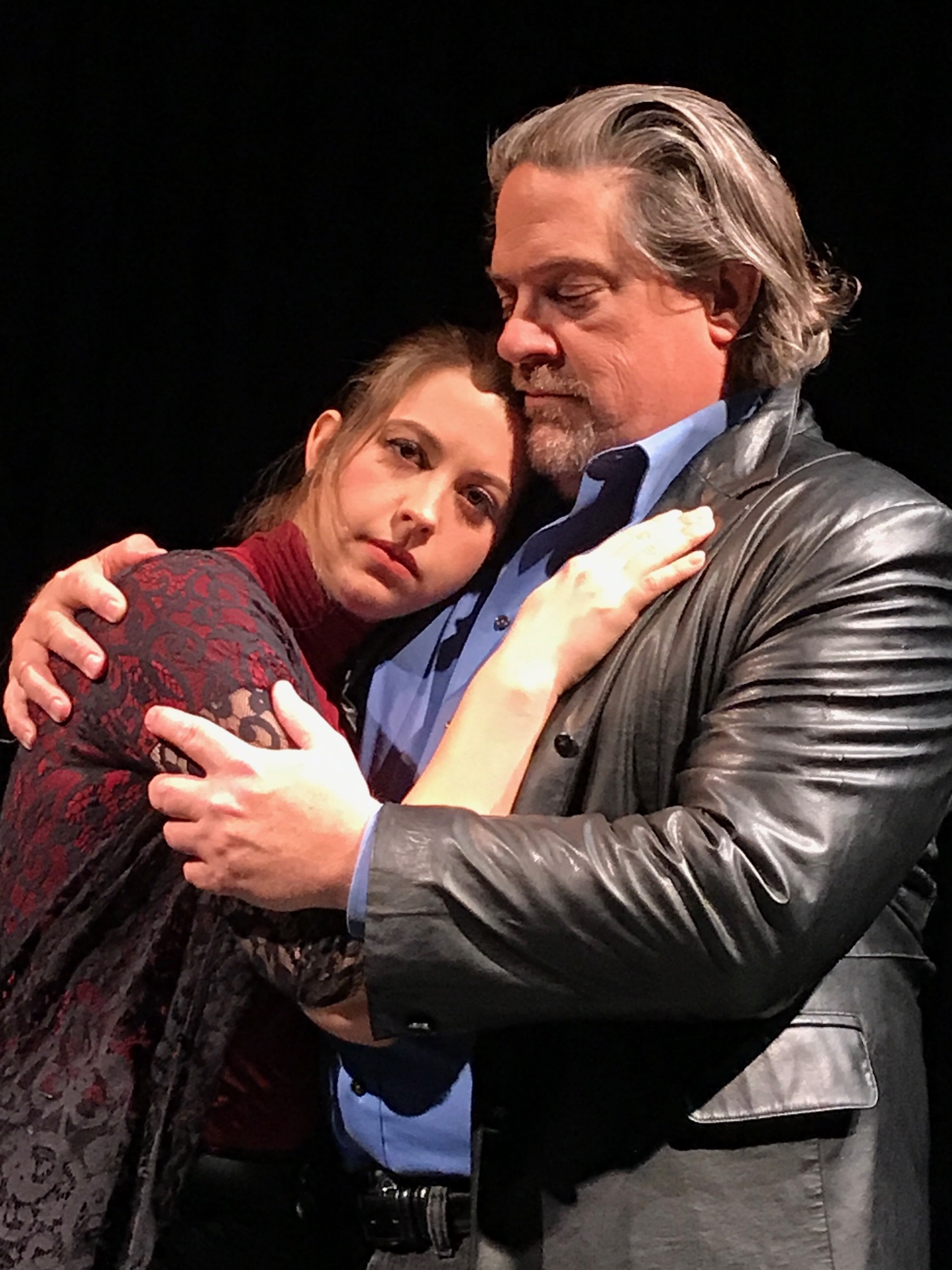 The story of Katrina (played by Emily Yancey) and recording studio owner Arturo (Daniel Greer) is one of three told in "Girls Who Walked on Glass."

The initial scene introduces us to Katrina, played by Emily Yancey, a college drop out looking for a job at a sketchy recording studio, run by Arturo, played by Daniel Greer. After the audience fills in the available space and furniture, the lights dim and Katrina boldly enters the darkened room. Playing the scene as if the audience does not exist, she bravely negotiates this arguably threatening situation and lands a job.

This moment sets the stage for the sequences that will follow.

The evening will split into three main narratives: Katrina at the recording studio; Bridget, a rich girl who becomes fascinated by an older man at a comedy club where she works; and Zoe, a troubled teenager sent to live with Lance, a friend of her father and his teenaged daughter Abby.

Sometimes we see scenes out of chronological order, which haunts us with a sort of narrative omniscience. We sometimes watch a scene, knowing what is going to happen to the characters.

Periodically, we hear monologues from women outside these three narratives. We meet Elizabeth (Niki Nowak) for whom being half of a couple simply does not work. We meet Amanda (Sandra Roberts) who escapes small town Pennsylvania by becoming a stripper – I mean to say “dancer.” We meet Raven (Lillian Reszel) who, after a childhood of sexual abuse, meets a man in college who is different from others she has known.

The acting is uniformly good, and at times excellent. Some of the newer talent is particularly impressive. Reszel gives a compelling and nuanced performance of Raven’s monologue about meeting a former member of Israeli intelligence who wants to borrow some shampoo. Sandra Roberts is excellent in a rather Shavian monologue that could have been lifted from “Mrs. Warren’s Profession” about how a woman can exploit her sexual attractiveness or be exploited for it. Gayle Petri’s portrayal of Abby, the daughter of a disturbingly complex man is also terrific.

The three women who serve as anchors to the evening, Yancey as Katrina, Ember Tate as Bridget, and Jamie Nablo as Zoe each create distinct and real individuals.

Greer provides a vivid portrayal of Arturo, a man who is alternately comforting and creepy. James Cichocki winningly transforms himself into cheerful, if reckless Mike D, a formerly successful comedian. Trevor Dugan gives an endearing performance as lovelorn Peter. John Panepinto is also very fine as Lance. Betsy Bittar does very fine work as a number of contrasting characters, even her suffering waitress is entertaining. Nowak brings the requisite clarity to Elizabeth.

As we navigate this maze of spaces and people, Farrell reminds us that every human being has a backstory. For many people, that story involves dark places and perseverance in the face of tragedy. We never really know the history of the person standing next to us.

"Girls Who Walked on Glass"

Presented by Alleyway Theatre, through June 22. Performances are at 7:30 p.m. Thursdays, Fridays and Saturdays. Tickets are $32 general admission, $16 for students/industry (alleyway.com, at the box office beginning 30 minutes before each performance). Call 852-2600.