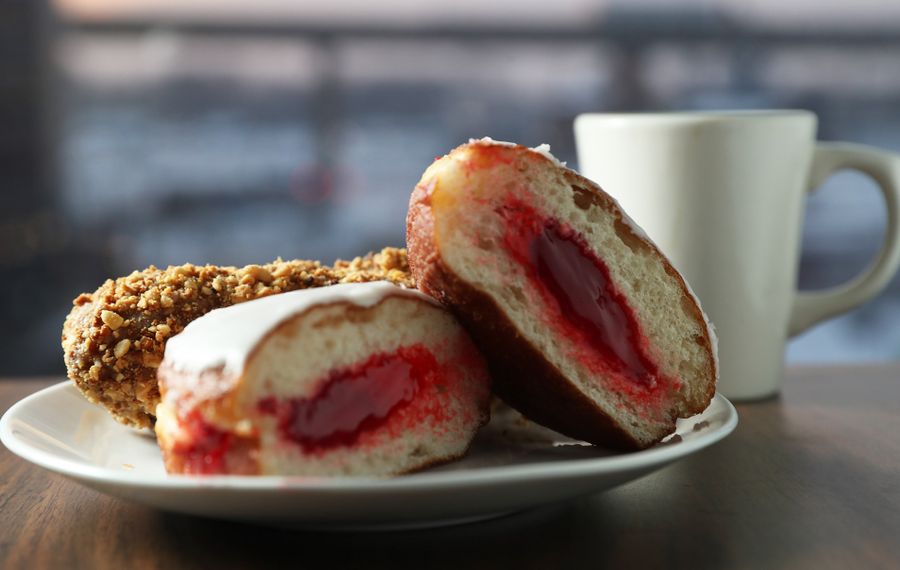 Now that National Day celebrations are part of Buffalo's lexicon, local businesses are better prepared for big food dates, like Friday's National Donut Day. (Even though our style spells it "doughnut," we'll sacrifice for this occasion).

National Donut Day is more than just discounted desserts, although those are plentiful. Chrusciki Bakery, Public Espresso and Tim Hortons, for example, are using the attention to release new products, while giveaways and a big-time raffle are part of the festivities at Peace, Love and Little Donuts.

There's even one National Donut Day event - a collaboration between Community Beer Works and vegan specialists Fry Baby - on the agenda.

What's new?: Public's doughnuts zoom off the counter by the cash register; customers typically arrive early to make sure the crullers, vegan specialties and wild assortment of flavors are still available.

Chef Luci Levere will make a triple-batch of doughnuts, roughly 200, for a much greater supply than usual. Additionally, Public will launch a foray into Grubhub, touting its four and six packs of its "doughnut babies," small, bright doughnuts for delivery.

Everything the light touches can fit in your belly. Monday is better with a cruller (or twelve). #publicespresso

The flavors - sour cream, turtle, lemon blueberry and apple cider - will be available, even for those who didn't win the daily giveaway, for $2 apiece or a half-dozen for $10. Chrusciki will also have Polish paczki available, too.

What's new?: On the heels of the chain's Camp Day, Tim Hortons' National Donut Day deal comes with a bit of mystery, as select locations will offer a limited-time churro doughnut, which is a honey cruller filled with caramel and topped with cinnamon sugar.

Even if the Tim Hortons near you doesn't carry the newcomer on Friday, the churro flavor will be available nationally on June 12.

What's the deal?: Fresh off celebrating its first anniversary on Transit, the purveyors of adorable, decorative delicacies have announced a four-fold deal for Donut Day. The discounts are simple - $1 coffees all day long, and a free coffee with the purchase of a dozen doughnuts, but the giveaways might be more alluring.

A party box - which includes 36 mini doughnuts - will be awarded to a social media contest winner on Friday morning, and the chance to win free doughnuts for a year (which equates to 12 dozen doughnuts) will be raffled off in-store.

What's happening?: Vegan dessert lovers are grateful Fry Baby decided to reopen after a long hiatus, and Community Beer Works is welcoming them to the West Side taproom to sell both doughnuts and contribute to the doughnut burger, a beef patty lodged between Fry Baby donuts ($11.50, or $10.50 for a beet burger), between 5 and 7 p.m.

Additional entertainment includes Grace Stumberg performing from 6 to 9 p.m. on the back patio, the start of a series for the brewery.

[Read more: Before there was Paula's, Tonawanda had Jet Doughnuts]

Eileen's Centerview Bakery, 465 Center Road, West Seneca. Deal: Instead of a dozen doughnuts for $8.99, Eileen's will give you a baker's dozen for the same price. That's technically one free doughnut with the purchase of 12.

Mazurek's Bakery, 543 South Park Ave. Deal: 20% off any doughnut purchase if you mention Donut Day Discount at the register.

Dunkin' Donuts, multiple locations. Deal: A free classic doughnut with the purchase of a beverage.

Did we miss a local deal? Email btsujimoto@buffnews.com.