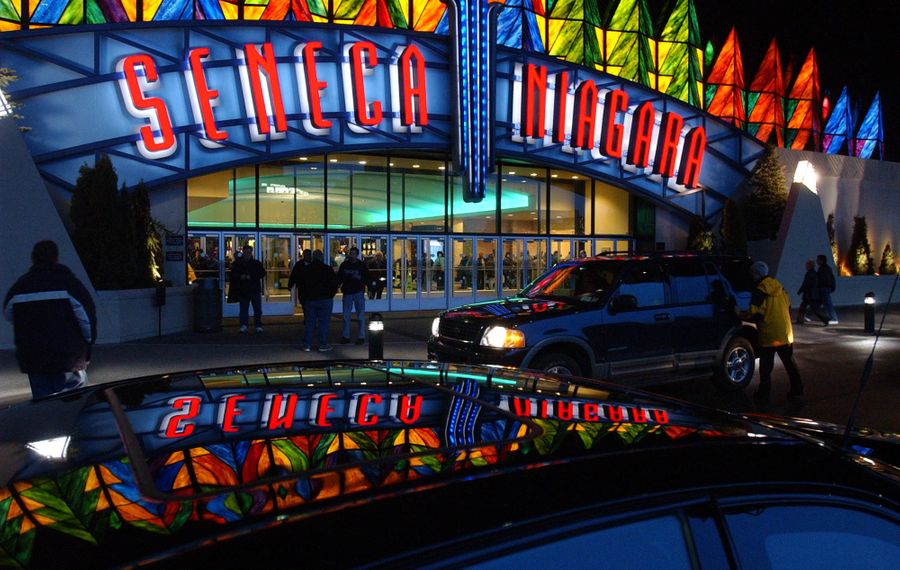 ALBANY – The casino revenue sharing dispute between the Seneca Nation and New York State took another twist Thursday with the Senecas asking a federal court to toss out a recent arbitration award that sided with the state.

After a request to review the impasse was turned down by the U.S. Department of Interior on Wednesday, the Western New York tribe asked a judge in Buffalo to vacate the arbitrators’ ruling that said the Seneca Nation owes $255 million in slot machine revenue payments to the state.

The Cuomo administration lashed out at the Senecas for continuing what it called a delaying maneuver to avoid complying with a legal arbitration award.

While the state technically includes the expected payments from the Seneca Nation in its $177 billion budget for the fiscal year that began April 1, localities in the Buffalo region who benefited from in the revenue stream are most directly affected by the ongoing legal dispute.

The tribe says that the arbitrators' award amounts to an illegal amendment to the 2002 compact that permitted the Senecas to exclusively operate casinos in a large area of Western New York in return for sharing 25 percent of slot revenues with the state. In court papers filed Thursday, the tribe maintains that the federal Interior Department would have to sign off on what the Senecas say was a material change in the terms of the original compact.

“You cannot simply skip past the fact that the arbitration decision and amendment must concur with federal law and, right now, the amendment and the law conflict with one another," Seneca President Rickey Armstrong Sr. said in a written statement Thursday.

The Seneca leader said the tribe is willing to negotiate a resolution with the state. “Unfortunately, unless the governor is willing to sit down with the Seneca Nation leadership to negotiate a mutually agreeable resolution that we could submit to the Department of Interior together, I am concerned that this litigation will continue for the foreseeable future, leaving the Seneca Nation and the local governments who benefit tremendously from our gaming operations in legal and financial limbo," he said.

The state shares 25 percent of its take from the Seneca casino operations with some local governments in Western New York that, in some cases, rely heavily on the revenue flow to balance their books.

“This is nothing more than another stall tactic from the Seneca Nation as they continue to move the goal posts to avoid paying their obligations under a process that they signed on to," said Jason Conwall, a Cuomo spokesman.

“The arbitration panel ruled in favor of the state months ago, and the Seneca Nation needs to start paying what’s owed to these local communities without any further delay," he added.

The current fiscal dispute began in early 2017, when the tribe said it had met the terms of the 2002 compact that, it said, required revenue sharing payments until the end of 2016. Since the compact began, the state received about $1.4 billion in Seneca casino proceeds.

The compact was automatically extended in December 2016 for another seven years. The tribe maintains that the compact’s actual wording is silent on any payments being required after the original 14 years of the deal. The state insists otherwise and notes the Senecas are still enjoying the lucrative benefits of the agreement’s provisions in which the state agreed not to locate any full-blown casinos west of state Route 14, from Lake Ontario on the north to the Pennsylvania line on the south.

The state in 2017 took the dispute to a three-member arbitration panel that, the compact states, has the authority to issue a binding order on the sides. The Senecas picked one member of the panel, the state had an appointment, and those two members chose a third member. That panel this year said the Senecas were wrong to halt the revenue-sharing payments, though it acknowledged there was some ambiguity in the compact’s wording.

The compact’s language states that one party – the state – could use the federal courts to get the Senecas to make the payments if the tribe did not follow the arbitrators’ ruling. It also states that the actual arbitration award is not subject to an appeal.

But the tribe sought a different route after losing the arbitration fight: the federal government.

Two months ago, the Senecas asked the Department of the Interior to review the arbitration decision because, the tribe said, the compact’s original terms had been changed. The federal government approved the 2002 compact.

But the Interior Department on Wednesday told the Senecas such a review could not be undertaken unless both the tribe and the Cuomo administration agreed to that path. It said the review request “lacks a certification" from the state, according to court filings Thursday by the Senecas.

The federal agency, in a letter written by Principal Deputy Assistant Secretary of Interior John Tahsuda, said that it regretted having to return the arbitration award without reviewing the matter, but that “we look forward to receiving a new submission" from the state and tribe.

In its filing, the Seneca Nation is asking the court to vacate the arbitration panel’s decision, which was issued in “manifest disregard” of federal law – the Indian Gaming Regulatory Act — which requires, the tribe’s lawyers state, review by the U.S. Secretary of the Interior. Alternatively, it is seeking a stay of that award until the Interior Department reviews the matter.

The court filing states that while the Seneca Nation “vigorously disagrees” with the arbitration award, it is not asking the federal court to rule on the panel’s decision. Rather, the tribe’s new legal focus is solely on the lack of a federal review of the arbitration award. Such a review is a “bedrock requirement” of the federal Indian gaming law.

“This action by the Department of Interior unfortunately fails to resolve the ongoing disagreement between the State of New York and the Seneca Nation. Without federal review, the amendment crafted by the arbitration panel remains unenforceable," Armstrong said.

The state and the Senecas could still negotiate a solution. The two sides could jointly ask for an Interior Department review, which seems unlikely. Or the new Seneca action could run its course. The state could also bring a separate legal action to try to force the Senecas to pay the revenue sharing money.