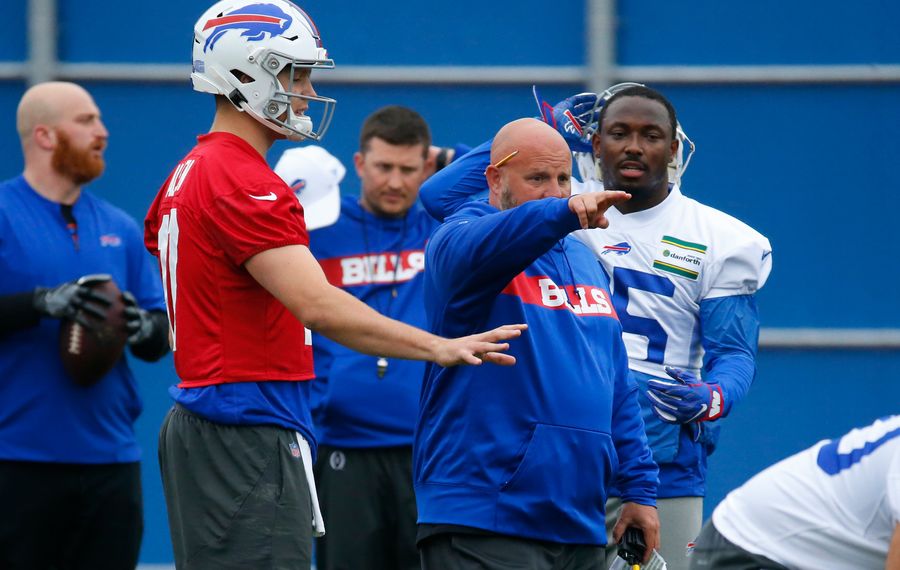 Jim Kubiak has been analyzing the play of the Buffalo Bills quarterbacks for BNBlitz.com. Kubiak is the all-time leading passer at Navy, has played in the NFL, NFL Europe and the Arena Football League, and has been a coach and executive in the AFL. He spent eight years as the radio analyst for the University at Buffalo and runs the Western New York Quarterback Academy to help develop the next generation of quarterbacks.

The 17-minute segment touched on Allen's grip on the football, his new situational mindset, his thought progressions from the huddle, the use of option routes, and his emphasis on “bottom up” read progressions.

The interview provides an opportunity to peer into the psychology of elite quarterback performance and the philosophical direction the Bills’ offensive staff is taking Allen heading into his second year.

Here are my key takeaways:

Every playoff contender needs to have a quarterback with the physical requirements to lead the team to success. They possess the size, power and strength to avoid the most dangerous athletes in the world and demonstrate the courage to stand tough in the fray of the pocket. These quarterbacks display arm strength, pinpoint accuracy and an uncanny sense of touch.

What is often lost in the discussion is their most important physical attribute, the consistency with which they achieve in their footwork.

Simms asked Allen why he adjusted his shotgun footwork midseason. Allen started the season with his footwork as right-foot-back, but then Allen returned to his collegiate footwork of left-foot-back after his injury.

It is worth nothing that Bills offensive coordinator Brian Daboll built his NFL career with the New England Patriots, and as such developed much of his philosophy from Tom Brady. Brady's shotgun footwork is right-foot-back.

Allen’s completion percentage was .862 (25 of 29) throwing to his left less than 10 yards and just .538 (14 of 26) in the same range to his right, according to Next Gen Stats. Statistically, this indicates a technical issue throwing the “quick passing game” to his right.

The quick passing game throws occur in less than 1.5 seconds from the snap, which makes it all but impossible for defensive linemen to get to the quarterback before the throw. The quick passing game is higher-efficiency passing and can be used to modify a struggling running game. It can also be used in conjunction with spread and empty formations to stretch the defense horizontally across the field.

"I would get here and be super open already. And getting the ball to the right especially was all arm and the ball basically died on me,” Allen said.

Simms said, "and what he means by open is if he is throwing here (chest) getting your shoulders too open.”

Many theories and philosophies exist on how to best improve efficiency in the quarterback. Allen references his personal comfort with left-foot-back as well as basic consistency of moving the same left foot every time and in every drop for the adjustment.

Playing fast and throwing “quick game” from the shotgun is the most difficult duty a quarterback is asked to do for a few reasons. First, the quarterback’s eyes must come off the defense in order to catch the snap. The second difficulty is having to catch and throw without the laces. This never happens while under center. Finally, and perhaps most importantly, the footwork required to maintain balance, power and consistency is unusually difficult and goes against the natural grain of a quarterback's rhythm.

Allen’s return to left-foot-back is a matter of comfort and consistency, but I would argue that being under center would solve the issue entirely and allow the young quarterback to always have his eyes on the defense, get the laces, and have his front shoulder on the target.

Tom Moore, the former offensive coordinator for the Colts, used to say: “Don’t fight the problem.”

Whether the quarterback begins the play from under center or from the shotgun, it is just a place where he starts. I suspect that Josh Allen will be under center more this season, and will be in the shotgun with his left-foot-back to improve consistency and completion percentage.

Allen’s attitude is positive and refreshing, perhaps a reason why so many Buffalo fans have taken to him. He is humble and honest, particularly in this interview, describing several instances he struggled last season. He is constantly searching and adjusting to improve his craft.

During the interview, Allen mentioned several mental focus points for this upcoming season.

“I think it is more of a different mindset now, trying to understand each situation, be more on top of that aspect.”

This small statement is significant. This makes every down and every throw have meaning in the context of its situation. There are no ordinary third-and-2 plays in any given game. Every play called is done so in the context of what is needed in that situation.

Philosophies develop in situational football. Often these philosophies depend and change according to circumstance, time remaining, timeouts available, injuries incurred and personnel in the game. These philosophies create understandings and new habits that players use. Daboll is teaching Allen what matters most in every situation and how to attack, within this structure of beliefs.

Simms asked, “What are some of your coaching points going through your mind as you break the huddle?”

Allen’s response gives a clear account of this new emphasis: “First thing in my mind is situation. Is it 1st-10, 2nd-long, whatever it is? My thoughts depend on that type of situation. We’ve been doing a lot of different studies, Coach Daboll’s been doing a really good job of getting my mind situated for those types of things. So, situation, then I go straight to the safeties. Is it one high or two high? Then I get my eyes to the front protection wise. ... Do I need to throw hot, re-mike, lock this guy over there and make sure we are good on this end?"

There is so much to do mentally in a short period of time at the line of scrimmage. Experience, consistency of system and great mental preparation all make a difference in improving these critical moments. "Pre-snap” proficiency is solely based on a player's ability to cognitively recognize, recall and think their way out of negative plays.

Another addition to the Bills’ growing offensive philosophies is the use of option routes.

These types of routes have been around for a long time. The advantage of routes that have two or three options off them is to allow the receiver to attack the weakness of the defense every time.

For example, consider a slot receiver running an option route whereby he has the ability to “sit” in a hole versus a zone coverage. The same route also has the “option” to break out or in, depending on the leverage of the man-to-man defender. This is genius, but only if you have dependable, smart receivers who can read and react to what is happening in real time.

Additionally, for option routes to be successful, the quarterback needs to see and react to the defense simultaneously with the receiver. It takes coordination, discipline and ultimately timing to be successful using this type of concept.

Allen indicated that there has been an increased use of option route strategy by the Bills’ slots and tight ends. Daboll recognizes their value and must believe that he is ready to read and react to what is happening in real time.

The most important philosophical change that will improve Allen’s production is “bottom-up” reads. This process of progression reading is contrary to how most offensive strategies are taught in high school and college. Those require the quarterback to read the passing progressions from deep to short, meaning they want big plays first.

The problem with the concept is twofold. First, you are training quarterbacks to attack deep all the time. A quarterback wants these big plays and will often attempt these throws even when they are not open. Coaches must be careful not to train greed. Secondly, complementary routes can actually run out of space, or be in the wrong place by the time the decision is made. This prevents the complementary routes from being as effective had they been thrown on time.

My first encounter with the “bottom-up” read philosophy was in training camp with the Colts. Moore preached the short-to-deep mindset. The progressions started with the shortest routes first, attacking open areas immediately unless they were covered. If they were covered, Manning and the other quarterbacks would progress to deeper complementary routes.

Allen mentioned that he needed to "get his mind situated for those types of things" when talking about the philosophy. Making physical adjustments is only part of the formula. It is not only the footwork and ability to throw the football that improves efficiency and accuracy, but the willingness to philosophically adjust. This takes maturity, understanding, preparation and the relevant data to illustrate exactly why philosophies are being employed.

Take, for example, the idea that winning the “turnover battle” ultimately is the most important factor to winning football games. Data demonstrates that teams that were able to protect the ball better than their opponents won the game 80 to 90% of the time, regardless of any other factors. This type of valuable data is likely the kind that Daboll is presenting to Allen in order to change his philosophy on how to play the NFL game. He is teaching Allen how to distribute the football, when to throw it away and when to run. He is building a case for short completions in a “bottom-up” philosophy and how these plays make a huge difference in sustaining drives and scoring points. Studies on ball security, completion percentage and footwork can provide a clear road map for a players’ success.

In a very subtle way, the Simms interview uncovered the depth of thought coming out of One Bills Drive. These new thoughts have altered Allen’s philosophies, and these philosophies, backed by Daboll’s data, might bring the Bills one step closer to their goals.