It wasn’t until I tried to explain the appeal of Frank Gourmet Hot Dogs to a retirement-age friend that I realized what the little Kenmore restaurant is up against.

I had just finished extolling the virtues of a delightful handful of adventure called the Violet Beauregarde, which tops a custom-made frank with spicy blueberry barbecue sauce and frizzled shoestring onion curls. Sounds interesting, they acknowledged. How much?

“About six bucks,” I said. They recoiled as if I had proposed setting their beagle on fire. “For a hot dog?” Well, yes.

The basic dog is a dollar or two more than basic grilled dogs elsewhere. For a reason: it’s not a basic dog. It’s made from better meat: locally raised heritage pork and grass-fed beef. It’s not made with corn syrup, preservatives or fillers. Frank isn’t a one-trick pony, either: specialty sandwiches, outstanding house-cut fries and some of the best crusty, griddled smashburgers in town. 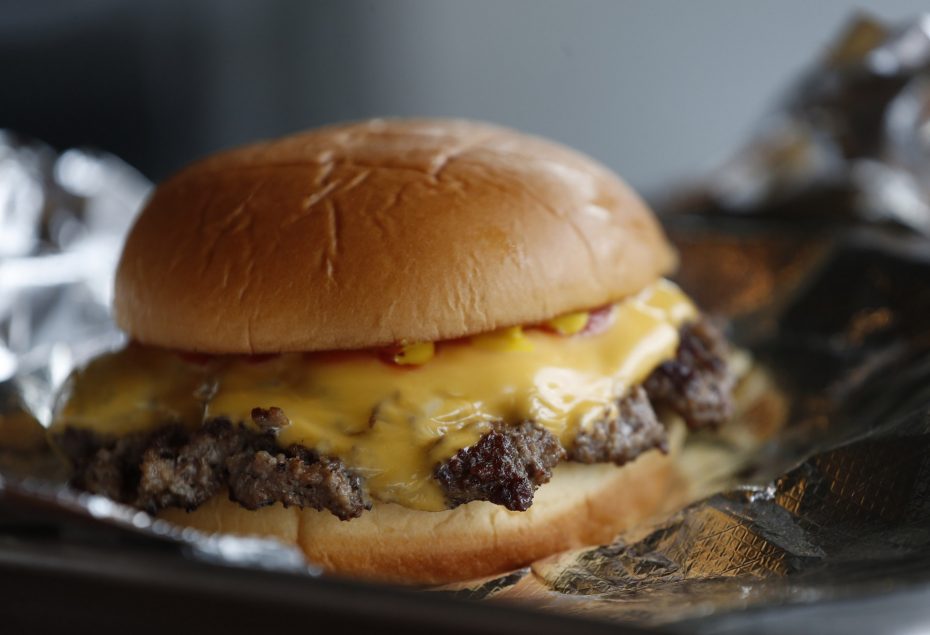 Here’s the crazy thing about Frank: as much as I dig its dogs, they might not be the most remarkable dishes they sell.

I’ll get to those in a minute, but first take a moment to appreciate how this happened. Frank Gourmet Hot Dogs is a brother act. Frank and Paul Tripi started a hot dog truck in 2013, determined to craft and sell a better wiener. Their creative dogs and killer fries won them a following, which now finds them in a tidy counter-service space fashioned from an auto repair garage.

So here’s the reasons you should visit.

First, the fries. Cut fresh daily, in regular ($3.39/$4.49) and sweet potato ($4.99), they are reliably crispy, with the corner shreds left in for tasty crumbs. Dips (salt and vinegar aioli, dijonnaise, dill pickle aioli) are another 79 cents. The sweets can get the usual cinnamon honey-butter melting down through it, or a savory spin of garlic-cilantro-lime, which is worthy in its own right. 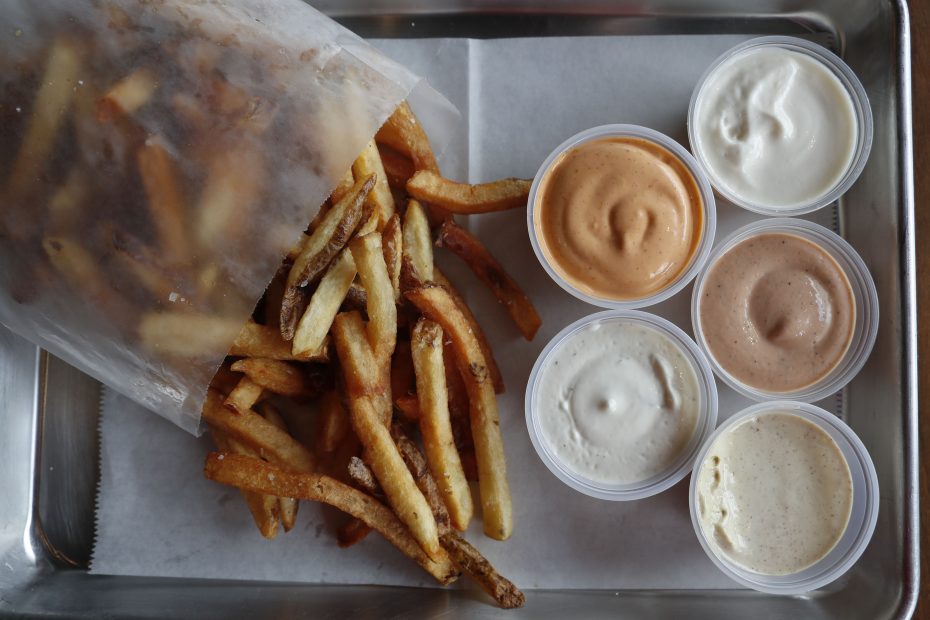 Second: the specials. At Frank, those are full-effort sandwiches and soups, many credited to Brenden Haggerty, former chef-owner of the Whole Hog truck, on the Frank roster for extra culinary firepower.

In recent months, winning sandwiches have included a house-made pastrami with deli brown mustard on rye ($12.95) whose smoky richness made my eyes roll in pleasure, and a two-handed mojo pork hoagie ($10), shoulder roasted until the sweetness came out, with caramelized onions and a basil-orange mayonnaise. 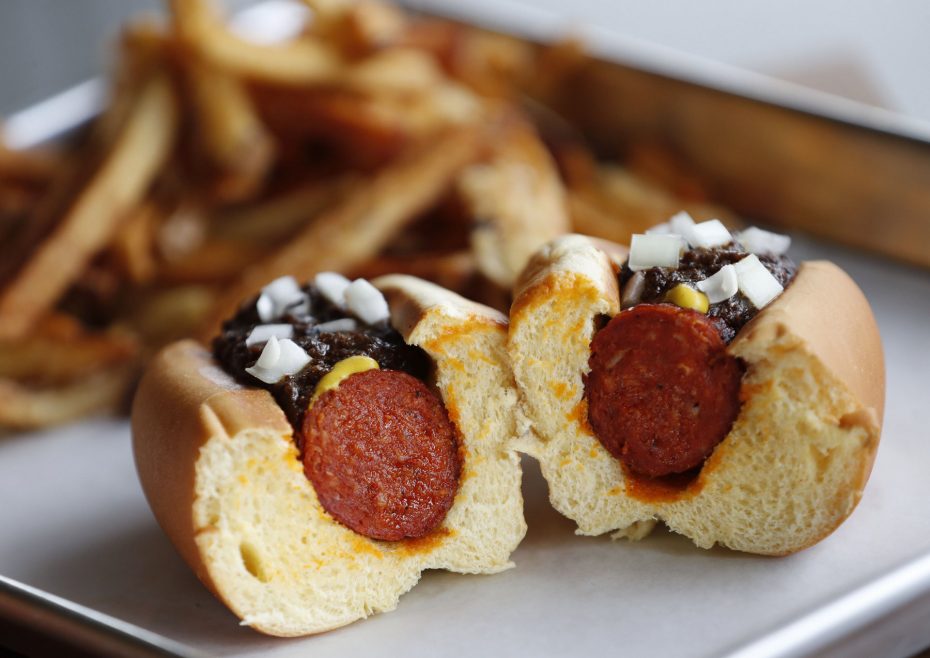 No one but Frank Gourmet Hot Dogs has the half-smoke, a slightly spicy sausage that's half pork, half beef and all tasty. It's topped with all-beef chili, yellow mustard and onions. (Sharon Cantillon/Buffalo News)

Third: burgers. Frank uses locally raised grass-fed beef, which delivers a more pronounced beef profile, especially cooked smashburger style. This entails squishing the ground meat down on the griddle and waiting until it develops a bronzed crust before flipping it. 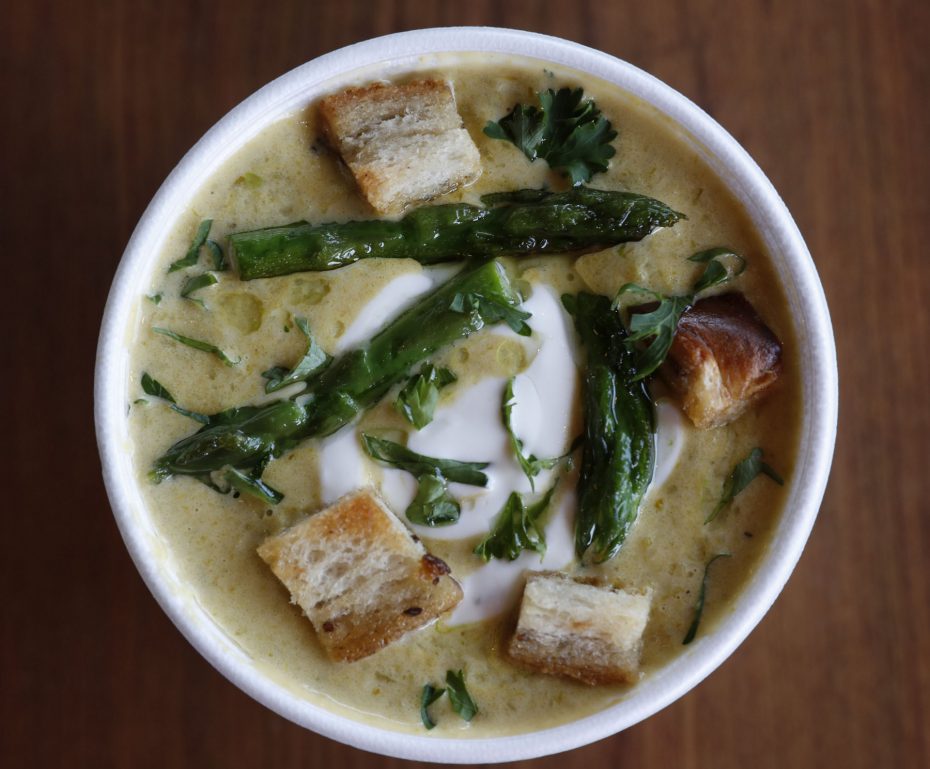 That comes on a pillowy Martin potato roll as a hamburger ($5.39), cheeseburger ($5.99) or fried onion cheeseburger ($5.49), wherein the meat is squished down onto shaved onions and cooked right into the patty. Whichever way you roll, this is a superior sub-$6 burger.

Fourth: the half-smoke. Once only found in the environs of Washington, D.C., the Tripis have worked with a butcher named Stachowski to bring this exuberant tube meat experience to Buffalo. The half-smoke ($6.99) is a coarse beef-and-pork sausage, spicy with chile, staining the bun orange with its paprika grease. Topped with mustard, beef chili and chopped onions, it’s a fistful of fun. 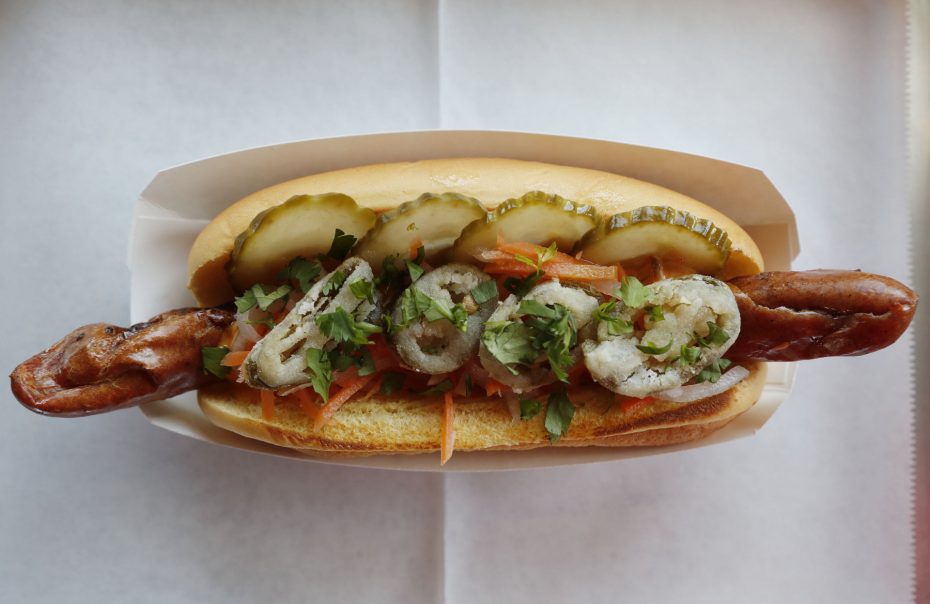 Vegetarian options include a decently tasty vegetarian burger ($7.49) with black beans and corn. I was not keen on the mushy vegetarian chili dog ($5.89), of lentils, vegetables and rice, topped with sweet potato chili. 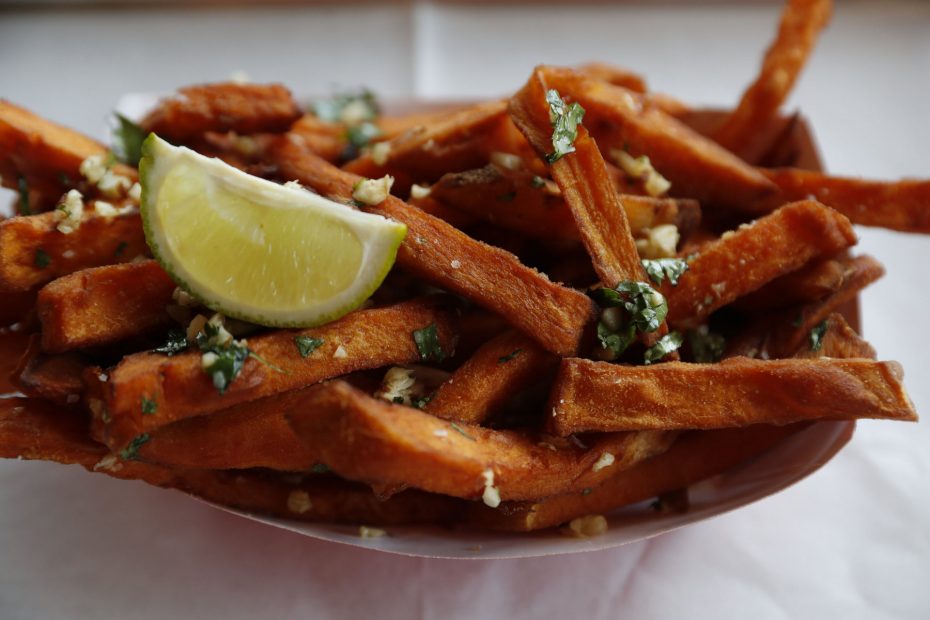 Beverages include fountain soft drinks, and a selection of canned and bottled craft beer.

There are people who believe that certain things should not cost more than the cheapest version. I get it. But some of the bleating I’ve heard about Frank prices remind me of the old saw about faculty politics: they’re so vicious because the stakes are so small. If you can’t see yourself spending a dollar more than you have to for a hot dog, that’s entirely your business.

Note surely, though, that that dollar can get you the difference between mass-produced and craft level. There will always be a place for Labatt Blue and Budweiser. At Frank, enjoy yourself a fresh serving of craft, in a bun.

Gluten-free options: entire menu can be, with gluten-free buns.