ALBANY – Gov. Andrew M. Cuomo has not called for any direct marijuana legalization talks with the two houses of the Legislature since March, the State Senate sponsor of the measure said Wednesday.

Asked in an interview what that indicated to her, Krueger said: “That he doesn’t want this to happen."

“We have had multiple meetings with the houses – including one this morning on legislative bills for the end of session, including cannabis. Members do not attend meetings on legislative proposals, but – as long as we’re talking about engagement – we suggest members engage with their staffs," said Richard Azzopardi, a senior adviser to Cuomo.

The governor recently put out his top 10 priorities to get passed before lawmakers go home June 19; marijuana legalization was on the list.

The comments from the senior lawmaker, who chairs the Senate Finance Committee, comes after a week or so of public chiding from Cuomo. He has taken to public radio airwaves recently to say the issue is dying because not enough of Krueger’s fellow Democrats in the State Senate support the measure.

Lawmakers have returned Cuomo’s serves to insist he could use his bully pulpit if he wanted – as he has before – to get a stalled measure moving again.

The marijuana bill is among several major ones that are appearing to worsen already strained relations between Democrat Cuomo and the Democrats who took control of the State Senate in January after decades of GOP dominance.

The internecine spate is such that some lawmakers are suggesting Cuomo wants the issue of marijuana – especially popular with the Democratic Party’s liberal base in New York – but doesn’t really want a full-steam marijuana legalization effort like California or Colorado.

Cuomo proposed, and lawmakers have amended on some key points, an overall plan legalizing the cultivation, distribution, sale and consumption of marijuana.

Advocates and opponents rallied and met with lawmakers at the Capitol Wednesday with the legislative session set to end in two weeks.

“We hope we can move it, but truth be told, we need the governor," Krueger told a cheering gathering of supporters on the Capitol’s fourth floor. She told them: “It would be amazing if the governor would come to the table on this and we could get this done before we go home."

But Krueger, signaling potential defeat, openly talked about bringing the issue back to life in December, when she suggested the Legislature could return to deal with issues involving public financing of campaigns. 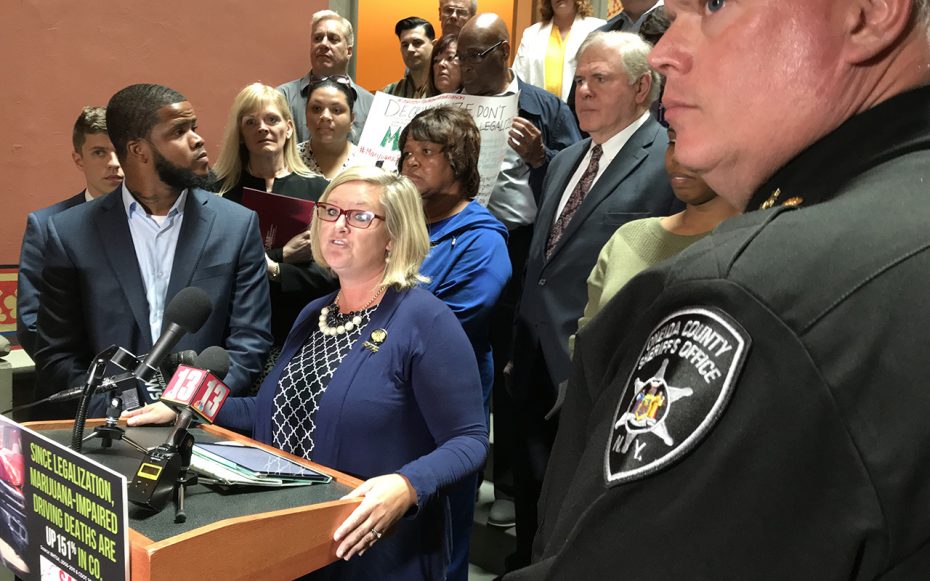 Opponents of marijuana legalization, including law enforcement and health and education officials, hold a press conference outside the Assembly chamber on Wednesday, June 5, 2019. (Tom Precious/Buffalo News)

A floor below, opponents from a cross section of interests, pressed to keep the marijuana bill from gaining any momentum in the final weeks of the session.

“I think the irony is that we’re talking about legalizing marijuana at the same time we’re battling an epidemic on opioids," said Daniel Stapleton, the public health director of Niagara County and president of the statewide association of public health commissioners.

Stapleton checked off experiences in other states that have legalized marijuana: higher traffic accident rates with people who consume marijuana; more visits to emergency rooms; and increased calls to poison control centers.

“We believe no amount of marijuana is safe to inhale," Stapleton said in an interview. “It’s not healthy so we can’t support something that contradicts the reasons that public health departments exist, which is to protect the health of our communities that we serve, and especially children."

In an earlier news conference outside the Assembly chamber, Stapleton was joined by a county sheriff, an addiction treatment representative, a school superintendent and others seeking to stop the marijuana legalization effort.

“As a mom, I can’t fathom why we are still having this conversation," said Kyle Belokopitsky, executive director at the New York State PTA.

“The one staggering number that I can't get over … since marijuana was legalized in the state of Colorado is the amount of people who have died in car crashes directly related to marijuana," said Robert Maciol, the Oneida County sheriff and president of the statewide sheriffs association. A study from Highway Loss Data Institute published in 2017 found that the legalization of retail marijuana sales was correlated with increases in collision claim frequency

Besides health and safety concerns, opponents say the legalization effort is being fueled from not far behind the scenes by big marijuana companies funded by Wall Street interests.

But Jeremy Saunders, co-director of the activist group VOCAL-NY, said opponents are employing “reefer madness type arguments” to kill the legalization effort. “What they’re saying about marijuana defies all the science," he said.

Like Krueger, Saunders and other pro-legalization advocates believe Cuomo’s heart is not really in seeing the measure get passed this month. He said many legalization opponents also declare they could support an effort to further decriminalize marijuana possession that would no longer lead to criminal records.

“There’s been well over a decade of efforts to decriminalize marijuana. They’ve never supported it," he said of the legalization opposition groups.