Lake Ontario is open for business. Yes, the lake level established a new all-time high water mark this week for as long as they’ve kept records. Yes, landowners and businesses are struggling with the record-high water, experiencing another round of shoreline destruction.

“The only issue I had with the high water was that I had to move from Wilson to Olcott because a private dock I was supposed to stay at was under water,” said Matt LeClair of Plattsburgh with the Oh Baby/Irish Knots team. Other angling considerations included the “no wake” zone within 1,000 feet of the shoreline and floating debris that could pose a problem if you weren’t paying attention while motoring. The fishing, though, was better than good.

As the event began May 31 out of the ports of Wilson and Olcott, the air was filled with excitement. The weather was near perfect, which has been unusual this spring. When all the salmon and trout were weighed in at Krull Park in Olcott, the standings were close after two days of fishing. The back-to-back days of decent weather was even more unusual. The late Walter “Skip” Hartman could have been watching over the competition this year as his daughter Penny Lyman ran the show. Other family members helped run the tournament or participated in it.

Oh Baby/Irish Knots, a team lead by LeClair, took top honors in the Professional Division with a score of 514.09 points for two days of fishing (based on 10 points per fish and a point per pound). They won a check for $11,000. The Streaker team, led by Matt Dunn of Newfane, setting the pace in the Amateur Class with 265.56 points and earning a check for $2,000.

For the 2019 Pro category, the team of LeClair, Capt. Chris Yard of Pompey (Irish Knots), and Matt and Sarah Hill of Sherbourne came in with a tournament limit of 12 fish both days of the contest. However, 20 other teams came in with a tournament limit, too, each day. The key would be the bigger fish. After the first day, LeClair and company were in sixth place with a score of 246.17 points. Leading the way was Vision Quest and Capt. Pete Alex of Erie, Pa., with a score of 268.22 points. Big fish for the day in the Pros was a 21.22-pound king salmon caught by Capt. Jerry Felluca of Hilton and Runnin’ Rebel/Legacy.

“Matt and Sarah Hill did a fantastic job on the rods,” LeClair said after the contest. “Between my broken leg and Yard’s bad back, the husband-wife duo was instrumental in us winning the tournament.” All of their big kings were caught deep off the Niagara Bar using Hillbilly meat rigs and custom blue Weenie flies. 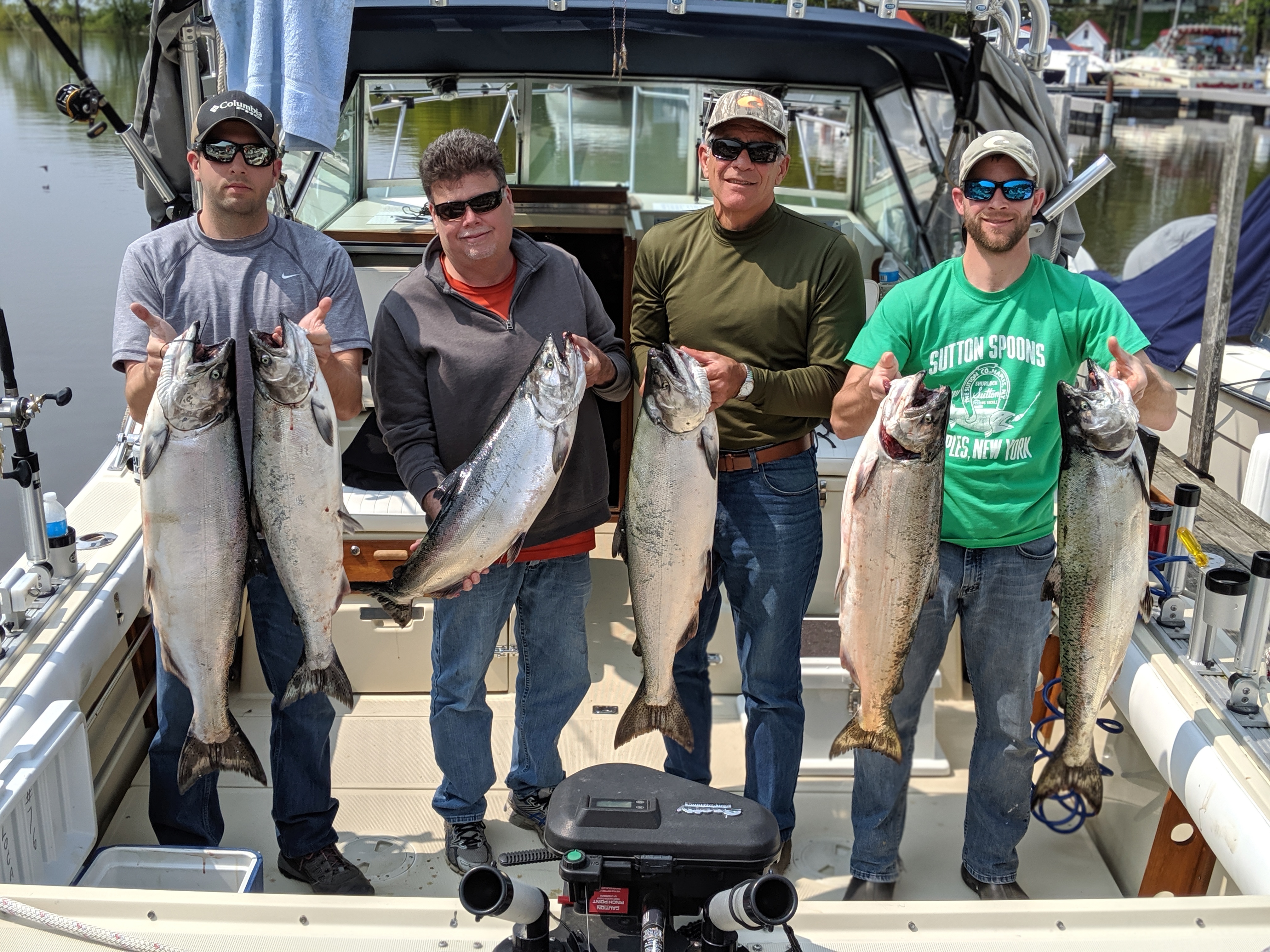 The Streaker team won the Amateur Division of the Niagara Pro-Am tournament held May 31 and June 1. The team consisted of two father-son duos. From left, Doug Parker Jr. of Wilson, Doug Parker Sr. of Lockport, Marc Dunn of Pendleton and Matt Dunn of Newfane. (Photo by Matt Dunn)

In the Amateur Division, the Streaker team didn’t have an easy time. All 19 amateur teams caught the five-fish limit for the tournament on the first day, 17 teams on the second day. However, the winners had two father-son duos working together for a common goal. Matt Dunn was fishing with his father Marc (of Pendleton) and Doug Parker Jr. of Wilson had his father Doug Sr. from Lockport on board.

“Having the father and son action going for us made it really special,” said Matt Dunn. “Our dads did great, too!"

Maybe it was an early Father’s Day present.

Streaker was in second place after the first day with 130.84 points behind Fishin’ Physician Assistant and Robert DeBadts with 137.46 points. However, the Dunns and Parkers went back to the same spot they caught big fish on Day 1, and they connected with them early. They brought in a slightly bigger catch to take the top spot.

“Spin Doctors with N and D cut bait, as well as spoons helped pull fish,” said Dunn. “No one particular color or set up stood out, only that the fish came from deep in the lake – up to 140 feet down over 300 to 350 feet of water.”

Big fish day one in the Amateur Class was the Fishin’ Physician Assistant team with a 21.67-pound king salmon. The second-day winner was Adam Austin of Gasport with a 21.31-pound king. Both earned $250 for their big fish titles.

Yes, the fishing on Lake Ontario is very good once again. Last year, there was a record catch rate for Chinook salmon as well as for the combined three-fish aggregate involving Chinook and Coho salmon, brown trout and steelhead. Lake action picked up where the lake left off last fall.

Don’t let the high water keep you away from enjoying one of the finest freshwater fisheries in the Great Lakes, if not the country.