Two days remain until the close of registration for the Southtowns Walleye Association’s Derby, set for June 8-16 on Lake Erie. Sign up at the club meeting Thursday in Hamburg or the clubhouse on Friday. There will be more than $100,000 in cash and prizes up for grabs. Check out details at www.southtownswalleye.com.

Scott Feltrinelli of Ontario Fly Outfitters reports that smallmouth bass are really heating up on the Erie tributaries. White streamer flies were working well on a 5-weight fly rod. There has been good reports from Barcelona for walleye, according to Skip Bianco at Hogan’s Hut. Focus your attention 2 miles east of the harbor in 30 feet of water with harnesses and stickbaits. According to Craig Sleeman of Victor, who has been pre-fishing some of the bigger walleye contests, bottom bouncing out of Buffalo has been good in 20 to 40 feet of water. Out of Dunkirk, it’s been pretty much the same with limit catches being taken on crankbaits and crawlers. Bass action has been fair to good for live bait fishermen, and tube jiggers and swim bait junkies have been hauling in fish up to 7 pounds.  Don’t forget the Teach-Me-To-Fish event Saturday at Tifft Nature Preserve, Fuhrmann Blvd., Buffalo, from 9:30 a.m. to 1 p.m. The event is sponsored by the Erie County Federation of Sportsmen’s Clubs and DEC. Contact Mike Todd at 851-7200 for more information.

In the lower Niagara River, smallmouth bass have been dominating the catch, according to Lisa Drabczyk with Creek Road Bait and Tackle. Tube jigs and swim baits are the way to go.  Capt. Chris Cinelli of Grand Island caught another tagged bass in the lower river. The fish was tagged last fall in the Canadian Tire Lake Erie Open run out of the Upper Niagara River. So far this year, seven fish have been caught, including Cinelli’s, reeled in by Bob Mrkall of Amherst last week. It was Cinelli’s seventh tagged fish caught out of his boat the last couple of years. Rage Swimmer and the 4-inch KVD Swim-N-Shiner have been the hot baits for smallmouth bass for Capt. Frank Campbell of Niagara Region Charters. Walleye are being caught at Lewiston Landing at night, but action is slowing, according to Drabczyk. If you want to give it a try, use jigs, ribbed plastics and live bait. Some steelhead are still in Devil’s Hole. Use live bait if fishing from a boat. Shore casters are using beads, spinners, spoons and sacs if you can find some dry land from which to cast. Bass is the top target in the upper river, too. Some walleye are being caught off Broderick Park. Musky season opens June 15 in the Great Lakes. 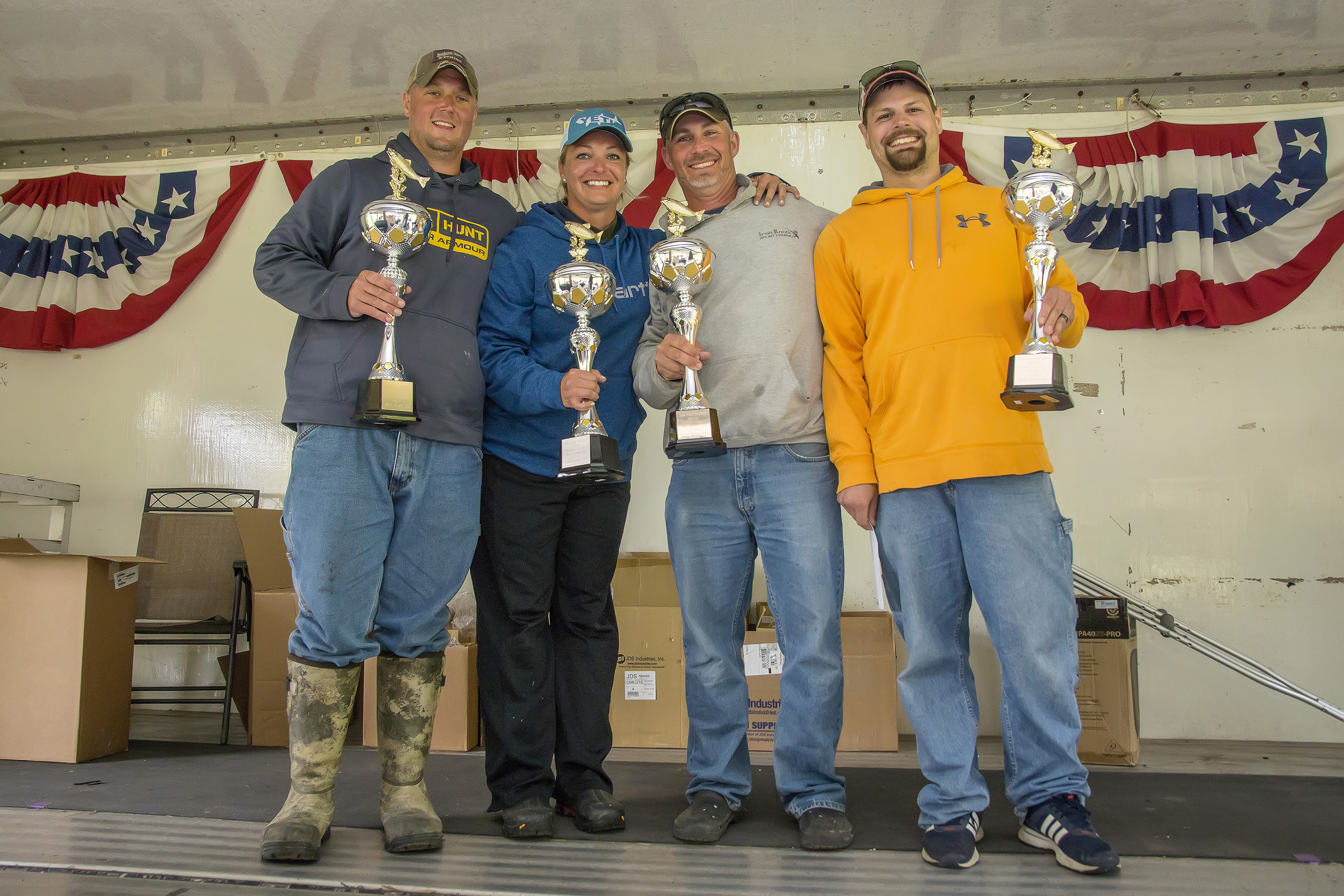 The Oh Baby/Irish Knots squad won their first ever Niagara Pro-Am Tournament May 31 and June 1. High water forced them from a private dock in Wilson to the Town of Newfane Marina due to high water levels. However, it didn't affect the fishing. (Wayne Peters photo)

Fishing continues to be great for salmon on the lake, as evidenced by the catches in last weekend’s Pro-Am Tournament out of Niagara County and the Buffalo Sabres Alumni Fishing Contest last Wednesday. Check out Catches of the Week. The winning pro team of Oh Baby/Irish Knots, led by Matt LeClair of Plattsburgh, fished deep off the Niagara Bar for both days of the tournament. Day one had a good spoon bite with a mixture of Yeck and Warrior lures taking the majority of the fish. They also picked up 4 big kings on Big Weenie meat rigs and Familiar Bite cut bait. On day two, they went with a combination of meat and flies, trying to capitalize on the morning bite with bigger Kings, and it paid off. They were never able to get more than four rods in the water until they had 10 fish in the cooler. The Amateur Division winner was Streaker, led by Matt Dunn of Newfane, and they focused on the waters off Olcott. Again, the salmon came from down deep. They used downriggers and divers to get baits 140 feet below the surface over 300 to 350 feet of water. Spoons and N & D cut bait worked best for their presentations. The divers were set 350 feet back on No. 1 setting. Everything wasn’t deep though. Some of the bigger kings came on free-floating sliders off the riggers. John Van Hoff, not fishing the tournament, also did very well on the Niagara Bar, but closer to the ledge. Cut bait off the riggers 100 to 120 feet down over 120 to 180 feet of water was best. On the divers, they were set at No. 1 and were 270 feet back. Spoons or flasher/fly worked best. They caught more than 50 kings, including many 20-pound class fish, over the course of two days. If launching a boat at Fort Niagara or Wilson-Tuscarora state parks, bring boots. You won’t need them if you are launching out of the Town of Newfane Marina in Olcott … yet. Catch of the week could be Dave Petersen from Pennsylvania aboard the Hotline out of Olcott. They hooked – and reeled in – a 12-foot dock in the lake. However, they couldn’t get it in the net. Be careful out there.

The walleye bite is still good when you can get out, according to Capt. Mike Sperry of Chautauqua Reel Outdoors. Worm harnesses slow-trolled on the weed lines from 8 to 12 feet is best. There have been a few good-sized walleye coming out of the north end of the lake, according to Skip Bianco at Hogan’s Hut. The south end fishing has slowed for walleye due to herbicide spray, but some fish have been caught in 14 to 18 feet of water. Calico and bass fishing have been just fair. The cold conditions have made for slower fishing. There have been good numbers of perch being caught, sizing from small to medium. Blue gill fishing has been great. Mayville has been the hot spot.