Pete Niland's first true epiphany about the way D-Day transformed his life arrived long before the calls from historians or reporters that are now almost routine at his North Tonawanda home, and long before the movie that shifted a family’s grief into American legend.

Almost 50 years ago, just out of college, Pete was roaming through Europe with a childhood buddy when he kept a promise to his father. Before Pete left home, he told Edward Niland that he would put flowers on the graves of two of Ed’s brothers at the American military cemetery in Normandy.

The brothers were Pete's uncles, and the tale of their deaths amid the D-Day invasion was passed on in fragments as Pete grew up, heartbreak rarely shared in its entirety. Instead, he learned bit by bit within a Tonawanda family that kept its sorrow to itself.

At the cemetery, the superintendent said there was no need to buy flowers. Touched by Pete's mission, the guy picked two dozen roses from a garden, then led the young men through a sea of 9,300 white crosses and Stars of David.

Within that grid, they found the graves of Robert J. Niland and Preston T. Niland, side by side. When Pete's grandparents were offered the chance after World War II to bury their sons at Normandy, their one stipulation was keeping the brothers together.

Pete is actually named for Preston, an uncle who was especially close to Pete's dad. Far from home, above those roses, the scope of what his family lost washed across him. 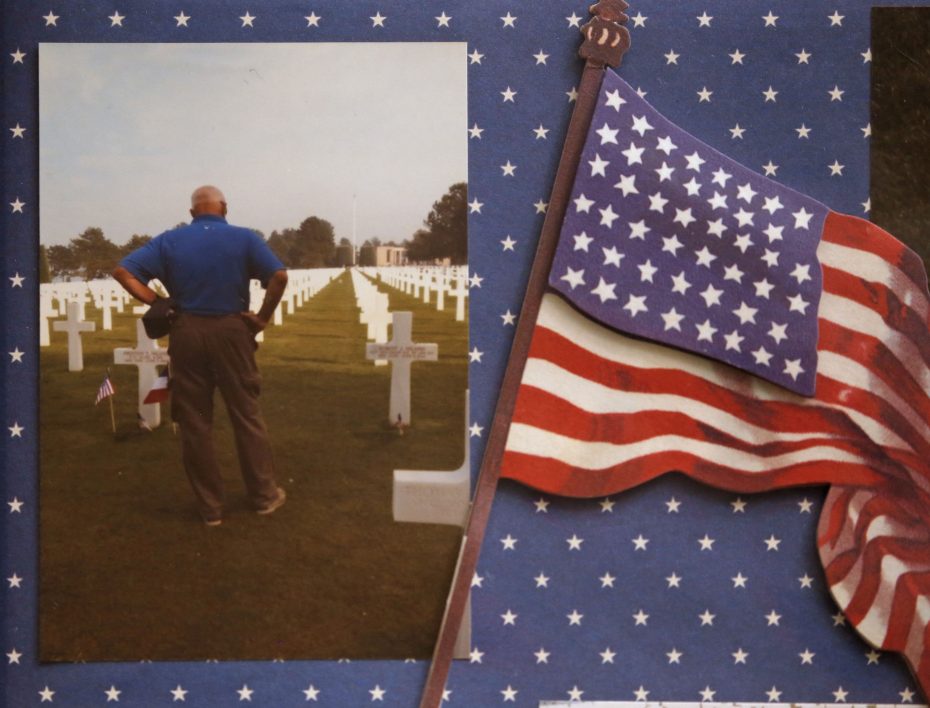 Pete Niland at the graves of his uncles in Normandy, 2014. (Robert Kirkham/Buffalo News)

Thursday is the 75th anniversary of the D-Day invasion that helped free western Europe from Nazi occupation. Once little known outside their own community, the Niland brothers are now an international example of how Normandy serves as a lasting statement on liberty.

For Pete's family, everything changed in 1998, when director Steven Spielberg’s “Saving Private Ryan” achieved global acclaim. The film depicts an intimate military quest to save a soldier whose two brothers die in action on D-Day, after another brother is killed in the Pacific.

Spielberg emphasized his narrative was a montage of true stories and creative fiction. While the last surviving Niland brother died in the early 1980s, the core inspiration remained obvious, the reason many relatives were invited to the film's premiere.

Their family provided a model for the film. In real life, Bobby and Preston Niland died in action on the first two days of the invasion, at a time when radio operator Ed Niland – Pete’s father – was listed as missing after his plane went down in Burma. A fourth brother, Fritz, was sent home from Normandy to spare the family more heartbreak, over his objections.

In that sense, Fritz was Private Ryan. Today, due to the movie, the graves of Pete and Bobby are among the most visited at Normandy. Cemetery superintendent Scott Desjardins said his staff routinely shifts the point from which visitors can view the names to protect nearby grass and soil from the tramp of feet.

Pete, a retiree from housing services at the University at Buffalo, is often reminded of how it is no stretch to say that four brothers from Tonawanda - remembered by a monument in their hometown that also pays tribute to Skip Muck, a close friend who died near Bastogne – now stand alongside Allied generals as enduring symbols of D-Day. 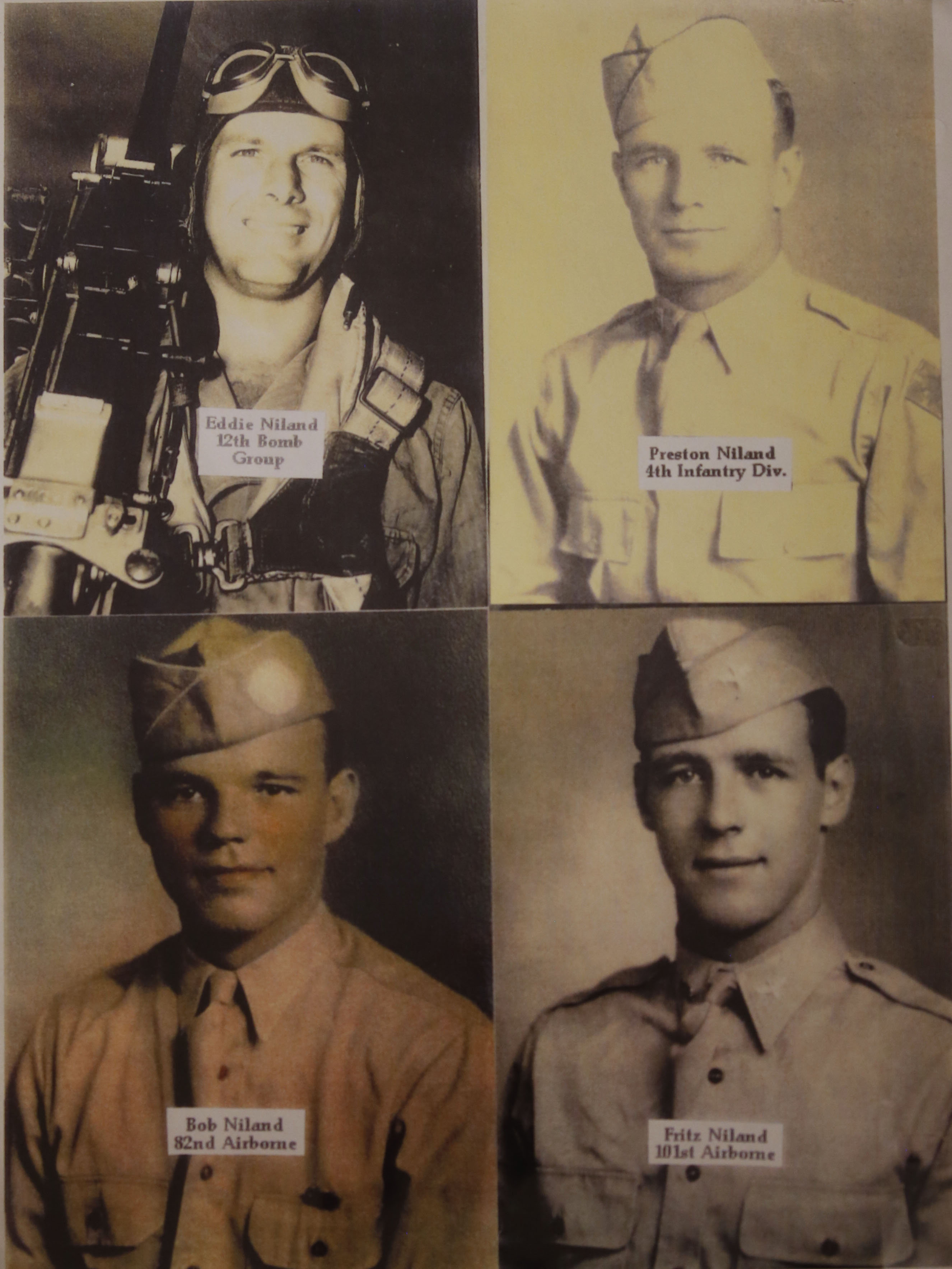 At their home, Pete and his wife, Jan, dedicate one small room to artifacts that tell the story. Their daughter Briana, a physician, added a detailed scrapbook from the family’s trip in 2014 to Normandy.

Always, Pete emphasizes the same point: What happened by the beaches and hedgerows of 1944 goes far beyond his family. It is a saga of vast generational sacrifice that Desjardins said is as tangible at the cemetery as the white gleam of the crosses.

The soldiers in those graves died for people they never knew, in a place far from home. They died as liberators and not as conquerors, Desjardins said, an act of collective selflessness that Pete Niland sums up in a distinctly Western New York way.

“The magic of the story,” he said, “are the values of Tonawanda.”

His uncles, he said, played together as boys in local streets and parks. They might sometimes feud or quarrel, but in the end they would give anything for one another.

Side by side, Bobby and Preston make that point eternally.

Pete grew into that understanding. His own father did not say much about how he was imprisoned by the Japanese for 11 months, how he lived for a time by surviving on grasshoppers, how another prisoner gave him a pair of socks to protect Ed's feet when he was finally liberated, how he weighed 85 pounds when he reunited with American forces.

“He was very soft-spoken,” said Pete, 70, who has no doubt his dad endured some level of post-traumatic stress. Over the years, Ed said little to his son about the brothers he lost or the childhood days when they shared what Pete describes as an “attic barracks” on Elmwood Park in Tonawanda.

Fritz, the surviving brother, was 24 when he was ordered home from combat. Eventually, he became an oral surgeon. He was still around Buffalo during Pete's childhood, a good-looking guy who drove a sports car before he moved away, ending up in Alaska.

Pete can also remember his grandparents, especially his grandfather, a tough old steel plant superintendent who sometimes took the child for his haircuts. Still, whatever memories the couple had of wrenching telegrams delivered to their door were not accounts they passed down to a young grandson.

It was left to Pete’s Aunt Clarissa, oldest of the six Niland siblings, to quietly tell the occasional story. Sometimes, when Pete was especially boisterous or daring, she would say: “You remind me of Bobby.”

Decades later, in a way, Pete feels fortunate. There are more than 9,000 crosses at Normandy, countless tales of sacrifice most families rarely learn in full. The movie caused historians to turn a laser focus on the Nilands. Through that research, Pete discovered much about his uncles and their final hours.

In 2014, he and Jan returned to Normandy with their daughter and some other relatives. Darren Moran, a historian and guide, led them to several places that Pete and Jan described with a kind of visceral electricity.

"We felt," Pete said, "like the four brothers were guiding us from above." 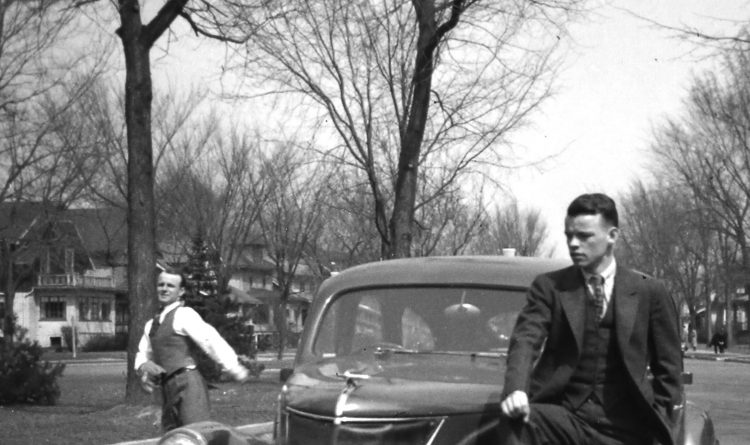 Robert Niland and his brother Preston, left, in front of their Elmwood Park home in Tonawanda before they left to fight in World War II. (Robert Kirkham/Buffalo News)

Through what seemed like impossible coincidence, they met a 90-year-old man on a remote French road who knew the farmland where Fritz and his fellow paratroopers evaded German troops. They walked through the area where Preston Niland, 29, was killed by mortar fire after another soldier went down and Preston tried to help.

Finally, they arrived at a chateau where Bobby and his unit had found themselves under fierce assault. A French woman who lived there knew the story, how a medic named Jim Kelly volunteered to remain behind with a wounded man, how Bobby Niland told him: 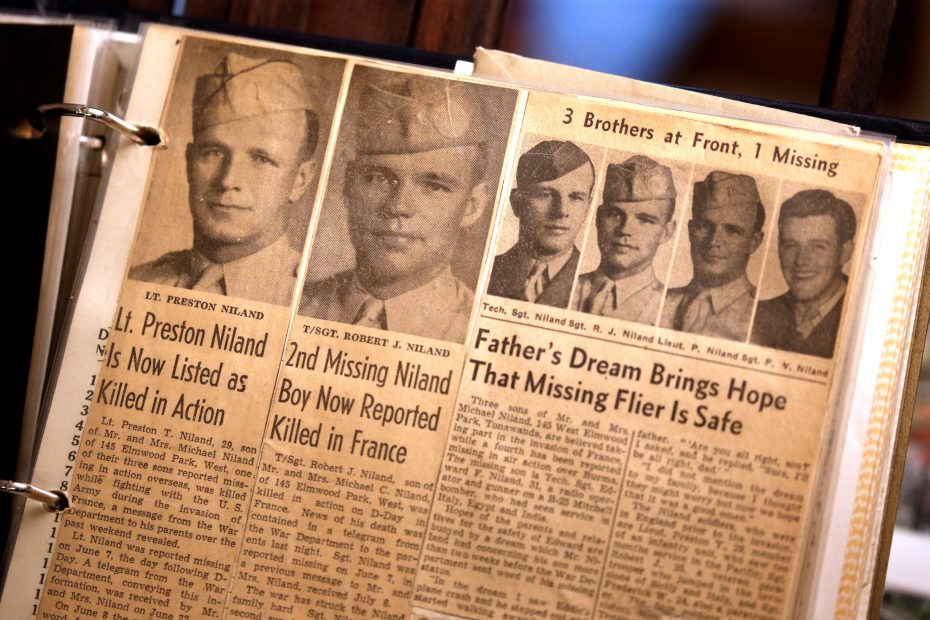 Bobby, 25, was shot to death while standing on a crate that gave him a better vista of the landscape, Moran told them. Pete and his family walked to the precise spot, and something about the place and the telling of the tale brought home "everything, all of it, right there,” Pete said.

With those words, at that moment, the Niland reserve he learned in childhood collapsed like a wall. He wept and pointed toward the Normandy sky, a gesture to his Aunt Clarissa, then walked away with his arms wrapped around his wife and daughter.

Pete was thinking about a suffering prisoner who handed his father his own socks, and the uncles who gave their lives helping wounded friends, and how such motives – multiplied countless times – explain why more than 9,000 at that cemetery all have their own white cross.