The Buffalo Bisons thought they could drum up some business as the “Buffalo Wings,” tapping into the hot national trend of minor league baseball teams using alternate identities to salute local cuisine.

The organization introduced the promotion last summer for a series against the “Rochester Plates,” with Buffalo players wearing special uniforms that featured a drumstick logo, red and orange color scheme, jersey numbers “drizzled in bleu cheese” and celery green socks. The fans ate it up.

“We don’t release financially what we do,” Bisons general manager Mike Buczkowski said. “But the ‘Wings’ merchandise last year helped to propel us to be one of the top 10 in merchandise sales in minor league baseball.”

Of course, that calls for a second helping.

The Bisons will debut redesigned "Wings" gear Wednesday against Scranton/Wilkes-Barre in the first of five “Wings Wednesday” games at Sahlen Field. Other promo dates are June 19, July 17 and Aug. 14 and 28. The Bisons also will play as the “Buffalo Wings” against the “Rochester Plates” on Monday, July 29, aka National Chicken Wing Day.

“We redesigned the logo, paying homage to the ‘flat,’ the often-overlooked yet what we feel are the superior wing,” said Brad Bisbing, the Bisons’ director of marketing and public relations.

The updated logo, created in-house by graphic designer Michele Cicatello, features the flat wing poised to use a celery stalk bat to crush a bleu cheese baseball. The new uniforms feature “medium sauce” script on a white jersey with matching orange sleeves. The “Wings” name across the chest is “dotted with bleu cheese” and supplemented by a piece of celery that reads “Buffalo.” A patch on the left sleeve evokes a moist towelette.

“This idea for the flat wing was born last year,” Buczkowski said. “The next decision after you say, ‘We’re going to use the chicken wing,’ is ‘What do you use? Do you use the drum or do you use the flat?’ We had a lot of fun, a lot of back and forth. And that’s where the idea was born for year two. Go with the flat wing and create a different design.” 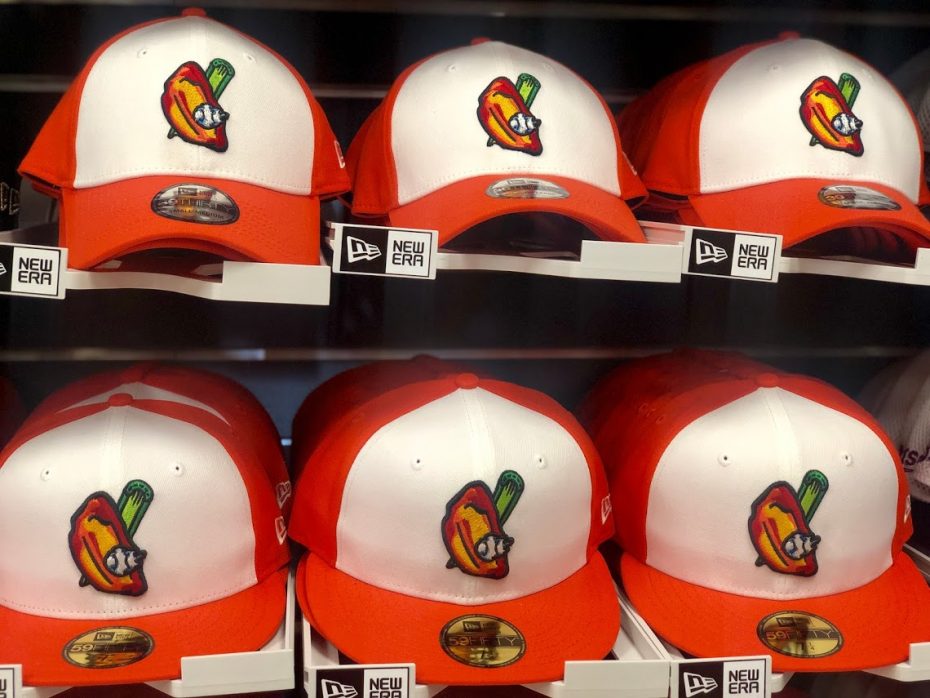 The Triple-A Fresno Grizzlies are credited with beginning this tasty trend in 2015 by playing a game as the “Fresno Tacos” as part of its annual Taco Truck Throwdown. The following season, their alter egos and accompanying merchandise returned on “Taco Tuesdays.” And the wildly popular promotion has continued.

The Lehigh Valley IronPigs were the first to bring the concept to the International League in 2016, suiting up as the “Cheesesteaks” during a “Salute to Philadelphia Night.” Fans were encouraged to pick a side by using “#TeamWit” or “#TeamWitout” on social media to determine whether players would wear a cheesesteak logo with or without onions.

The Rochester Red Wings and then-Syracuse Chiefs hopped on board in 2017, with the teams each playing a game as the “Rochester Plates” and “Syracuse Salt Potatoes,” respectively.

“Fresno did it first with the Tacos. They were the originators. Then Lehigh Valley did the Cheesesteaks. So, you know, we’re not dumb. We’re like, ‘Hey, we should find – what’s our food? Oh, we only have one choice. It’s the salt potatoes,' ” Syracuse GM Jason Smorol said, laughing.

“It was kind of easy for us. Everything we could change that said ‘Chiefs,’ we put a ‘Salt Potato’ logo over it. And the fans loved it.”

Syracuse brought its promo back for an encore in the final game that season.

Rochester announced its promotion after its game on July 4, timed to coincide with nearby restaurant Nick Tahou Hots celebrating the 100th anniversary of the garbage plate.

By the next afternoon, “Plates” gear was on back order. Not only had the merchandise flown off the shelves, but the website was inundated with orders from out of town.

“From the merchandise perspective, it took on a life of its own,” said Rochester GM Dan Mason. “And that’s when we knew we really had struck a chord with a lot of people.”

Last season, the franchises expanded the promos and switched to their alter egos to play each other in a series dubbed the “Duel of the Dishes.”

“We played one game here, one game at their place,” Mason said, “and we played for the coveted Golden Fork, which is an 8-foot wooden fork painted gold. When we won at their place, we had brought the fork down there, and our manager, Joel Skinner, a former Bisons manager, actually took the fork and slammed it into their infield. It was literally sticking out of their infield.”

Nothing but a wing thing

There wasn’t much debate in the Bisons’ front office.

“I don’t know if there was one person that picked it,” Bisbing said, “but the conversation was pretty short. ‘Should we do this?’ ‘Yes.’ ‘What should we be?’ ‘The Chicken Wings.’ ‘Done.’ ”

They joined a national parade of similar promotions.

There’s the Wilkes-Barre Melonheads, the Salem Beer Mongers and the Happy Valley Grilled Stickies. The Reading Pretzels, the Charleston Boiled Peanuts and the Omaha Sizzle (with their logo a steak in the shape of Nebraska). The Maine Whoopie Pies, the Derby City Mint Juleps and the Mahoning Valley Peppers in Oil.

“I think one of the best things about minor league baseball is that when we all have a great idea, we are anxious to share it,” Mason said. “It’s different than any other industry. If Coke comes up with a great idea to sell more soda, they don’t get on the phone and call Pepsi, right? It just, that wouldn’t happen. And while we compete on the field, and we definitely want to beat the other teams in the International League, when it comes to the business side of things we all share our best ideas on how to attract more fans to the ballpark.”

Buczkowski sees the “food idea” as a natural evolution of alternate jerseys in minor league baseball. Teams have long worn camouflage jerseys to salute the military, he said, and special jerseys on “Star Wars” nights. (The Bisons' annual Star Wars Night is Saturday.)

“And then we all just kind of build on it. In this case, you want to localize it,” Buczkowski said. “You want to take the idea, but then make it work locally for you.”

“Buffalo Wings” gear ordered online, for instance, was delivered in a cardboard “Wings” box lined with tin foil and a wet wipe.

“Minor league baseball has been, I think for a long time, we have been more innovative than a lot of the major league sports out of necessity,” Buczkowski said. “The logos in minor league baseball – we’re not going to compete with major league baseball logos and logo sales – so we’ve always thought about, ‘How do we come up with ways to have fun with it, to appeal to a wide range of audience?’ And I think what you’re seeing with those team names is exactly that. It’s a way to draw some attention to your team, to stand out from the typical logos that you see.

“If you’re in a market like us, we’re not going to compete with the Bills and the Sabres in terms of their merchandise sales. But I think we can do things like the ‘Wings.’ We can be pretty flexible and have fun with that, and hopefully the ‘second helping’ will be just as successful as the first.”