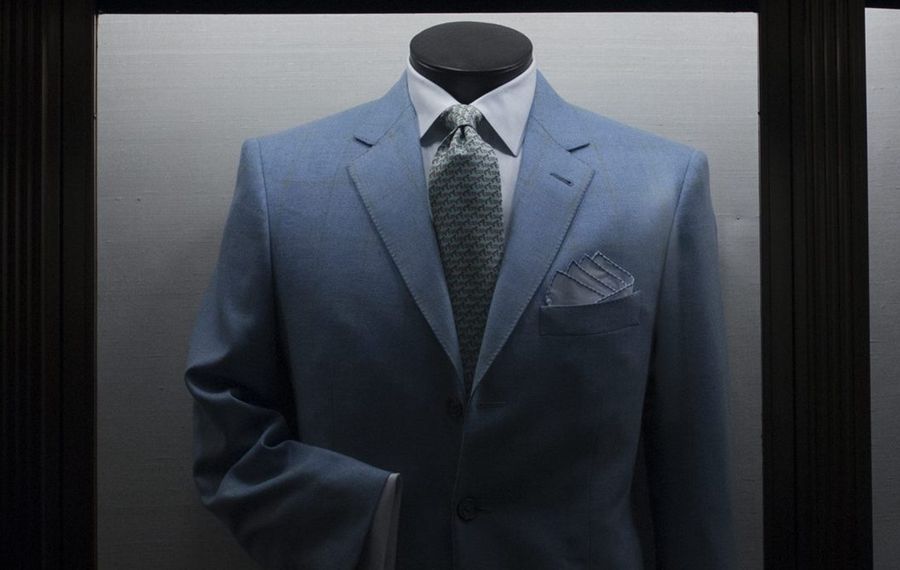 "Dressed smart like a London bloke, before he speak his suit bespoke ..."

Aside from that memorable line in the R&B song "American Boy," by Estelle and Kanye West, bespoke suits are seen but not heard. They're subtle. No Supreme logo or pattern of crisscrossed LVs indicate each suit's exclusivity, which instead lies in the suit's lack of perceivable flaws. One glance at a bespoke suit and it's apparent that whatever that suit is made out of, it's the best of the best.

Savile Row in London is the Fifth Avenue of highbrow menswear, devoid of mainstream garishness and gawking tourists. Since 1803, GQ estimates, tailors and suitmakers have set up shop inside the street's classic rowhouses, building suits for British royalty, bourgeoisie, and in present day, anyone (men and women) who desires to make the sartorial investment in bespoke.

Sandwiched between suburban mansions and a strip plaza, Barnett's headquarters on Main Street in Snyder is less assuming than Savile Row. It's Barnett's home base, though he also has locations in Manhattan; Washington, D.C.; and Beverly Hills.

“Our world is this niche that floats by itself in orbit," Barnett said.

On a recent visit, Barnett switched his flat-screen TV to a recording of last year's NHL draft, looping only the part when his client, Noah Dobson, was drafted by the New York Islanders wearing a taut, crisp navy blue Barnett suit. “Every athlete wears stuff so tight you can’t even move or breathe,” Barnett said. 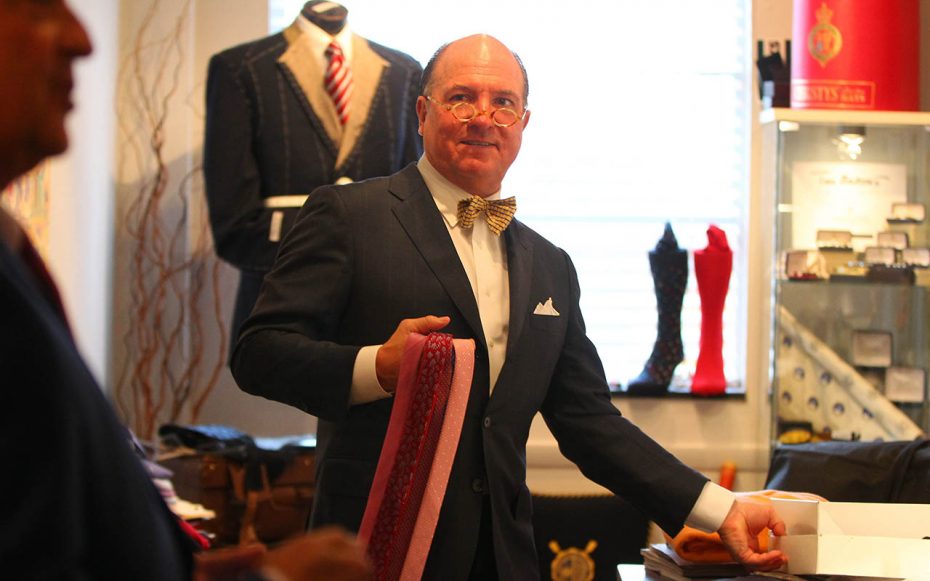 Here Barnett meets by appointment with NHL players, CEOs, and on a recent Thursday, attorney John Fromen Jr., who has been Barnett's client for 31 years.

Barnett opened the door of his shop, which is always locked, for Fromen, who arrived to try on his several finished bespoke suits. “John could probably wear a burlap bag with spray paint on it and graffiti and people would say it’s cool," Barnett said.

Sunlight poured in as the two impeccably dressed men spoke about Fromen's latest case, in which he used new 3-D printing medical technology for the first time in the courtroom, settling a $3.5 million personal injury case for a woman who suffered a traumatic brain injury. Barnett wore a light gray ensemble with a highly saturated, colorful suit lining and glasses low on his nose. He has tanned skin and wears his black hair combed back. He was enthralled in the conversation, though after spending some time with him, I believe he has a distinct ability to approach any conversation with the same vigor one would discuss a favorite book, movie, sport or person.

Barnett seemed like he had all the time in the world because that’s what one does when they sell bespoke suits or other luxury items. The experience is everything. He learned that as a child when he would accompany his grandfather to his custom suit appointments.

"It was always an interesting relationship. I would say I picked up on that early on," Barnett said about his grandfather and tailor. "They knew each other's favorite things and qualms or their wives' names. It was a real accurate depiction of two men interacting."

What is the bespoke process?

Bespoke is a specific, rare process, not to be confused with custom-made or tailored. Barnett builds every detail of his suits. His clients study fabric swatches, collected from all over the world, as Barnett guides their natural taste inclinations to match the suit’s purpose. Together, they select the suit's many components, from its outward-facing fabric to its hidden inner silk lining, to the buttons, thread, under-the-collar fabric and perhaps even embroidered initials.

After the initial design process and measuring session, Barnett sends the designs to off-site tailors who create a mock-up of the suit. Clients return and try on the rough draft. Barnett tweaks this version, then sends it back to the tailors for completion. Between Barnett, his family and off-site tailors, about 60 hours of labor are put into each garment. Suits vary in price, but generally cost at least $2,000 and often more.

On a recent visit, Barnett gingerly presented a bound book of fabric, which, by the way he handled it, seemed like it contained some sort of confidential secret.

"Most people, even my clients, many won't see anything quite at this level," he said, referring to a "super 200" wool swatch, an extremely fine micron fiber and one of Barnett's most precious fabrics. "These come from the rarest, most prized sheep in the world and they're bred for this. They don't go out in UV lights. They don't have dirt and fuzz and they're fed extremely well. They're treated like, you know, [they] have Beethoven on while they're breathing."

Fromen's favorite Barnett suit is a brown and burgundy garment built for him two decades ago that reminded him of Cary Grant. "When I first put that suit on, I got a hundred compliments," Fromen said, adding it still hangs in his closet, though it no longer fits.

He slid into his first jacket, a gray suit coat with a nearly imperceptible purple thread woven throughout the fabric. It was a standard suit for the courtroom, one to join his workplace rotation. The suit hugged him, hanging from his body in the way only a custom-built garment can, with no flaws in fit.

All of the suits in Fromen's haul were made out of a new performance fabric. (“John has discovered the joy of fabrics that move,” Barnett said.) Barnett compared the cloth to Lululemon, though it's hardly athleisure. The resemblance to yoga pants began and ended with a slight give to the otherwise normal suit fabric.

“It’s unbelievable," Barnett said. "We should put the pants on with it.”

The appeal of a Barnett suit is apparent to anyone who has walked into a room believing they were at least adequately dressed, only to find themselves in the midst of outfits on an entirely different level: the elusive level that quality fabrics naturally elevate an article of clothing to, one that just can’t be achieved by most retailers. “As you can see, I’m not a runway model," Fromen said, referencing his small stature. "I’m not buying stuff off-the-rack."

“We gotta get a picture of this one, don’t you think?” Barnett said.

They walked over to a wall covered in Barnett's logo decals to shoot a few photos on Barnett's iPhone.

Fromen tried on his final suit. It was deep blue, a combination of the shades navy and Prussian on a color wheel, and it has a slight sheen in the sunlight. Barnett asked Fromen to stand in front of the window and pose thoughtfully as he snapped a few more photos. "The only problem with Tom's new location is that I literally live down the street," Fromen said as he posed.

"You gonna wear that one out?" Barnett asked. "I'll carry some of this."

They exited the store chatting, bags in hand.