Bobby Orr could fly, like Superman or Peter Pan.

Tonight, 49 years after Orr flew in Game 4 of 1970’s Stanley Cup final, the Boston Bruins and St. Louis Blues will meet in another Game 4, this time with the Bruins leading the series 2-1 in games.

Orr ended the final series in 1970 with a gravity-defying goal that’s among the most famous in NHL history. A statue celebrating that moment — Orr in midair, the goal scored, the Cup secured — is outside Boston’s TD Garden.

And a small-scale version of it is right here in Buffalo, on the 12th floor of Delaware North’s downtown headquarters. This one is near the office of Jeremy Jacobs, the billionaire Buffalo businessman who is chairman of the company and the longtime owner of the Bruins.

I visited Jacobs in 2016 — to talk about a report the company had commissioned on the future of sports — and marveled at the airborne Orr. It’s not easy to capture the weightlessness of flight in the weighty medium of metal. 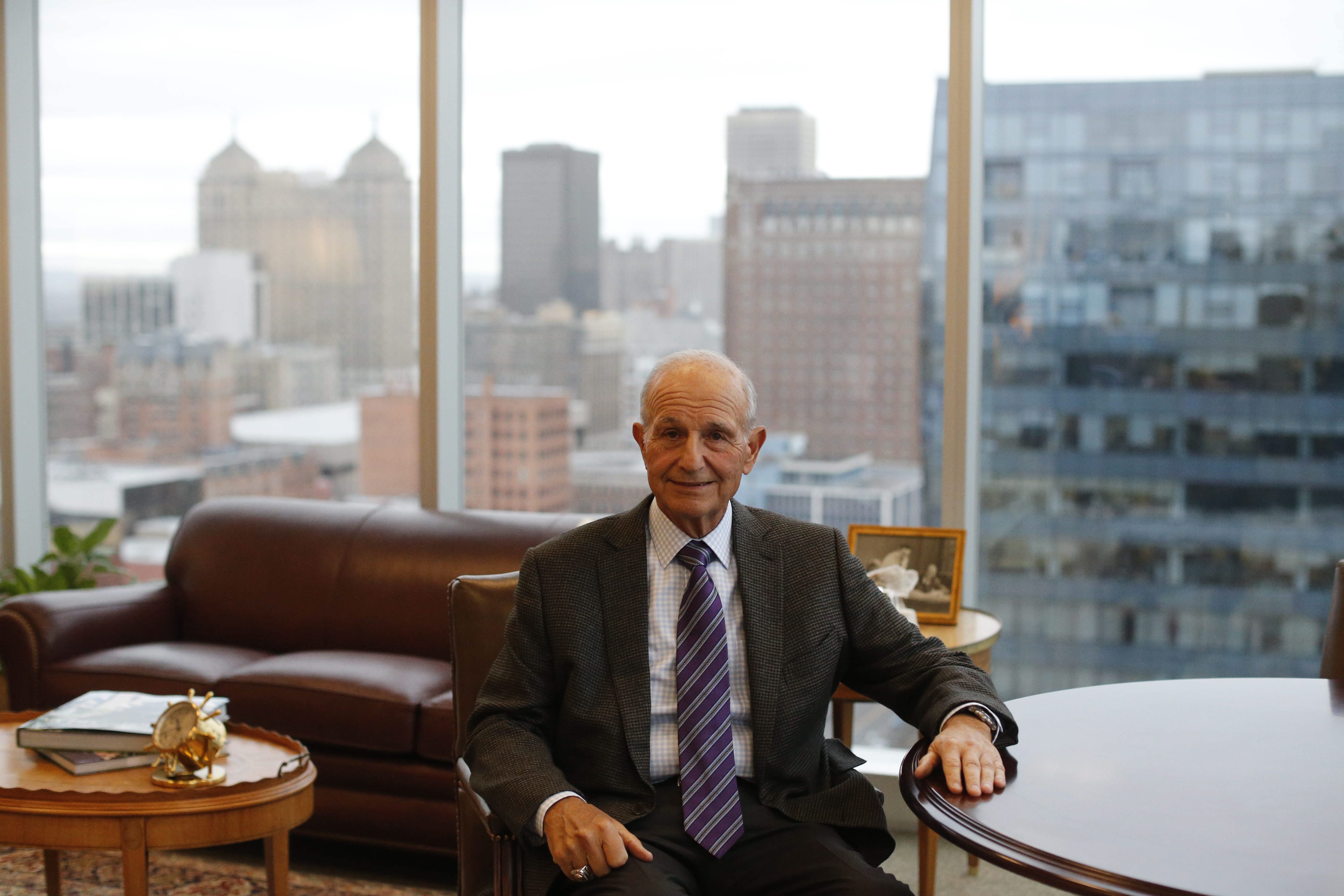 Jacobs bought the Bruins in 1975, five years after Orr’s goal. The magic moment didn’t happen on his watch, but no worries: When you buy the Bruins, you buy their history, too.

The stunning view from Jacobs’ office is of Lake Erie as it flows into the Niagara River. Beyond is Fort Erie, Ont., home of Fort Erie Race Track. When Jacobs was a young man, working in the family’s sports concessions business, his territory included racetracks in southern Ontario.

“Horse racing is almost nonexistent today,” Jacobs told me in 2016. “If we had looked out into the future, maybe we would have reacted differently. But we didn’t foresee it.”

The report is all about the future. The statue is all about the past — bronze poured over a skeleton of steel, roughly 1,000 pounds of sacred memory unveiled in Boston in 2010 for the 40th anniversary of The Goal, as it has come to be called.

The split-second before Orr’s overtime goal was the last moment in NHL history that did not include the Buffalo Sabres as a member. Orr’s forever goal ended the 1969-70 season, heralding the birth of the Sabres and Vancouver Canucks, who would join the NHL as expansion teams for the 1970-71 season.

The Goal offers other local connections. The quicksilver assist on the give-and-go goal came from Bruins center Derek Sanderson, a native of Niagara Falls, Ont. And Scotty Bowman, a resident of our region for decades now, was the Blues’ coach then.

Bowman would spend one more season in St. Louis and then take over the Montreal Canadiens. He wanted to name a son Stanley, as in the Cup, but his wife said he would have to win one first.

They had a son born in Montreal a month or so after the Canadiens won Bowman’s first Cup in his second season there. Sure enough, they named him Stanley and he would grow up in Buffalo after his father arrived to coach the Sabres.

Stan Bowman would graduate from Canisius High School and Notre Dame and today is the three-time Cup-winning general manager of the Chicago Blackhawks — the team that his father beat to win his first Stanley Cup, as fate would have it.

Orr’s aerial goal ended a four-game sweep 4:40 into overtime, so it lacks the drama of a Cup-winning goal scored in, say, a seventh game or a fourth overtime. What makes it so memorable is something as low-tech as a photograph taken for a newspaper.

Even in the age of YouTube, where The Goal can be summoned anytime online in video form, it is the photo taken by the late Ray Lussier for the Boston Record-American that informs our collective memory.

Orr cuts in front of the goal and defenseman Noel Picard catches Orr’s left ankle with the blade of his stick. That’s what sends Orr horizontal to the ice — hoist by his own Picard, as Michael Farber put it in Sports Illustrated.

"He soars for eternity wearing a look of rapture and amazement,” Farber wrote, “hockey’s Peter Pan.”

Peter Pan is the boy who doesn’t grow up. This story is populated by boys who do.

Bowman was 34 when he first coached the Blues in 1968. He would go on to win the most games (1,248 regular season, plus 233 more in the playoffs) and most Cups (nine) of any coach in NHL history. He’s 85 now — and the son he named for Lord Stanley’s chalice wins Cups of his own these days.

Jacobs was 28 when his father died and he took over the family business in 1968. He is on the cusp of 80 now. His sons, Jerry Jr. and Lou, are co-CEOs of Delaware North while son Charlie is CEO of the company’s Boston holdings, which include TD Garden — and the statue that freeze-frames high-flying hockey history.

The Goal was scored in Boston, against St Louis, but no one should be surprised that Buffalo angles echo through the years. They always do, somehow.