The Buffalo Bills' safety had checked his phone about every 15 minutes in the morning for weather updates.

"For the last week, honestly," Hyde said. "It said thunderstorms, lightning early in the week. And now it’s kind of blue."

It wasn't long before the ballpark was awash in bright sunshine, as most in the estimated crowd of about 2,500 sat to watch Hyde and the rest of the Bills' defense face Josh Allen and his offensive teammates in seven innings of what loosely could be called competition.

Pitches were delivered from behind an L-screen used for batting practice to minimize the potential for the sort of accident that may have had coach Sean McDermott, who threw out the first pitch, holding his breath a bit. There was a lot of smiling and laughing and all around lighthearted fun.

It included Allen chugging beer after winning the home run derby (because, apparently, that's what quarterbacks do these days at sports venues). It included 6-foot-6-inch, 329-pound defensive tackle Jordan Phillips lifting 5-foot-8-inch, 173-pound Isaiah McKenzie off first base and carrying him to the dugout after the offense's attempt to insert him as a pinch runner for 314-pound guard Wyatt Teller. It included McDermott taking an impromptu at-bat that resulted in a ground out. He then walked over to the first base wall, where he obliged numerous fans' autograph requests with the game in progress.

Finally, there was the Gatorade shower that Jordan Phillips and fellow D-lineman Kyle Peko gave an unsuspecting Hyde, who later found himself shaking ice cubes from his pants.

“It was awesome just to see the fans get around us like this," Hyde said. "Honestly, not really knowing what to expect from the game, not knowing what to expect from the weather and to just come through like this ... the weather gods came through in the end. Sun’s out, everybody had a blast. This is exactly what my wife and I and the foundation wanted to bring to Buffalo.

"Every year, put it down on the calendar: first Sunday in June, we’re going to have this event."

For the record, the defense won, 8-7, on the strength of a straight-shot, solo homer by tackle Harrison Phillips over a fence put in place to significantly shorten the depth of the outfield. After crossing home plate, he revealed a T-shirt bearing the photo of late Bills super fan Pancho Billa, with whom Phillips developed a close bond during Pancho's battle with pancreatic cancer. A moment of silence also was observed for Pancho before the national anthem. 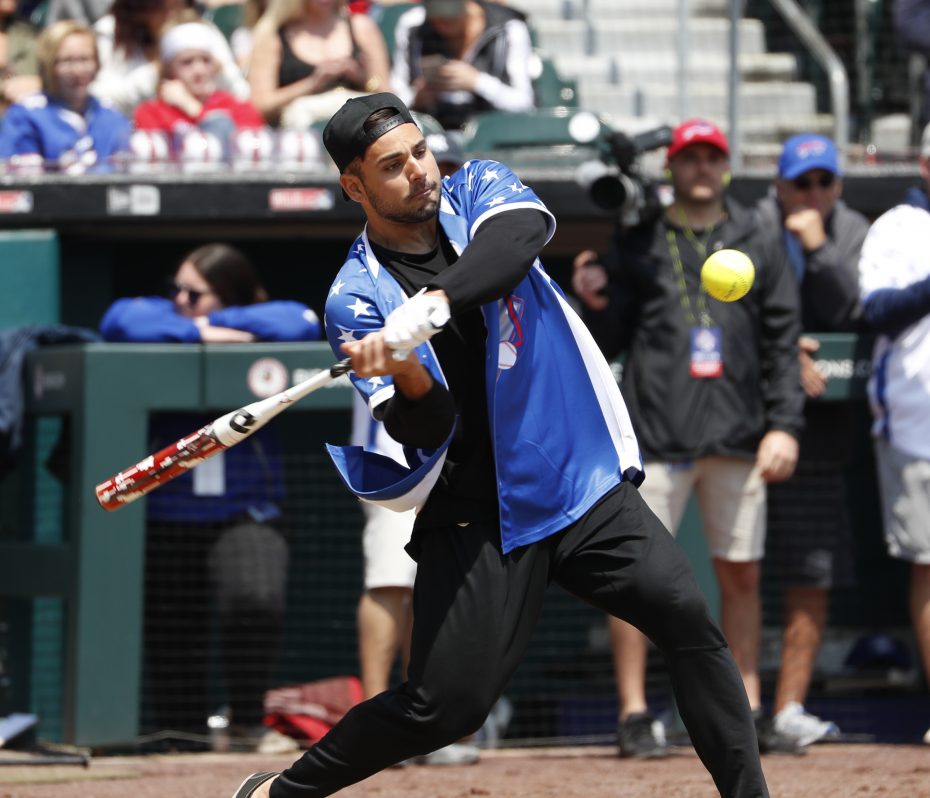 But the real winners Sunday were Hyde's IMagINe for Youth foundation, for which the event generated more than $40,000 that will go to schools in Western New York to help provide academic and athletic resources for children facing financial hardships, and the Bills' team bonding.

“Coach preaches family and love, and this is this how you get it done," Hyde said. "I haven’t been in the league for 20 years, but I’m going into my seventh year and during OTAs already you feel guys clicking together. You know, we all go golfing, we go bowling, we do all this stuff together. And on the field, we’re just competing. 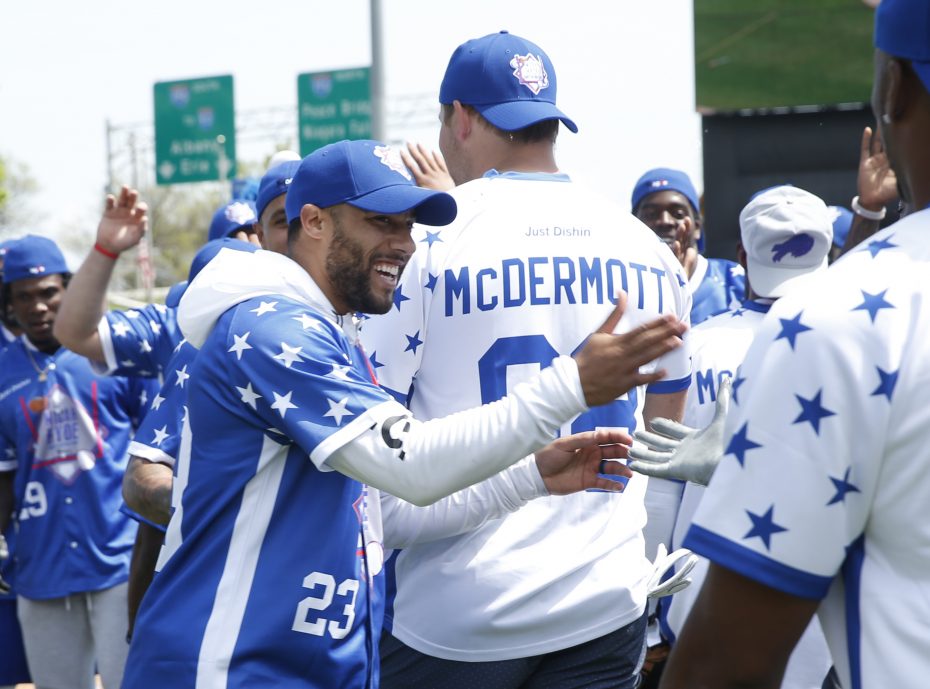 The Buffalo Bills' offense took on the Bills' defense in the inaugural Micah Hyde Charity Softball Game, which benefits Micah's IMagINe for Youth Foundation, Sunday, June 2, 2019 at Sahlen Field. Hyde shakes hands with players from the offense after the defense took an 8-7 victory. (Sharon Cantillon/Buffalo News)

He had no problems getting a large portion of teammates to agree to participate. Former Bills running back Fred Jackson and center Eric Wood also played, while University at Buffalo football coach Lance Leipold served as a celebrity third base coach.

“A lot of people were like, ‘Yo, I’m doing it, I’m doing it,' " Hyde said. "The weekend’s kind of time you can get away, you can go see your family, whatever cities you want to go to visit and guys stuck around to be a part of this game. So I appreciate them so much and appreciate all the fans coming not knowing if it’s going to rain or not.

Jackson, considered a primary leader during his time with the Bills and someone who gave back to the community, took it all in. He saw Sunday's event as an example of both the kind of camaraderie the Bills have and the leadership Hyde seems comfortable providing to involve his teammates in something that not only was for a good cause by also helped bring them closer together.

"They're in great hands," Jackson said. "Any time you get a guy like Micah putting together an organization like this, getting a lot of players, past and present, to come be a part of it, it just lets me know that the community is in great hands with guys like him. So it was an easy decision for me to come take part in it. I look forward to doing it down the road."