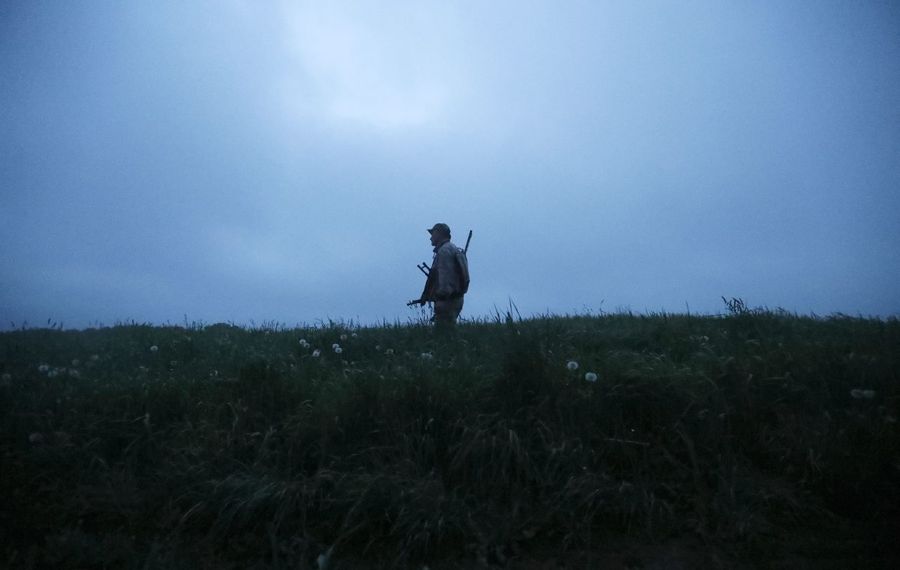 Orchard Park resident Paul Barnas, a hunter for more than 50 years, remembers when he and his brothers would join hundreds of others for the opening day of big game hunting season in small towns through the Southern Tier.

"They used to be mobbed," said Barnas, 71, recalling the local bars and restaurants.

Hunting culture runs deep in Western New York. More Erie County residents hold hunting licenses than any other county in the state – by far. Monroe and Niagara counties also fall within the top 10. Many hunters are wrapping up turkey hunting season today.

But the number of hunters – the majority of whom are white men in their late 40s and early 50s – is shrinking at a rapid rate, according to data provided by the state Department of Environmental Conservation.

Over the last 10 years, the DEC's six-county western region has gone from having roughly 100,000 hunting license holders to only 80,000.

A similar pattern is holding true across the state and the country.

"Our hunting fraternity is getting older," said Lockport resident Dale Dunkelberger, a veteran hunting education instructor and Western New York representative to the state's Conservation Fund Advisory Board. "A lot of guys, they just stop hunting because of health reasons."

This poses long-term challenges for not only the hunting industry, but also for conservationists.

Hunting and fishing license revenue flows into the state's Conservation Fund. While some conservationists do not view hunting as compatible with nature, without the money voluntarily paid by those who hunt and fish, the DEC would lose more than a third of the financial support it needs to keep its conservation and wildlife management programs going.

Thanks to broader recruitment efforts, more women and youth are taking an interest in the sport. But the growing difficulties accessing private hunting land, competition from indoor entertainment and other cultural forces are keeping more potential hunters from picking up a rifle and spending a day in the woods.

DEC officials say New York State isn't losing hunters at the same rate as other states, which have been forced to cut wildlife and habitat restoration programs because of the drop in hunting license revenue.

But while the number of hunting license holders has leveled off in recent years, they show no signs of returning to the levels they were 10 or 15 years ago, according to DEC data for Region 9, which includes Erie, Niagara, Wyoming, Cattaraugus, Chautauqua and Allegany counties.

The 2016 National Survey of Fishing, Hunting and Wildlife-Associated Recreation not only showed a sharp drop over a five-year period in the number of hunters, but also a steep drop in the number of days hunters spent out in the field, and the amount of money they invested in the pastime.

Barnas has watched with disappointment as hunters have gone from devoting full weekends out in the woods to showing up for maybe a day at the start of the season.

"Then you don’t see hunters again until Thanksgiving," he said.

The 45-54 age group comprises the region's biggest group of hunters. It's the group most likely to have the time and disposable income to invest in the pastime, said Mary Bailey, the DEC's environmental program specialist who oversees the issuance of sports licenses.

But these same hunters are giving up the sport at an astonishing rate. Fifteen years ago, 10,000 Erie County residents in this age group held hunting licenses. Last year, they accounted for only 4,100, half the number of even a decade ago.

There are many reasons why hunting has fallen in popularity. The changing cultural and political landscape, workplace demands and the lack of accessible hunting grounds have all been blamed for the decline. Population loss may also a contributing factor, though the decline in hunting license holders is a nationwide trend.

In an age of handheld digital devices, streaming video services and gaming consoles, the competition for leisure time is fierce, particularly among young people. Such entertaining and low-effort options contrast sharply with the hours of silent and patient watchfulness required for successful hunters. 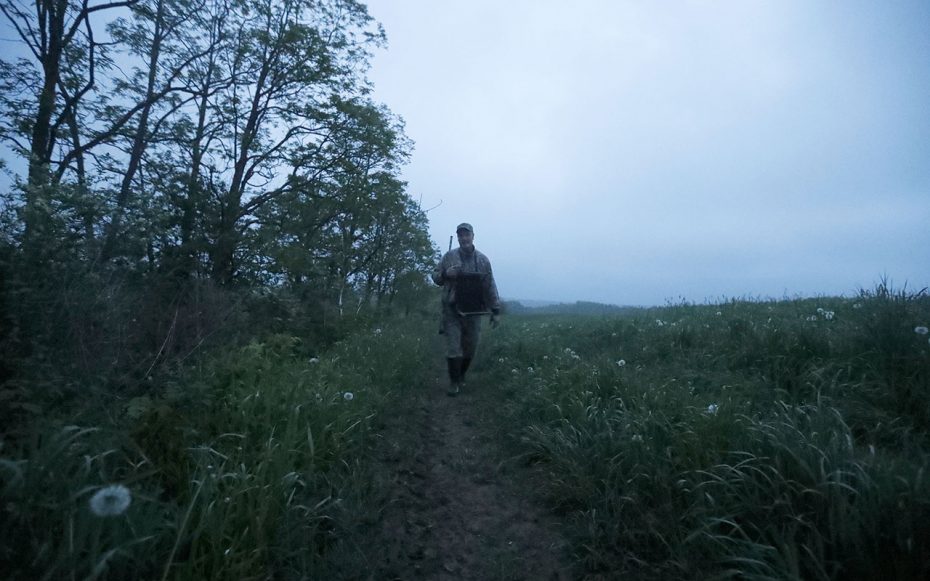 Paul Solomon makes his daily pilgrimage before work in his quest to bag his second turkey before the end of the season. (Mark Mulville/Buffalo News)

Holland resident Paul Solomon has been waking at 4:30 every morning since the start of turkey hunting season on May 1. Each morning, he pulls on his camouflage gear, makes his way into a neighbor's field with his shotgun and push-button turkey call and waits until it's close to 7 a.m., when he needs to get ready for work.

"It’s peaceful, and I eat the game that I shoot," he said of his hunting commitment. "If I didn’t eat the game, I wouldn’t kill the game. I would rather see it running around, living its life, than wasted. It’s not about the killing though. It’s the actual hunt, the pursuit."

But Solomon, 58, recognizes that attraction can be hard to instill in younger generations.

"Kids nowadays are more into computers and their phones," he said. "Even my one nephew, who's in his 20s, is kind of bored with it."

While moral opposition to hunting is nothing new, hunters also acknowledge that anti-gun and anti-cruelty messages have sensitized people, as has the community and political focus on gun violence and school shootings.

Barnas, who grew up in a time when schools had rifle teams and taught students about hunting and gun safety, found he couldn't convince his own son to become a hunter. While his son will join him at the gun club for skeet shooting and target practice, he draws the line at shooting living things.

Finally, hunters themselves are grappling with barriers to the sport that makes them more likely to cut back or give up on it.

Access to private hunting property has been greatly diminished as small, independent farmers are selling their land to larger farm corporations that may not permit hunting, or are being turned over to housing developers.

The loss of habitat is driving wild game like deer out of the woods and into the suburbs, said Jeff Jondle, president of the Erie County Federation of Sportsmen's Clubs.

"The number one taker of the deer is the Buick," he said. 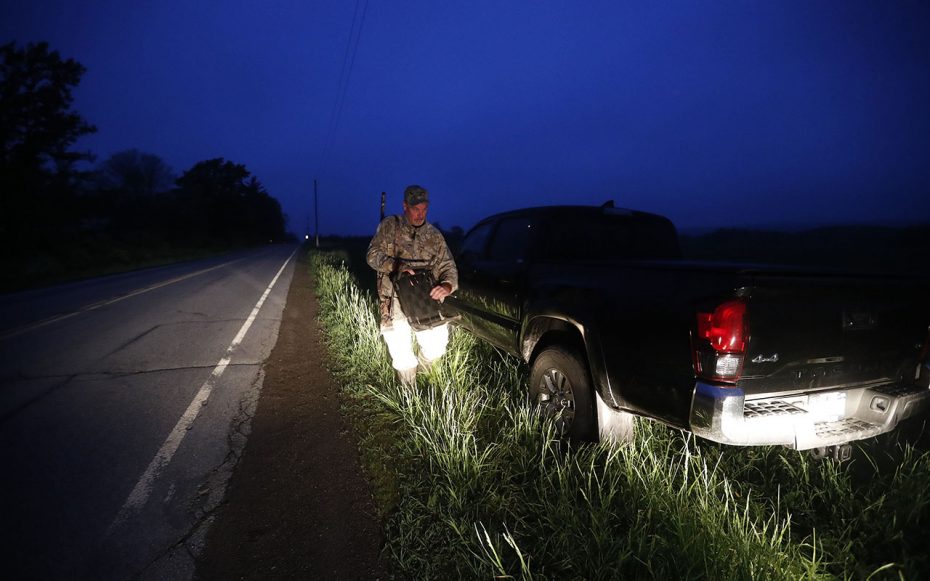 Solomon parks his car and gets ready to head out into the fields to hunt turkey before the close of the spring season this week. (Mark Mulville/Buffalo News)

Hunters also accuse new property owners of buying large tracts of land and denying permission to other hunters who were granted access in the past.

"State game lands aren’t big enough," said Dunkelberger, who used to enjoy hunting trips to Chautauqua County. "I hunted in Sherman, N.Y., for years. We had access to thousands of acres. Now all that land that we used to hunt on down in Sherman is all posted up."

Hunters also point to workplace demands and changing family attitudes about how to spend vacation time.

Ransomville farmer Herb Lederhouse, who helps run the Niagara County Gobblers with his wife, Pam, said he's known friends who used to hunt on the weekends until their employer started asking them to pick up shifts on Saturdays and Sundays.

"They can’t afford not to," he said. "What are you going to do, turn down eight hours at time-and-a-half or sit in the woods for eight hours and get nothing?"

Hunting declines have been anticipated for years by government wildlife officials, local gun and sportsmen clubs and businesses. These groups have responded aggressively by investing huge sums in attracting more women and youth to the sport.

Pam Lederhouse, a former hunting education instructor, has hunted for decades with her husband. She remembers when it was impossible to find any camouflage hunting gear made for women.

"It was awful," she said. "I had hand-me-downs that didn’t fit right."

That is no longer a problem. Fitted, female camouflage gear and even fishing waders now hang from the racks of sporting goods shops. Meanwhile, national hunting organizations are promoting outdoor skill-building programs aimed at women with little to no prior experience in hunting, fishing or outdoor survival skills.

The DEC also offers a three-day "Becoming an Outdoorswoman" program and will be featuring images of women hunting and fishing in its annual fishing and hunting guides.

"Women are going to be our near-term target audience for some of our recruitment, retention and reactivation efforts because that’s 50 percent of our population," said Doug Stang, the DEC's assistant director for the Division of Fish and Wildlife.

He also noted that while trophy hunting meets with widespread disapproval, surveys show that 80% to 90% of people support recreational hunting as a source of food.

Some hunters have knocked the DEC for not being more proactive, but agency officials said they're using traditional and social media platforms to improve their outreach.

"I think we’re doing a little better job of balancing it out," said Bailey, who oversees the issuance of sports licenses.

Local hunting/fishing clubs, hunting-based businesses, and national organizations are also pushing hard to promote programs for nontraditional hunters and to personally recruit newbies to the sport.

Pam and Herb Lederhouse recalled attending the National Wild Turkey Federation Convention in Nashville in February. Every participant was asked to sign a pledge promising to take someone new to hunt. They also attended a workshop focused on how to talk with millennials about the benefits of hunting – focusing on the fact that the meat they hunt and eat is all natural and organic.

DEC officials say the collective outreach push is making an impact. The percentage of women taking up hunting has risen in recent years.

"We’re not going to give up on it," Bailey said.

A Sportsman's Tale: 12-year-old Owen gets his bird