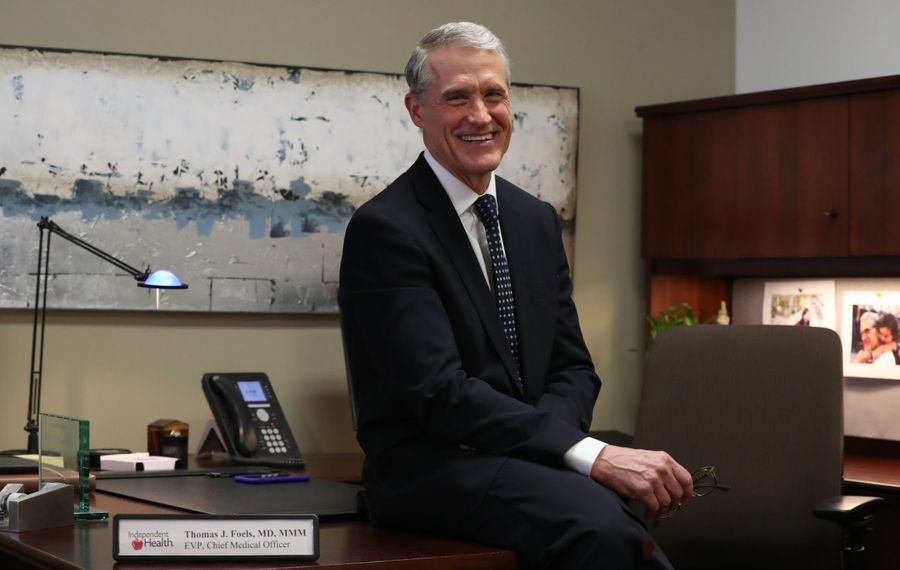 Nearly one of every $5 spent in the United States goes to health care.

That's almost $10,000 per person annually, roughly $2,000 more than second-place Switzerland and twice that of Canada.

Despite that spending, the U.S. generally lands at, or near, the bottom of health outcomes for its citizens when the Johns Hopkins Bloomberg School of Public Health releases rankings of the top industrialized nations in the world.

Dr. Thomas J. Foels has been among those in the regional health insurance industry with the task of pushing against those numbers.

“I think the health care system can still be very difficult to navigate at times,” said Foels, who retired this spring as executive vice president and chief medical officer of Independent Health.

Foels, 63, a North Tonawanda native who lives in Clarence, holds a master’s in medical management from Tulane University. He came back to Buffalo in the early 1980s to open a pediatric practice after medical school at the University of Rochester.

He started working part time at Independent Health in 1994 and jumped into health insurance full time three years later, when Dr. Michael W. Cropp, CEO of the region’s second largest health insurer, convinced Foels he could have a larger impact from such a perch.

His departure comes at an uncertain time for the American health care system.

He knows his former employer, and U.S. health care, must continue to change. That said, he is not a big fan of a single-payer health insurance system.

“The problem you’re trying to solve is to improve outcomes and quality, and to eliminate non-value-added services, which can be about 30% of our current spend,” Foels said.

He also worries that shifting politics may damage such a system, and believes the choice of doctors and services needs to be in patient hands.

“When you look at Medicare, there’s a sanctioned single-payer system,” he said, “and in this market, 50% of Medicare-eligible people have chosen an insurance company (Independent Health is among them) to manage their benefits, because they feel there's more value there.”

Still, he is excited about much of what he sees going forward. Advances in genetics will create growing opportunities for more personalized treatments, he said. He also believes more coordinated care – with an emphasis on the primary care provider as quarterback – should be the cornerstone of any system.

“Without it, everything else starts to fall apart pretty quickly because then people don't know where to get care,” said Foels, who touched on several issues during a recent interview. 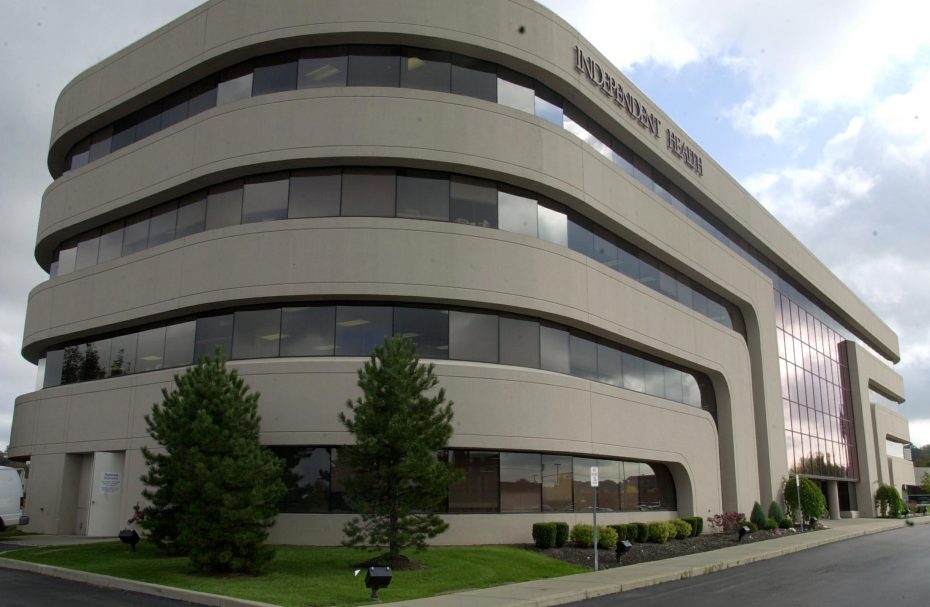 Western New York is one of few places across the country where its three largest private insurers – BlueCross BlueShield of WNY, Independent Health and Univera Healthcare – are nonprofit corporations.

“This is an incredibly unique role in American health care, because we're not driven by shareholder profit,” Foels said. “Our shareholders are the community.”

This makes the insurers more nimble, more responsive, and more in tune with members, he said.

As a result, the insurers and their foundations have focused on encouraging healthy behaviors with strategies that include outdoor summer fitness classes, nutrition programs and health coaches who can help those they serve to better navigate chronic conditions that include heart disease, diabetes and mental illness.

“We're also fortunate to have a medical school,” Foels said. “Many, many, many communities are not so blessed.”

The University at Buffalo Jacobs School of Medicine and Biomedical Sciences, along with other colleges in the region, has turned out an impressive crop of doctors and other health professionals, many of whom stayed here after graduation, Foels said.

“I'd love to see a little bit more bias on the primary care side, because I think that needs special emphasis,” he said. “There's always work to be done … but I think everybody can stand back in admiration of what the health care system has accomplished.”

Foels remembers doctors and other workers smoking cigarettes in Rochester hospitals while he was in medical school three decades ago. Primary care doctors and specialists were frequent visitors to hospital patients back then. Some even saw patients at home.

The trend now tilts all but the sickest patients away from hospitals and emergency rooms and toward less expensive outpatient specialty care and surgery centers – some run by doctor groups, others by hospital health systems – as well as urgent care settings and online telemedicine treatment, as warranted.

AIDS was a catastrophic disease in the early years Foels was a doctor. It continued to rage as he started with Independent Health. It explains why he joined the Evergreen Health board, which over time moved the nonprofit agency, initially called AIDS Community Services, to become more diverse.

The agency now also provides care for those living with chronic illnesses and infectious diseases, including those who are mentally ill, homeless and drug addicted.

That shift symbolizes the strides made to turn many once-deadly diseases into chronic conditions that can be managed, though not always cured.

The transformation also changed health insurance companies, Foels said. They needed to become more holistic and preventative in an age where medicine continues to grow in complexity – and cost.

During the last decade as chief medical officer, Foels helped Independent Health build on a team-oriented approach to regional health care. He was among leaders of an initiative launched in 2012 called the Primary Connection, which combines computer data, greater medical collaboration and a willingness to share best practices among doctor groups. The effort first included internal medicine, family practice and pediatric doctors, and has since spread to medical specialties.

“The primary care physicians don't visit hospitals, they don't do home visits much of any kind anymore, and they're kind of separated from their specialty peers,” Foels said. “So we spent a lot of time helping to create these virtual teams.”

That approach has become particularly critical for primary care providers, who Foels said deserve “special hero awards” because they now are generally challenged with coordinating care for older, sicker patients who often have more than one serious condition, and who can struggle with far-flung family members and mental health needs.

“Pediatrics is significantly different today than when I was in practice, too” he said. “We were fighting infectious disease. It was serious stuff … but a lot of those infections have come under control. Now a disproportionate portion of work is devoted toward behavioral health issues, and we have a substance abuse crisis that we couldn't have imagined back then …

“There are new choices and drugs and diagnostics that didn't exist years ago," Foels added, “and the primaries, they just manage through this. They've been just such great advocates."

A question of costs

The transition came with a boom in technological advancement, pharmaceutical growth and a higher percentage of older Americans.

Financial pressures, including many years of double-digit hikes in insurance rates, were an unwelcome part of the process.

“I think the costs are things that every American is acutely aware of,” said Foels, who has testified before Congress and supports bipartisan calls to shift the U.S. system from a fee-for-service model to one based on patient-centered, value-based care.

In its simplest form, that means rewarding doctors and other providers for preventing disease and keeping people out of hospitals, and limiting tests and treatments that help marginally, if at all.

Most American companies need to compete globally, Foels said, so public insurance through Medicare, Medicaid and the Veterans Administration, and private employer-based insurance needs to be affordable.

Foels said he is pleased that health costs have moderated for the most part.

Tired of the cost of prescription drugs? Share your story

“One thing that we have to solve as society is what are we going to do with the pharmaceutical industry, which is 25% of the health care spend,” he said. “There aren't anywhere near enough controls over the pricing of pharmaceuticals.”

Too few health professionals also know too little about the impact of cost on their patients, Foels said. He has been heartened in recent years as medical school students and others in the field cycle in and out of Independent Health on internships.

“Usually during their second week, they go, ‘I thought you paid claims and you negotiated rates with hospitals. I had no idea your main focus was to manage the health of populations, and that you spent the time and energy that you do tracking people with high-risk conditions and reaching out to them with case management – and looking carefully at what science really says is best practice, and trying to manage physicians, and assisting them wherever possible. And that some of the things that you do with prior authorization are done for the intent of making sure that people are getting the right medicine at the right time, and not the wrong medicine for an indication is not warranted.’”

Politicians since the Clinton administration of the 1990s have squabbled over how best to maneuver the complexities and rein in costs of the national health system, which has grown to represent roughly 18 percent of the national Gross Domestic Product.

Regional insurers have looked to build greater efficiencies, Foels said. The Primary Connection is one example.

Using data-driven analytics, Independent Health has been able to tell doctors when their offices fall within the best practices range for successful patient outcomes and when they fall below such thresholds.

Last year, Foels and Independent Health raised eyebrows when they threatened to withhold a percentage of payments to retina specialists who used more expensive injectable drugs to treat wet macular degeneration, based on a region average. The company softened its stance after a backlash but Foels said the insurer will continue to work with outlier doctors to better understand differences in their practice standards – patient age, severity of illness and socio-economic difference are among things that can come into play – and try to help them better line up with their peers when other factors are the same.

“Some of us have the privilege of being able to prioritize our health because we don't have the social burdens that are part of every minute, every day,” he said. “If you were in that same situation, you probably wouldn't find yourself in a much different place.”

This is one reason why Foels counts himself among those thankful for Comprehensive Primary Care Plus, a program introduced in the region several weeks ago. It will pump hundreds of millions of dollars in federal funding into primary care practices that choose to serve about 90,000 people on the traditional fee-for-service Medicare program instead of more popular – and costly – Medicare Advantage plans.

In such a changing regional and national landscape, what remains most fundamentally important?

“The need for people to advocate for their own health, the sense of personal accountability for your health and that of your family,” Foels said. “I don't know how to put this nicely, but we know what makes us healthy. It's a matter of prioritizing it in your life, realizing how important it is for you. Even a good health care system cannot always solve for those things that you may, in some way, bring on yourself.

"I think that's going to be an ongoing conversation we have as a society.”

Independent Health launched a national search to replace Foels, who with his wife, Patricia, a retired Clarence elementary school teacher, plan to spend more time traveling and with family.

The doctor also looks to bring his measured approach to one or more nonprofits he has served as a board member during the last two decades. Those include Evergreen Health and Hospice Buffalo.