The Elton John biopic "Rocketman" opens Thursday at the North Park Theatre – but it isn't the featured attraction.

The 1920 theater's third and last phase of restoration once again reveals the grandeur hidden beneath decades of dirt and grime. It also positions the theater into tip-top shape in advance of its 100th birthday in 2020.

"I've been coming here my whole life and was absolutely stunned," said Delaware Council Member Joel Feroleto after a sneak preview Tuesday. "It took my breath away."

One showstopper is the second-floor Art Nouveau stained-glass windows that haven't been seen from inside the theater in more than 60 years. They're now visible following the removal of a dropped ceiling, more than doubling the ceiling's height to over 30 feet.

The windows are believed to have been plastered over and covered in the lobby with a cement ceiling between 1948 and the early 1950s to hide the "Shea's North Park" name etched into the glass. The decision was made by the Loews movie chain after purchasing the theater from Paramount Pictures in 1948.

The theater's original colors were discovered thanks to some sleuth work by Brett Swiatek, third-generation owner of Swiatek Studios, a Clarence-based restoration company. Hues of gold, the central color, and blue and red now adorn walls and ornamental details. 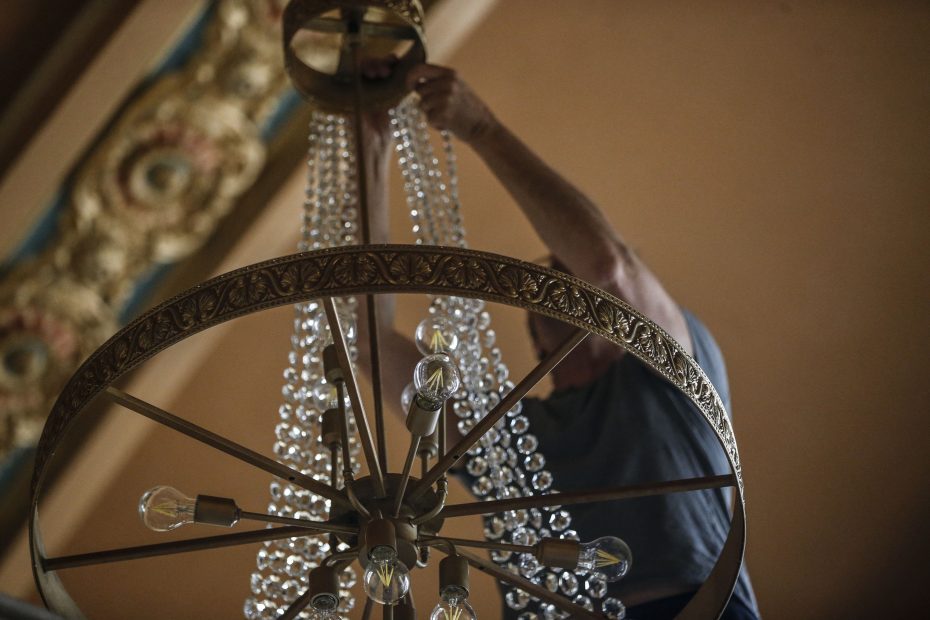 A chandelier by Robert King Lighting, a design influenced by an original Tiffany cap and chain, is installed in the lobby at the North Park Theatre. (Derek Gee/Buffalo News)

A small platform that had been a window allowing theater employees to walk across the dropped ceiling now matches two others with the use of a mold.

"It's a 'Romeo and Juliet' balcony," said Michael Christiano, the theater's director.

Christiano and building owner Thomas Eoannou partnered several years ago to revive the Neoclassical single-screen theater, which has operated as a not-for-profit since 2015, one year after it reopened following decades of operation by the Dipson Theatres chain.

"Our goal has been to bring back as much of the theater, inside and outside, to the way it looked," Christiano said. "By stripping away concrete and dropped ceilings, and repairing mistakes from the past, we hoped to give it our best shot to bring it back to where it was when it was the original neighborhood movie theater in Buffalo."

For Ray Barker, the theater's program director and lifetime North Park moviegoer, the removal of the dropped ceiling was a shock – it's the only one he's ever known.

"One of the most beautiful aspects of the theater is that when you go into the North Park you're stepping back into time into a different world," Barker said, likening it to the return of the Roaring '20s.

Sharing co-billing is the now-brightly lit fresco above the stage. It was painted by Raphael Beck, whose work was prominent at Buffalo's World's Fair, the 1901 Pan-American Exposition.

During the first phase, the size of the screen was reduced and pushed back 5 feet, and the masking and curtains were eliminated, allowing viewing of what was around it. The proscenium arch, walls and ceiling were restored.

Cleaning the surfaces proved challenging, since restorers had to remove varnish that had been like a glue for nicotine, carbon, dirt and other impurities. Some theaters, like Shea's, have had to deal with residues left over from coal heat.

The fresco's colors have been punched up and varnished, and new lights mounted on and behind the screen have improved the angle of light hitting the canvas. Now, the fresco, which has two figures and roses, and surrounding architectural details are bathed in light.

"The gold crackle in the background makes such a profound difference," said Michael Mammana, a decorative artist and project manager with Swiatek.

"It was completely unnoticed before," he said. "It really ties it all together."

The company restored Shea's Buffalo Theatre and is restoring the Palace Theatre in Lockport and the Hollywood Theater in Gowanda.

Mammana said the work on the North Park Theatre has been a total restoration.

"Everything has been brought back to life – the gilding, the tapestries," Mammana said as he gazed at the proscenium. 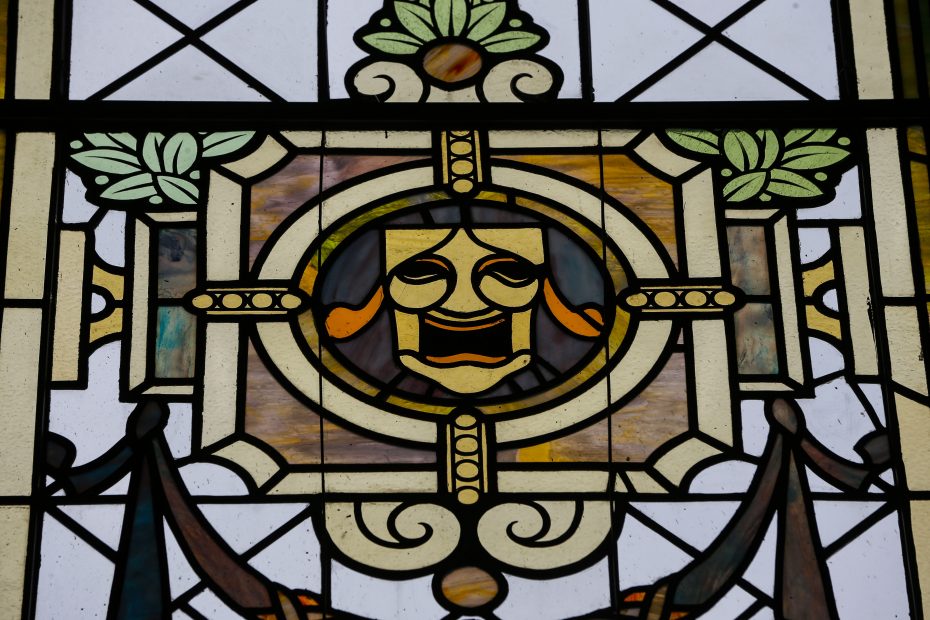 Detail of the restored original stained glass window in the lobby of the North Park Theatre. (Derek Gee/Buffalo News)

He marveled at the extraordinary craftsmanship and artistry done inside the theater by the first wave of European immigrants.

"I always said Shea's was beautiful to begin with," Mammana said. "What we did there was just kind of highlight the beauty of it by brightening the whole place up.

"But this place was a mess when we came into it," he said. "This was really a restoration project. This was bringing a theater back."

Outside the theater, the cast concrete is being repointed, weather stains are being removed and two stone crowns are being brought back. Wooden poster cases, similar to what was there a century ago, are installed.

But the exterior work received a setback when it was discovered under the cast concrete that the cornice had been jack hammered decades ago, leaving more damage than anticipated. Christiano said it will be addressed, but will take a little longer to do so.

The $315,000 project received $150,000 from the state Office of Parks, Recreation and Historic Preservation with the help of former State Sen. Mark Grisanti. Support also came from the Richard W. Rupp, John R. Oishei, Ralph C. Wilson Jr. and Margaret L. Wendt foundations, and from Feroleto and his late predecessor, Michael LoCurto. Theater fundraisers, including a current GoFundMe campaign, have brought in more than $20,000.

Swiatek said working on the North Park has been gratifying.

"Everybody has a special place in their heart for this theater," he said. "It shows through in the people who come and the immense amount of gratitude expressed for returning this place to its former glory."

He said it's been challenging to get the theater to this point.

"We're able to pull away the shade, so to speak, so the sun can come through and really see all the color and beauty that was intended for this place," Swiatek said.

He said more clues to the past are still contained within its walls.

"There are hidden stencils in the ceiling," said Swiatek, standing inside the auditorium, noting that was a trademark of architect Henry Spann's designs.

After being closed for two weeks, the theater and its landmark multicolored marquee will reopen at 5 p.m. Thursday to invited guests and donors, followed an hour later by the general public.

The $25 fundraiser includes a chance to tour the theater, enjoy a glass of wine and appetizers, and see "Rocketman" at 7:45 p.m. Tickets are available at northparktheatre.org.