With no heat or electricity, the house at 38 Hirschbeck St. was abandoned for years, according to neighbors. But it wasn't always vacant during that time. Prostitutes would come and go. So would drug users.

And for a few months in 2017, Dana L. Gidney –  a homeless former Marine nicknamed "Push Up" – slept there, they said.

"Everyone around here knew him," Hirschbeck Street resident Alan Fino said of Gidney. "He would do pushups for money."

The house had been flipped by AbdulAziz HouHou, a Kuwaiti real estate broker in prison for a Ponzi scheme Kuwaiti authorities say included the 160 properties HouHou and his companies sold or brokered in Buffalo from 2013 through 2016.

Fires started at 20 of the Buffalo properties HouHou flipped, with nine houses so badly burned that the city demolished what was left of them, according to a Buffalo News review of city Fire Department records and news reports.

Half of the fires – including the one on Hirschbeck – are considered arsons, according to Fire Department reports.

A few of the fires caused injuries. Most were minor injuries suffered by firefighters. Gidney was the only fatality. 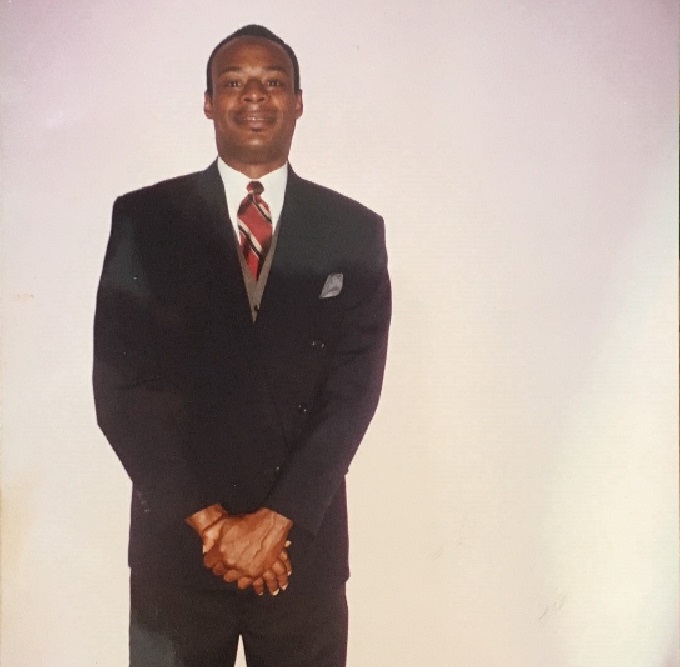 Gidney's older brother, Terrence, 59, said the family knew he was living on the streets, and had been trying to help him for years. But Gidney's problems – which the family traces back to his being tossed out of the Marines – grew into a challenging combination of drug addiction and mental illness, family members said.

"I tried to help him," Terrence Gidney said. "I was trying to get legal power to put him in a care home. ... But then he died."

Terrence Gidney questioned how property owners can abandon houses, leaving them open for the homeless or others to get inside, and, in this case, die. He wants answers on his only brother's death.

"Who is going to be held accountable?" Terrence Gidney asked. "Someone has to be held responsible. There's been a loss of life."

Booted from the Marines

Terrence Gidney thought his brother was destined for a military career. The younger Gidney left high school – the former Seneca Vocational – in 1978 to join the Marines. He finished one overseas tour in the post-Vietnam era and was back stateside in 1980 starting another tour, Terrence Gidney recalled.

"He was a Marine. He loved the Corps. He was a good soldier," Terrence Gidney said of his brother.

But at the age of 20, after less than three years in the Marines, Gidney got kicked out for refusing an assignment.

Gidney and another Marine at Camp Geiger in North Carolina were ordered to go to a nearby farm, and retrieve silverware from mess hall scraps being being fed to pigs. The farmer had a contract to buy leftover mess hall food. Refusing the order got the two soldiers brought up on charges. The story made front-page news around the country. 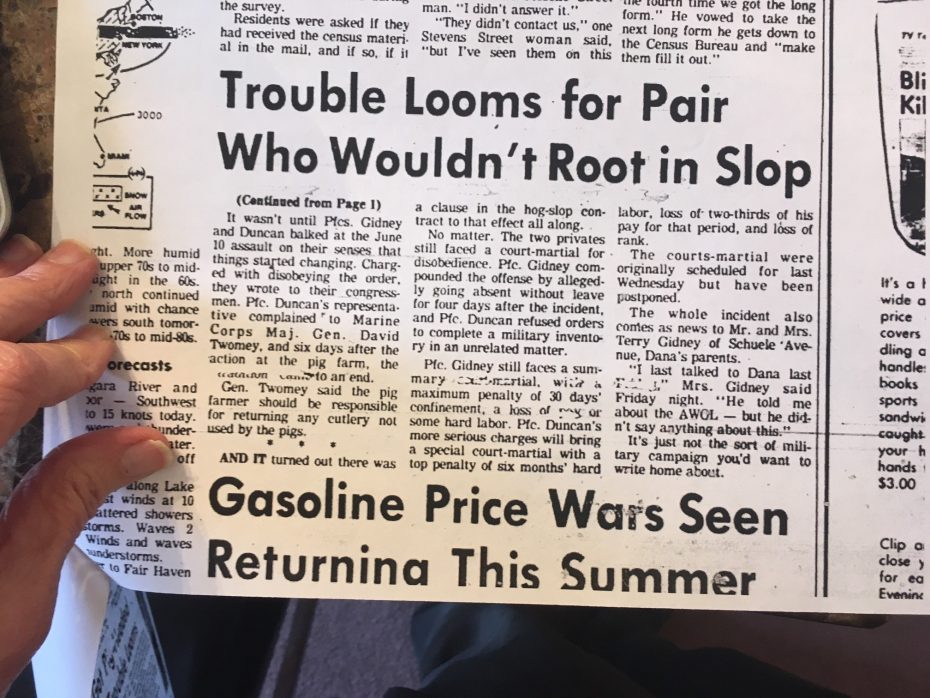 Terrence Gidney said he wanted his brother to challenge the dismissal, which came with a less than honorable discharge. But after spending time in the camp stockade, Gidney was too discouraged, and not interested in fighting back, Terrence Gidney said.

"He wouldn't talk about it," Gidney's father, Terry, 82, said of the pig farm incident.

Instead of a military career, Gidney got married, and worked at a car wash and other odd jobs in Buffalo.

The two had something in common.

Warrick was breaking records and winning awards at competitive pushup events. Gidney was showing off his own pushup skills in the gym, as well as on the street.

"Dana was showing some new style pushups," Warrick said. "He would rock into the pushup and rock out of it."

A tall muscular man, Gidney could often be seen on Broadway doing pushups for extra cash the way musicians often play instruments on the street for money.

The other than honorable discharge Gidney received as a result of the pig farm incident proved a challenge for him, his family members said.

It made it hard for him to get a good job.

As time went on, Gidney showed signs of mental illness, which the family believes was triggered by the way the Marine Corps treated him, his brother said.

"That would help put you over the edge," Gidney's father said, adding: "He was a happy kid growing up. When he came back, he was not happy. He was never the same as before."

Family members said Gidney's less than honorable discharge prevented him at the time from getting mental health treatment from the Veterans Administration Hospital. Instead, Gidney spent some time at Buffalo Psychiatric Center, and would periodically go to Erie County Medical Center, where he was treated with antipsychotics, family members said.

But as years went on, Gidney refused his family's efforts to get him back into treatment, his brother said.

He was living on the streets.

But he continued doing pushups. 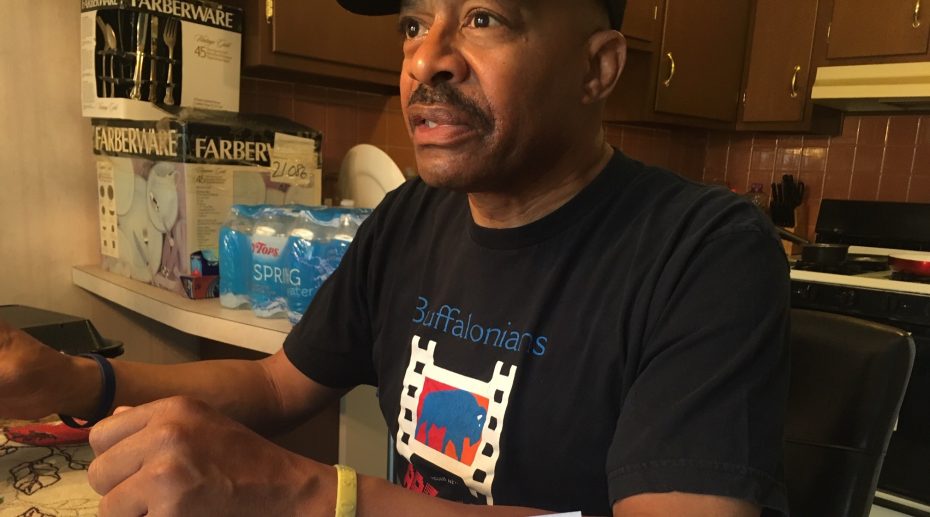 "He was a Marine. He loved the Corps," Terrence Gidney said of his brother Dana. (Susan Schulman/Buffalo News)

A fixture on Broadway

"Push Up" – as Gidney was  known – often stationed himself on Broadway at the corner of Bailey, according to Alan Fino, who has lived on Hirschbeck Street since 2005.

"Fifty pushups for $1," he would say, according to Karen Whalen, a former Hirschbeck resident, who recalled giving Push Up coffee when he shoveled snow from her sidewalk.

She remembered him stopping by the bar she worked at on Broadway, offering to do pushups for a drink.

"He came and did pushups for years," Whalen said.

"I really loved Push Up," she added. "He wasn't a bad guy. He was a veteran addicted to crack. He needed help."

But over the years, the Hirschbeck residents said, Push Up's drug use wore on him – as well as on some of the neighbors offering him help.

Fino became frustrated with Push Up. He would give Push Up food, but then Push Up would steal decorative lighting and statutes from Fino's house, Fino said. 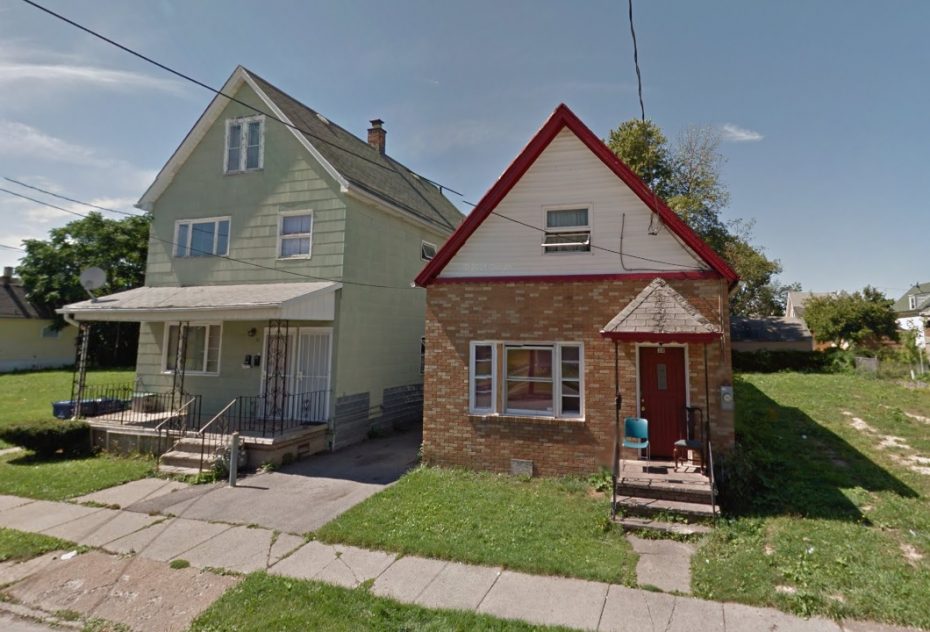 The Hirschbeck house was engulfed in flames when crews arrived at the scene at about 4 a.m. March 17, 2017.

"Entry was never made due to the extensive fire conditions," the report states. The roof of the building had collapsed, fire officials said.

Six days later, a demolition crew the city hired to take down what was left of the house found Gidney's body in the rubble. An autopsy found Gidney died of smoke inhalation, police said. His body was not burned.

The fire is listed as an arson, but authorities don't know who started it, how or why.

Some neighbors speculated Push Up made a fire by burning wood in a pot to keep warm, and that it spread while he slept. Other neighbors said they believe the fire was intentionally set by someone angry with Push Up over a dispute involving drugs or money.

"We didn't come to a determination as to how the fire started," said Fire Capt. Johnathan T. Eaton, who heads the fire investigation unit. 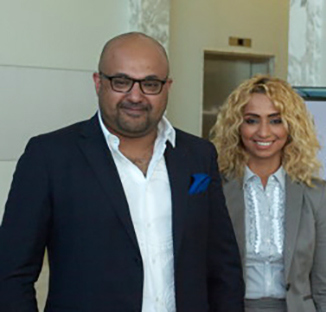 AbdulAziz HouHou and Bedour Haidar, his wife, in a 2013 photo. (Provided photo)

Glebova Realty Group of Tonawanda bought 38 Hirschbeck Ave. for $22,000 on Jan. 22, 2015,  and resold the house the same day to Abdul Kader Alayli. HouHou's Kuwaiti organization served as broker, records show. The price was recorded in the Erie County Clerk's Office as $37,000.

Alayli could not be reached for comment, and it's not clear if he ever had title to the property.

There was a technical problem with the way Glebova described the property on the deed. Since the mistake was never corrected, city records listed Glebova as owner until 2018, when Buffalo foreclosed on the property because of delinquent taxes.

Glebova is no longer in business. The firm was owned by Maxim Levin, who is in federal prison for tax evasion. He has not responded to requests for comment.

Among those who spoke at the service was Warrick, who said he last saw Push Up a week or two before the fire.

"He was on his corner, Broadway and Bailey, trying to get a little change doing pushups for money," Warrick recalled.

"He was such a kind person, and a good friend to me," Warrick said. "The city mourns his loss."

Fires have started at 20 of the 160 Buffalo houses flipped as part of Kuwaiti real estate broker AbdulAziz HouHou’s Ponzi scheme. Ten of the 20 fires were classified by Buffalo Fire Department officials as arsons. HouHou is in prison in Kuwait, sentenced to 10 years for defrauding Kuwaitis who bought houses that HouHou sold or brokered in Buffalo and other U.S. cities from 2013 through 2016.

Here are the locations, dates and damage in the arson fires at HouHou houses:

The house next door was flipped in a Ponzi scheme. Then it went up in flames.