When police identified the victim who was gunned down on the street in North Buffalo on a Friday night in March, Eve Shippens immediately recognized the young man as one of hers — a former student she taught years ago when the teenager was still in middle school.

Shippens cried. And when she shared her emotions on Facebook, fellow teachers responded by telling their own stories of losing a student.

That’s when Shippens, a teacher at East Community High School on Northampton Street, spoke up.

She has tried to draw attention to the impact of trauma and grief, not just on students, but on their educators, as well.

Shippens asked the Buffalo Public Schools to consider doing more for teachers coping with the tragic loss of a student, which has become an all-too-familiar scene across this urban district.

In March, it was the 17-year-old fatally shot outside the North Buffalo Community Center.

In April, it was the boy killed by a stray bullet.

In May, it was the teenager who lost his life in a fiery crash.

“I would like the district to start looking at this as a real issue,” said Shippens. “The number of colleagues I had reach out to me telling me their stories — it’s the right time to get this out there.”

In fact, the issue is much broader.

There’s growing attention paid to the mental health of students and recognizing the effects that trauma — neglect, abuse, exposure to violence — can have on their learning and behavior in the classroom.

But, Shippens said, there has been little discussion about the emotional toll it can have on educators who rely on a personal connection with their students to be effective teachers, a connection that means they also carry the burden of their student's trauma.

“Teachers can experience ‘vicarious traumatization,’ ” said Amanda Nickerson, a professor of counseling, school and educational psychology in the University at Buffalo’s Graduate School of Education.

[RELATED: In Buffalo's children, wounds no one sees]

That’s what can happen when witnessing how others react to trauma while trying to help them cope, she explained.

Effects vary by person, Nickerson said, but they are quite similar to the reactions someone may experience from trauma itself. That includes physical and mental exhaustion, anxiety, irritability, headaches, trouble sleeping or feelings of helplessness or avoidance, she said.

Vicarious traumatization is taught to mental health professionals being trained to work with people in crisis, but not so much to teachers.

“Because teachers are primarily prepared to focus on academic issues, they do not typically have comprehensive training on working with trauma and the effect it has on caregivers,” Nickerson said.

“In my experience training and consulting with schools after crisis events, we often focus on how to best meet the needs of the students,” Nickerson said. “However, the adults in the environment may be just as impacted, but then carry the additional responsibility of helping the students.”

The first time Shippens lost a student to violence was about 10 years ago.

For a long time after that, Shippens struggled in the classroom. She wasn’t connecting with her students and thought it had to do with her transition to a new school, but it finally dawned on her. 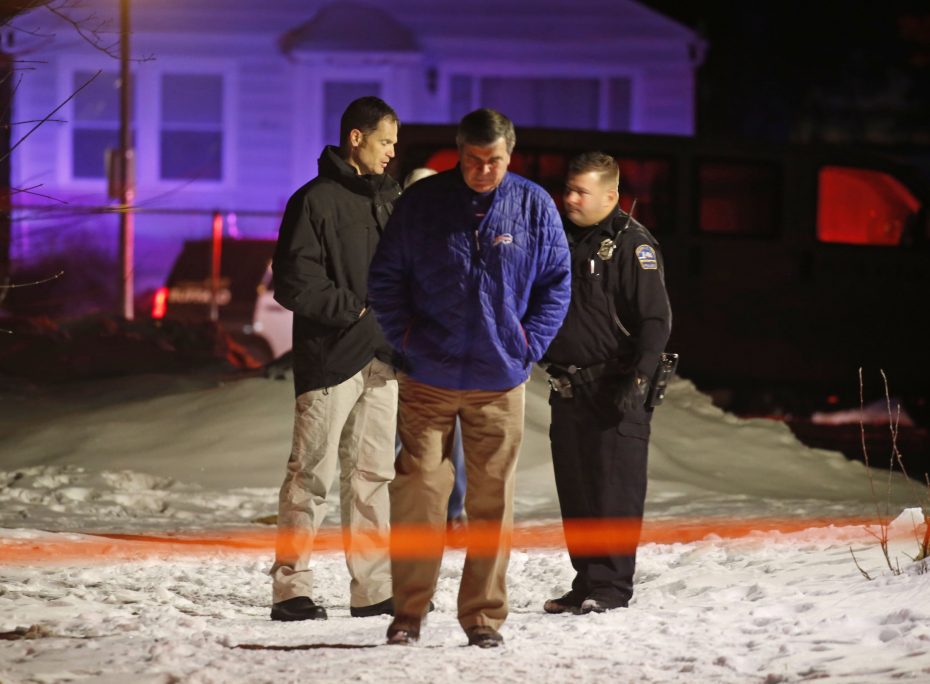 Deputy Police Commissioner Joseph Gramaglia, left, and investigators were at the scene of a shooting near the Robert M. Ryan North Buffalo Community Center on March 8. (Robert Kirkham/Buffalo News)

Shippens, a teacher for 18 years who serves as co-chair of the Buffalo Parent-Teacher Organization, decided to take up the cause.

As a first step, Shippens asked that teachers and staff affected by the death of a student be permitted to attend funeral services if they’re held during the school day.

In addition, she asked the district to provide supports and services that staff members can use to help work through their own grief and trauma.

“I understand we have good health insurance and could go see counselors, but just like me, I didn’t know I was numb for three years,” she said. “There’s a lot of people who don’t even recognize what’s going on.”

The dialogue has helped raise some awareness.

“Everyone has a story,” said Elizabeth Spiro-Carman, an art teacher at School 6 on South Division Street.

Hers is the 2014 shooting death of a 14-year-old student caught in a crossfire.

She knew the boy for years as a pleasant, hardworking kid who, when given the choice of what to draw, would choose nature and flowers. To Spiro-Carman, he was family, and the peace garden she tends to outside the school in spring is for him.

“We carry it with us,” she said, “and that’s the point I think Eve is making.”

A student suicide earlier this year faced Kelly Cooper, an English-as-a-new language teacher at Newcomer Academy. Not only did she have to help break the news to the students, but she had her own questions.

Often, however, the trauma stems from the poverty that teachers encounter in Buffalo schools.

“Every day,” said Scott McGloin, a colleague of Shippens at East, referring to poverty as a factor.

In recent years, the district has emphasized training for teachers to better care for students impacted by trauma and he has acknowledged that similar support for teachers makes sense.

“We concur with this as being an issue,” Cash recently told Shippens upon her request to the Board of Education, “but I do believe that it’s preliminary to jump to what would be a solution to it.

“What I would like to do is maybe sit down with a group of staff and a group of teachers who have this experience and then come up with some potential solutions together,” Cash said.