Travis Yost has been involved in the world of hockey analytics for a decade and is part of TSN's Hockey Analytics team. Prior to joining TSN, Yost was a contributor at the Ottawa Citizen, the Sporting News and NHL Numbers, and he has been a consultant for an NHL franchise. He will be contributing breakdowns on the Buffalo Sabres for The Buffalo News. Follow Yost on Twitter: @travisyost.

It is fair to say that Buffalo Sabres coach Ralph Krueger has one of the more diverse résumés you can find as a coaching candidate in the National Hockey League. Not only does he have previous head coaching experience with the Edmonton Oilers professionally and Team Europe internationally, he also has worked in a front office role in the English Premier League and has participated in the World Economic Forum.

That résumé is one of the big reasons why Krueger landed in Buffalo. Communication, leadership and relationship building are foundational components of any successful leader, and Krueger has shown that he can use those attributes across different operating environments.

There’s no questioning Krueger’s background. But I did think it would be interesting to circle back on what should be the most important and telling data point we have available – the work he did over one NHL season with the 2012-13 Edmonton Oilers.

The 2012-13 Oilers were, like most Oilers teams of the last two decades, set up to fail. I don’t think there’s a more simplistic way to explain that then pointing out that their top six scorers were all 23 or younger. The core talent – names like Taylor Hall, Jordan Eberle and Ryan Nugent-Hopkins – were building blocks towards a better tomorrow, but there was nothing surrounding or insulating Edmonton’s future core. The young players struggled against tough competition and the depth players struggled against just about everyone.

Krueger was unceremoniously fired at the end of the 45-point season (77 points over a full 82 games). When pressed about the firing, then-General Manager Craig MacTavish mentioned he was looking for a head coach "more aligned" with the way he wanted to run the team.

I wanted to dig into that season a bit more, especially from a perspective of evaluating Krueger’s impact. Evaluating head coaching performance is insanely difficult – perhaps one of the hardest things to accomplish, if only because so much of what makes a head coach great is what makes a front office great. (Hint: That’s having a lot of good hockey players.) Trying to apportion who is responsible for different components of success or failure, to that point, becomes quite tricky.

One measure I do believe is a great synopsis of coaching impact concerns lineup optimization. We know that head coaches are incentivized to win, and in order to win, your most talented and skilled players need to be sopping up most of the minutes. As certain players underperform or overperform, expectations are that coaches can appropriately flex around their lineup and preserve optimized deployment.

You can do this through a series of statistical measures but, for the sake of this piece, I utilized publicly available goals above replacement data which (a) tries to encapsulate both offensive and defensive player contributions; and thus (b) is all-encompassing. The table below shows the relationship between a player’s value added that season and the usage rates he carried over the season, all at even strength. (The higher the correlation, the better a coach was at getting his more valuable players into more minutes.) One thing of note: Nine of the top 14 teams here did reach the playoffs, so there is a good bit of directionality here. 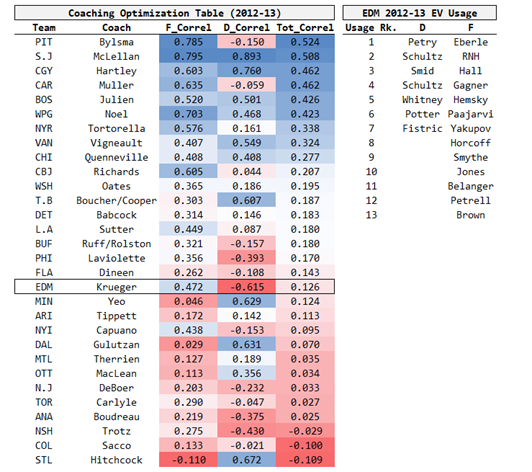 Specific to Krueger, it’s clear he had the forward group mostly figured out. Most of his premium minutes went to the younger talent – the high-end, first-rounders that were already starting to blossom at the NHL level. That’s encouraging, because one of the key tenets of the modern era of hockey is that it really is a young man’s game, and older players look more and more exposed by the years. By forwards alone, Krueger had the ninth-most optimized lineup. The leaders here were Todd McLellan and Dan Bylsma; Ken Hitchcock brought up the rear.

Defensively, it's a completely different story. Krueger had the most mismanaged blue line of any coach in the league. Looking at it further, you can start to see why. Again, not a lot of talent for Krueger to work with, but his top four was comprised of Jeff Petry, Justin Schultz, Ladislav Smid and a rotation of Nick Schultz and Ryan Whitney. At this point, Smid was losing his legs and was a nonfactor offensively, and Schultz ended up being emphatically miscast for his capabilities. (To Schultz’s credit, he has turned out to be a fine depth option since leaving Edmonton.)  Depth defenders in Corey Potter and Mark Fistric ended up having better seasons than their peers, but neither played much of anything at even strength that year.

Krueger gets a pretty ugly grade here, but I think there’s some substantial context worth noting here – outside of Petry, none of these guys were top-four options at this point in their careers, so Krueger was really trying to make something out of nothing.

This is but one way to assess or evaluate the impact a coach is having on his team, and there is obviously a tremendous amount of nuance with this. Still, it does help us answer one question: With the talent each coach had at his disposal, did he do his best to order the usage appropriately? That’s a worthy question to have answered, if only because it gives us insight into how a coach evaluates his roster, and how many wins he might be adding (or subtracting) from the way he manages his team.

As it pertains to Krueger, there’s no doubt he was dealt a terrible hand in Edmonton. And there’s enough here to be positive about. But I’m curious to see what he does defensively starting in 2019-20 – a data-driven approach should yield considerable returns for the Sabres in particular, as they have a couple of glaring problems on the blue line that could be fixed in short order.