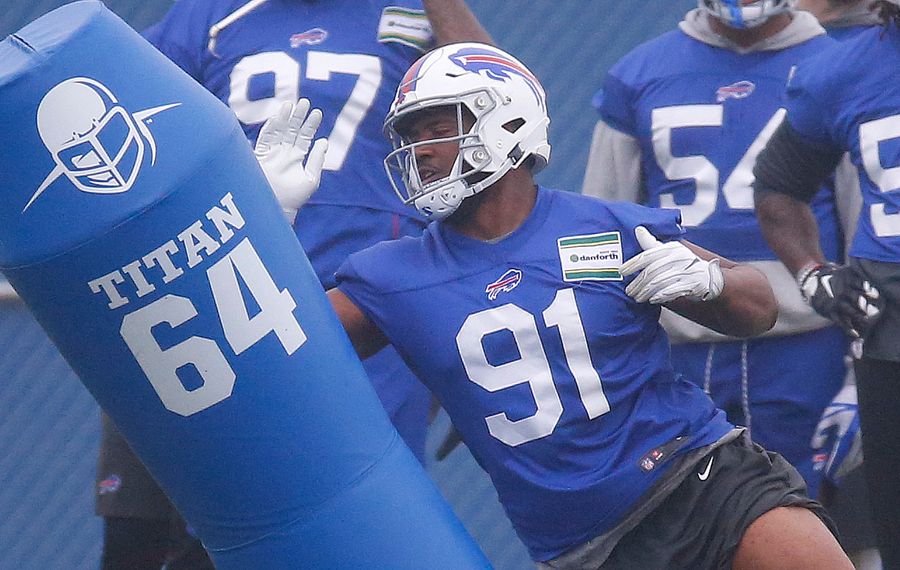 Leslie Frazier’s reaction wasn’t much different than that of Buffalo Bills fans when the team drafted Ed Oliver last month.

“A lot of high fives in the defensive meeting room when he was there at No. 9,” the Bills’ defensive coordinator said Monday with a wide smile. “It was great for us.”

Like everyone else, Frazier wasn’t sure Oliver, the Houston defensive tackle, would make it to the Bills’ pick. Some projections had him going in the top five – perhaps even to the New York Jets at third overall.

When the Detroit Lions took tight end T.J. Hockenson with the eighth pick, Frazier could exhale. The Bills had landed the player they hope will be Kyle Williams’ replacement.

“I don’t think it’s been overwhelming for him,” Frazier said of Oliver. “Meetings, along with what we’re doing on the practice field. You see his quickness, you see his burst. As he continues to get a better grasp of what we’re asking him to do on defense, I think you’ll see more of his athleticism, as well. But up to this point, we’ve been impressed with what we’ve seen, and we’ll just keeping watching his maturation in the next few months.”

Oliver mixed in at times with the first team during Tuesday’s practice, but it’s clear the team is going to take it slow with him in that regard – similar to the approach with quarterback Josh Allen last year.

“The learning curve part for Ed is not only picking up our system and grasping that, but coming to the National Football League, as well,” Frazier said. “One of the things you’ve got to be able to deal with is, this locker room is just so different from what he came from at the University of Houston. The competition is so different, so there’s a learning curve when it comes to that. There are some guys who can match up a little bit better than some of the people he played against in college, so you’ve got to be able to get through that, and then you throw in what we’re doing from a defensive standpoint that’s a different scheme than the scheme that he came from. Being able to grasp that and being able to go out and play fast.”

Oliver was succinct on his impressions of Frazier thus far.

“Great guy, great play-caller, but as of right now, I’m just trying to get better and focus on the little details that are going to help me help the team,” he said. “I’m just a young pup. I don’t know left from right right now. I’m just getting to know everybody, keeping my head down and trying to work.”

One of the questions Oliver will face – at least until he shows it in the regular season – is how he’ll fit playing defensive tackle in the NFL at his listed weight of 287 pounds.

“That’s a good question and one that we’ve talked about a lot in the process,” Frazier said. “Bill Teerlinck, our defensive line coach and I had a lot of conversations about transcending from college football at 280 pounds to the NFL at 280 pounds as a three-technique in our scheme. For us, we don’t necessarily feel like we have to have a 300-pounder or a real heavy guy at that position. We need a guy with great quickness, great get-off, that has strength and athleticism, and Ed has those qualities.

"He has some rare physical traits that we didn’t want to ignore. We feel like his strengths are matched for what we’re looking for at our defensive tackle, especially the three-technique, and that’s what kind of sold us. The more we watched the tape, the more we were around him, we saw the things that we were looking for and the qualities that we needed to really help us at that position."

Of course, the player Oliver is replacing had some of those same questions about being undersized asked about him. It didn’t hurt Williams in his 13-year career.

"They’re built somewhat similar,” Frazier said. “You don’t want to get ahead of yourself as far as the comparison, but when you look at them you can see some of the comparisons. For Ed, when we were going through the process, his quickness, his athleticism, his power, his burst, those things just jump off of the table at you. There have been some other guys at his size who have succeeded in our league. You don’t want to ignore that and you want to take advantage of it if you can. He fits what we do and we’re looking forward to people hopefully giving him some one-on-ones and him having some success against some of the guards in our league."