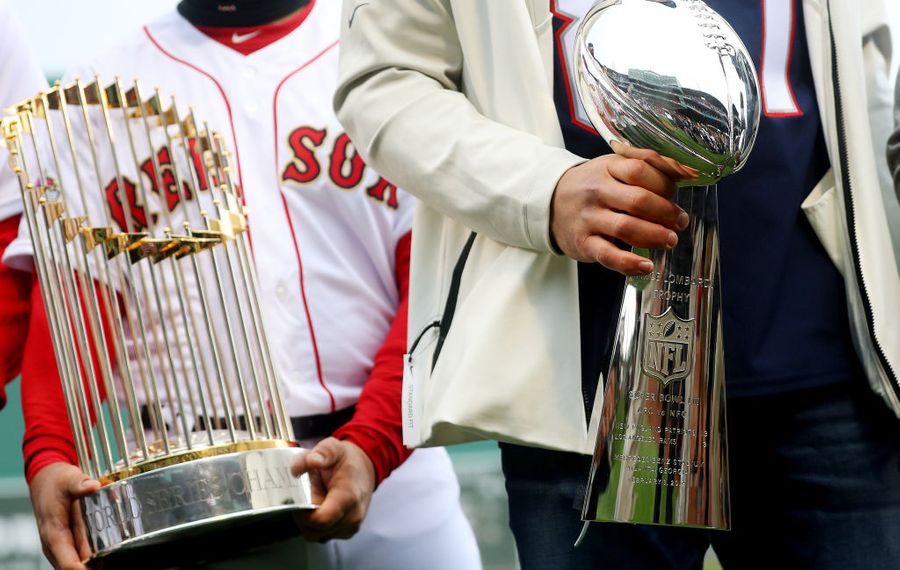 BOSTON – Save some for us.

Buffalo is not the only city that might be sending that message to folks here as the Bruins opened the Stanley Cup final Monday night against the St. Louis Blues.

Forget about Green Bay. Boston has become Titletown and it's reaching the height of absurdity.

No city has had three reigning champions in the four major sports in 83 years. A victory by the Bruins in this series will give Boston that honor as the Bruins will reign at the same time as the Red Sox and Patriots.

The last time it happened was in Detroit in 1935-36 with the Tigers, Lions and Red Wings. And that was before the NBA existed.

Spread the wealth around? As they like to say here, fuhgettaboutit.

"Nope. No way. It is what it is," said a smiling Tony Costa, a manager at The Fours, an institution of a Boston sports bar just up Canal Street from TD Garden that's been in its spot since 1976. "You have to beat us. Not many people have lately."

He's not kidding. For decades really, Boston was Loserville. The Patriots, remember, were cannon fodder for the Bills during the Super Bowl days. The Bruins went from 1972 to 2011 with no Stanley Cups and the Red Sox famously went 86 years without a World Series title until finally breaking through in 2004.

You wanted a title in Boston and your only hope was the Celtics. Things finally changed when Adam Vinatieri's last-play field goal won Super Bowl XXXVI for the Patriots in 2002 and the Red Sox rallied from their 3-0 deficit to beat the Yankees in the 2004 ALCS and then swept the Cardinals in the World Series.

This is the 18th time – the 18th time! – one of Boston's four teams have played for a league championship since 2002. Of the first 17, Beantown has rung up 12 championships (six by the Patriots, four by the Red Sox and one each from the Celtics and Bruins).

"I always think back to being in middle school when the Patriots started winning and the Red Sox started winning and you go to school the next day and wear the gear that day," said Bruins center Charlie Coyle, a proud native of nearby Weymouth who played at Boston University.

"Going to parades. I went to a few growing up. So I was really fortunate to have those great teams here, cheer them on and experience that in Boston a lot. Any time it came around, it's easy to get up. Baseball, football, basketball, whatever. We were very fortunate to have those great teams and now to be here, it's going to be fun to finally play in one."

When the Red Sox won in 2013 a few months after the bombing at the Boston Marathon, they had a lot of non-Bostonians on their side. That was real life. That was perseverance and a team representing its city like few ever had.

But now, it's become sport in Boston to taunt everyone else.

A highway billboard near TD Garden put up last week by the Ace Ticket company blared the slogan "END THE DROUGHT" by pointing out it had been "104 days since the last Boston title."

When the Patriots won Super Bowl LIII in February over the Los Angeles Rams, the Red Sox were quick to tweet, "Ending that 3-month Boston championship drought. Congrats, @Patriots!

"It's great to be a Bostonian," said Bruins captain Zdeno Chara. "I'm sure fans are really enjoying these years. I would be, too. I'm a fan of the Pats, Red Sox, Celtics so it's great to see teams are doing well. For fans, it's super exciting. It's pretty cool to have four major sports. Not every city has it and it's great we show support for each other and fans can enjoy it."

The Bruins are now the focus of the city, set to match the World Series win of the Red Sox over the Los Angeles Dodgers and the Pats' latest Super Bowl triumph.

"It would be pretty special. Those teams did their job and had great years," Coyle said. "It's awesome to watch those teams and cheer them on. We're searching for our turn now to complete this thing. We've got a long ways to go here but that's what we want to bring to the town. I don't think people around here get tired of championships."

Down at The Fours, named after a certain defenseman who scored the Cup-winning goal 49 years ago the last time the Bruins and Blues met in the final, Costa has a classic Boston fan story.

"My grandfather would not watch Game 7 (of the 1986 World Series) after the ball went through Bill Buckner's legs. He knew," Costa said. "Then we had to deal with Aaron Boone hitting the home run in Game 7 in 2003 (to win the ALCS for the Yankees). They won it finally in '04 – and he had died two weeks before.

"But then you win one and you win another and another and it just keeps going. (Bruins goalie) Tuukka Rask is having a great year. Everyone in town talking about it all year that Tuukka can't do it. Well, what are you going to say if he wins? We have a great opportunity here with this team again."

What's the biggest seller on the menu at The Fours? A longtime staple of steak tips and cheese on a braid roll known simply as the "Bobby Orr".

"We'll have a thousand people through here Monday, maybe a little more," Costa said over the weekend. "And that's the best sandwich on the menu. We'll sell 500 of them I bet. It's a winner, too."

When at @TheFoursBar to prep for the #StanleyCup, what must you have? Of course. The Bobby Orr. #Bruins #Stlblues pic.twitter.com/h41IL5yb7a