Mel Szymanski of Lancaster flew 28 missions during his time in the Air Force while serving in Korea, and documented every one them right after each bombing run.

Like a meticulously kept diary, Szymanski "penciled in" details of the mission in blue or black ink and supplemented the narrative with photographs and maps, which he has kept in a binder for nearly seven decades.

"I kept notes after each mission," the 88-year-old veteran recalled recently at his dining room table inside a neat, yellow ranch house on a modest street lined with old oak trees.

"Each time we flew a mission, I penciled it in, the location, the date and the target as we went along. This was not something I did at the end.  I had notes all the way through everything," Szymanski added.

Szymanski confessed to having no idea why he was compelled to document everything, but it appears to comport with his basic character, even today.

Born in Depew – "in a house, not a hospital," he stressed – Szymanski did not harbor dreams of flying an airplane while growing up. Still, the 1948 Depew High School graduate made the choice to enlist in the Air Force at the start of the Korean War.

"See, the Air Force did not draft. The other three branches were drafting at that time ... including the Navy and the Marine Corps. And I wanted to be in the Air Force," Szymanski recalled.

After his eight weeks of basic training at Sampson Air Force Base, near Seneca Lake, south of Geneva, Szymanski was transferred to Lowery Air Force Base in Denver, Colo., in May 1951, where he initially trained to repair arsenals on B-29 planes but wound up becoming an aerial gunner aboard one instead.

"It was great," he said. "I think I would have been very bored with my service time if I didn't fly. When you flew, you didn't know what you had to do during the day. You could wake up here and have dinner across the country, or stay there overnight or for a couple of days."

Szymanski's first mission on Aug. 18, 1952, the day after his 22nd birthday, was among his most memorable – and dangerous. He and his crew took off in stormy weather at 9:20 p.m., headed for Nakwon, North Korea. About 5 miles from their target, they ran into intense anti-aircraft fire, which he meticulously documented hours after the mission. 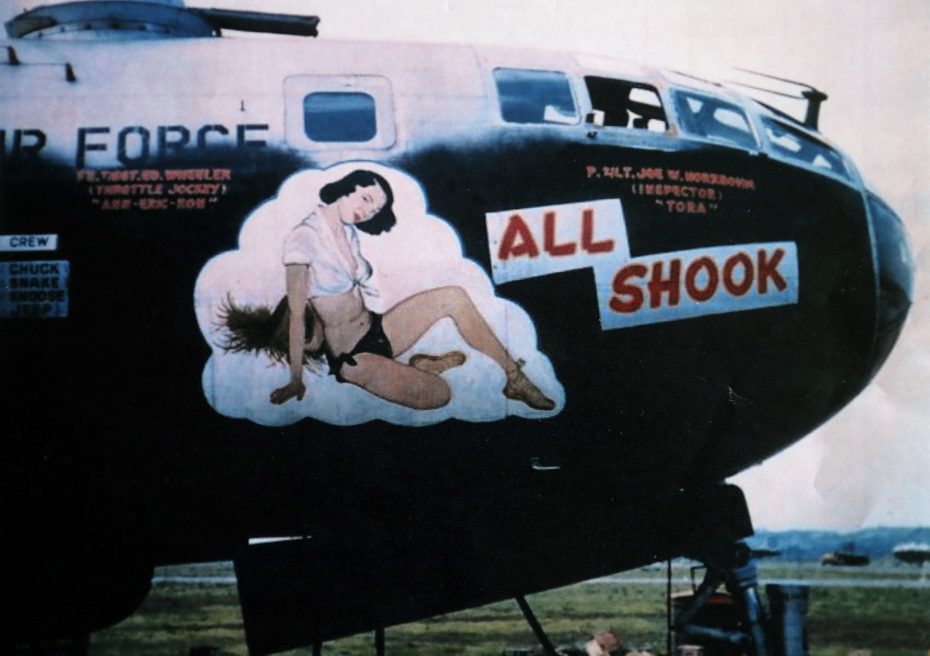 Along with his journal, Korean War aerial gunner Mel Szymanski kept photos of the B-29 he flew in during the Korean War. (Mark Mulville/Buffalo News)

The bomber plane took a direct hit to one of its engines, which lost all of its oil. The plane took more hits to its left engines and suffered damage to the fuselage. Upon returning to base, while over the Sea of Japan, the crew checked the bomb bays and discovered five unreleased bombs.

"We were unable to salvo them, so the central fire control gunner went into the bomb bay and stomped on them until they fell," Szymanski wrote at the time.

"It happens once in a while," Szymanski casually recalled almost 67 years later, sitting at his dining room table.

"I had to do that one time. You just hang on and stomp," he said.

On that first mission, his plane was diverted from Yokota Air Base in Japan, because of dense fog, and forced to land 35 miles away at Haneda International Airport in Tokyo with enough fuel for one landing attempt, which Szymanski described as scary. Ultimately, the plane landed safely about 10 hours after the start of the mission. Once they exited the aircraft, they discovered numerous holes and dents in the fuselage.

"One large hole was directly under my seat," Szymanski said. "The plane was not flyable, so we were bused back to Yokota."

None of this gave him pause or caused him any trepidation about subsequent missions, said Szymanski, who was later dubbed "the Polish Ace."

"When you're that young you don't really realize or think about the consequences. I mean, I was there. I did what I was supposed to do and when it was over, I'm still here, and I'm ready for the next one," Szymanski said.

"My whole life I just cross a bridge when I come to it and I don't think about it," he added.

One subsequent mission on Sept. 12, 1952, was especially deadly, when they lost three B-29 bombers during fighting near the infamous MiG Alley, the name given by the United Nations pilots during the Korean War to the northwest portion of North Korea, where the Yalu River empties into the Yellow Sea.

One of the three B-29 bombers was shot down over the Sui-ho power plant and dam in Yalu on the border between North Korea and China. Another suffered flak damage and crashed in South Korea, and the third disappeared without a trace.

"Yeah, we never knew what happened to it," said Szymanski.

During a third memorable mission that took them back to the MiG Alley on Nov. 18, 1952, Szymanski lost two very good friends in battle, who were gunners on another plane.

About MiG Alley, Szymanski said: "You flew anywhere in there, you were in big danger from enemy aircraft, MiG fighters. We flew in there quite a few times."

His tour of duty ended in December 1952. Upon his return to the States, he and his unit were stationed outside of Sacramento, Calif. Then the whole unit was transferred to the air base in Mountain Home, Idaho, about 40 miles from Boise. There they were retrained to be atomic bomb carriers.

Another standout moment for Szymanski was seeing an atomic mushroom cloud.

"On March 17, 1952, my crew took part in an atomic bomb test at 5:20 a.m. at Yucca Flats, Nev. We flew at 20,000 feet altitude about a half-a-mile from ground zero. It was a terrific sight. The colors were very bright from one end of the spectrum to the other. The cloud must have risen 35,000 plus feet. We all wore dosimeters (to measure the radiation) on a cord around our necks, but we were never told how much radiation we were exposed to," he logged in his journal.

Szymanski was discharged from the Air Force on March 19, 1955.

"My four years in active duty – I was one year in the Reserves – was like a high point in my life, to be honest. I don't ever regret being in. I'm proud of being in. It was a good part of my life," he said.

"I don't know that I would ever want to do it again but, at the time, it was great. The fact that I'm still here talking about it made it greater," Szymanski added.

After his service, Szymanski returned to his job as a research analyst at DuPont in Niagara Falls, where he remained for 11 years. He later sold insurance and worked at a chemical plating plant. In 1971, he went to work for Erie County in the Environment and Planning Department, from which he retired after 25 years in 1995.

His wife of 54 years, Barbara, died in 2011. The couple had three daughters and a son. His eldest daughter also died several years ago, Szymanski said.

Aside from his journal and flight logs, the most memorable things from his time in the Air Force was the camaraderie he developed with his fellow gunners, Szymanski said.

You took care of each other. You did everything together. My crew was together for better than three years, basically the same 11 guys all the time," he said, adding that some became lifelong friends.