WASHINGTON — She was the first Democratic presidential candidate to offer a 100-day plan for boosting families, the first to offer a comprehensive abortion rights plan, the first to release her tax returns, the first to swear off using hacked information in her campaign, and one of the few to propose giving voters money to spend on the candidates of their choice.

None of that has translated into anything close to a first-place showing in the polls. Nor has it garnered much media attention.

But from the back of the pack, Sen. Kirsten E. Gillibrand of New York is building her campaign on ideas as well as imagery.

"She really does have some substantive policy proposals, compared to some of the other candidates," said Douglas Muzzio, a political science professor at Baruch College.

Do voters notice, or care? Campaign experts say voters rarely engage with issues this early in a campaign and instead focus on character and background and the way candidates present themselves.

But Gillibrand is pressing forward with big ideas nevertheless.

"I stand up for what I believe in," she said on the PBS NewsHour last week. "One of the reasons I'm running is that I take on the fights that other people don't."

Gillibrand has been fighting for family-friendly policies and women's rights throughout her decade in the Senate, and now she's building her presidential campaign on those same themes.

Last week, she unveiled her "Family Bill of Rights," which she vowed to get passed during her first 100 days in the White House.

The plan — to be paid for with a financial transactions tax — would provide "baby bundles" including diapers and clothing to all newborns. It would institute a national paid family leave program. It would promote universal prekindergarten programs. It would expand the child and dependent care tax credit, and create a new tax credit for adoption. And it would require that insurance companies cover fertility treatments.

"My plan will lift the financial burden for so many parents and level the playing field for so many kids," Gillibrand said in announcing the proposal.

The plan drew raves from Keith Boykin, a former aide to President Bill Clinton and a current CNN commentator.

"This is pro-life," Boykin said in a Twitter post. "It's not government control of women's bodies. It's government promoting healthy children."

Gillibrand also responded with a plan when several states moved to restrict abortion. She vowed to only appoint judges who support Roe v. Wade, the Supreme Court decision establishing a constitutional right to abortion. She vowed to repeal a federal law barring the use of public funds for abortion. She said she would push for increased access to family planning and continued funding for Planned Parenthood.

"Women deserve basic civil rights in this country," Gillibrand said on "The Daily Show with Trevor Noah" last week. "And they deserve to make these fundamental decisions about their bodies and their families with their doctors."

"Gillibrand did the most the past week," Brett tweeted May 18. "She treated the abortion bans as a national emergency." 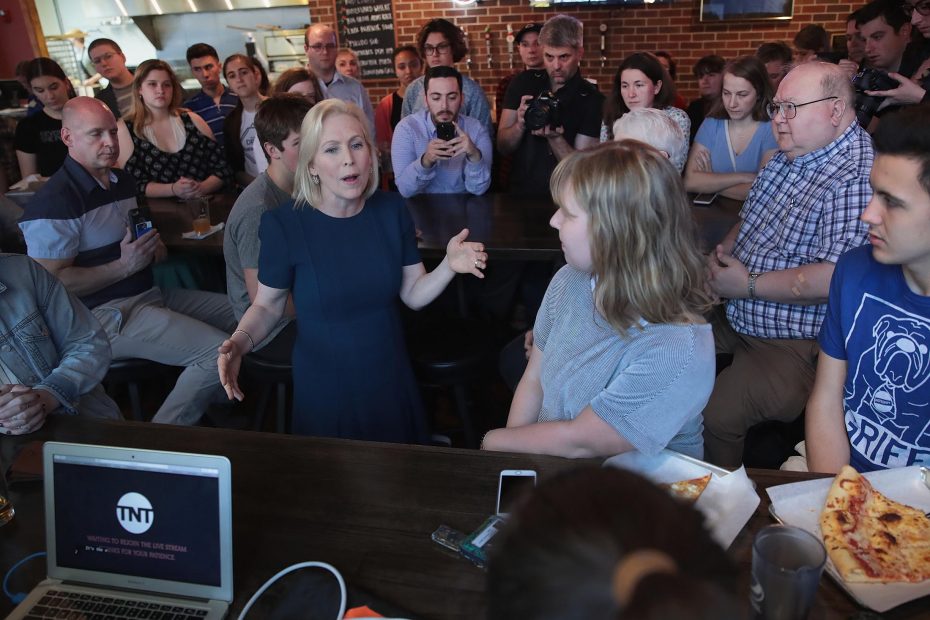 Gillibrand has taken the lead, too, on cleaning up government.

In late March, she was the first candidate to release her 2018 tax return, and she challenged the party's other candidates to do the same.

Similarly, she challenged the Democratic field to pledge to not use hacked materials, and several of her rivals quickly agreed.

"Together we can send a clear message to those who seek to harm our democracy — at home and abroad," Gillibrand said in a statement in which she accused President Trump of "normalizing the idea of ‘taking information from Russians for political gain.' ”

Most notably, Gillibrand proposed creating public financing of federal campaigns through the issuance of "Democracy Dollars." Voters who opted into the plan would be given $200 to spend on candidates in the presidential race, plus another $200 for each Senate and House race where they live. The plan would be financed by increasing taxes on CEO salaries.

The plan aims to reduce the influence of big money in politics.

"Changing the way we fund elections and attacking political corruption is the only way to accomplish any of our boldest, most progressive policies and truly help working families," Gillibrand said in a Medium.com post.

The plan — which is similar to one previously offered by Democratic presidential candidate Andrew Yang — is modeled after one Seattle implemented. And it's popular with good-government groups.

"It provides citizens with a free means to try to influence politics and it encourages participation," said Craig Holman, government affairs lobbyist for Public Citizen. "And it's a noncorrupting source of financing of elections."

Gillibrand's ideas have drawn the occasional headline, but they haven't given her any headway in the crowded Democratic field. As of Friday, she remained mired at 0.7 percent in the RealClearPolitics average of national polls.

Asked why Gillibrand's proposals haven't broken through, several campaign experts said neither voters nor the media focus on policy so early.

"Voters aren't studying for an exam on who has the best policies," said Rose Kapolczynski, a Democratic consultant in California. "Voters are looking at the candidate's character, their experience, and do they think the candidate cares about people like them?"

Buttigieg exploited that moment and extended its media shelf life by saying he had never heard of Alfred E. Newman.

"That's a great response," said Peter Yacobucci, a political scientist at SUNY Buffalo State. "I could not see Kirsten Gillibrand getting off that kind of response right away."

Why does this matter? Because many political pros say such viral moments do more to build a candidate's name recognition than policy proposals do.

"It's all about name recognition," said Linda L. Fowler, a professor of government at Dartmouth College in New Hampshire, the first primary state. "And people don't know who she (Gillibrand) is."

A recent Quinnipiac University poll found that 56 percent of Democrats surveyed did not know enough about Gillibrand to have an opinion of her. Voters were far more familiar with several of her Senate colleagues, including Bernie Sanders of Vermont, Elizabeth Warren of Massachusetts, Kamala Harris of California and Cory Booker of New Jersey.

Political pros attributed that lack of name recognition not to Gillibrand's policies, but to her persona.

"She's certainly well-spoken," Yacobucci said. "She does a pretty good campaign speech. But there's not a fire there."

Warren has been waging a campaign even heavier on issues than Gillibrand's, but Warren's poll numbers have been rising for a month, while Gillibrand's have barely moved.

"For whatever reason, (Gillibrand) hasn't struck that spark yet," Fowler said.

And plans like the Family Bill of Rights probably won't light a fire, either, Kapolczynski said.

"What I've read about, it looks great," she said, "but one of the issues for the Family Bill of Rights is: How many people are actually going to read it?"